Old House Playground are a three-piece blues rock trio from Manchester. Said to incorporate the influence of vocalist Tryfon Lazos’ Greek side with the blues rock of artists such as Mike Bloomfield and Jeff Beck, the band certainly sounds intriguing pre-listen. References to Nick Cave and Tom Waits also spark a sound that could most certainly sound fresh and exciting.

However, despite all these influences and references, what is ultimately disappointing about this record is just how straight-up blues rock it is. Only an addition of non-traditional rock instruments such as an accordion and a tzouras [1] on songs such as ‘All Day Today’ and ‘The Great Escape,’ with some angular melodies played by singer/guitarist Tryfon Lazos, actually bring any of these influences to light. Yet, although well-orchestrated, it just doesn’t bring out anything new from the stoner-blues tracks we’ve been hearing from the rest of mainland Europe for years. 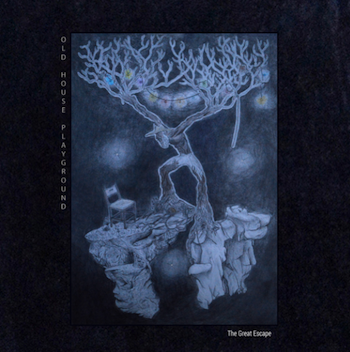 Contrived does not necessarily mean bad, however. There’s some excellent songwriting within the EP, with the horn sections on the first two tracks being wonderfully catchy. The vocals and harmonies are fantastic, the drums super groovy; these tracks show the band’s expertise at their craft. ‘Polite Fiction’ is almost cheeky in its structure, with stop-start moments that give the song a creeping, mysterious vibe. Second track ‘Stardance’ is also a standout for similar reasons. Although less skulking and more straight-forward in comparison to “Polite Fiction”, the track entertains, with Lazos’ vocals (and lyrics, “Love will get you to the bones!” is definitely a great hook) being top quality. From the sustained vocals in the verse, to the lax yet powered groove of the chorus, it’s great from start to finish. The influence of the Greek side though? That’s still not particularly apparent. And those who are used to hearing the more chilled-out tracks by Stevie Ray Vaughn may find little interest in such a song by the trio.

It’s a shame that the last two tracks are so forgettable. Although the Greek influences are more stapled within their sound, the songs themselves accomplishes nothing that the first two tracks haven’t already. Yes they’re played at a different tempo, slightly darker in texture and sound, but structurally, it’s a standard blues rock riff, verse-chorus structure, and pretty guitar solos, repeated ad nauseam.

I was hoping for a bit more; a bit more ambiguity, a bit more surprise. But ultimately what Old House Playground have created is a well-produced, well-written blues-rock record that is still disappointingly predictable. Let’s hope that future efforts explore more of the Greek folk influences, and add something refreshing to the formula that The Great Escape exhibits well.

Footnotes:
1. A Greek instrument related to the bouzouki. Demonstration of a tzouras being played.