Given new-found courage after Beyond’s success, Omnium Gatherum have celebrated their 20th anniversary with a mature but occasionally fragmented album. As the follow-up to Beyond, which was widely praised for its melodic death metal style that found a perfect blend between ferocity and passion-fuelled beauty, it’s no surprise that Grey Heavens is a tad more ambitious. Throughout Grey Heavens, Omnium Gatherum’s self-confessed desire to be ‘adult-oriented death metal’, as per their Facebook page, gives them a sophisticated edge over many death metal acts. However, their stitching-up of genres can make for disjointed sections that interrupt the otherwise uncanny fluency of the album.

Grey Heavens holds no small degree of clever songwriting. Omnium Gatherum blend together influences from progressive rock, hints of AOR, and of course a slab of death metal, and for the most part balance these genres well. When they do, the album’s 10 tracks interweave with a fluency that sustains interest throughout. The intense but abrupt end of opener ‘The Pit’ segues into album highlight ‘Skyline’ with such little hesitation that you could be forgiven for thinking it’s the same song. This may sound disjointed, but the hard-hitting intro of ‘Skyline’ maintains the intense tones of ‘The Pit’, demonstrating the enthralling fluency of the album. 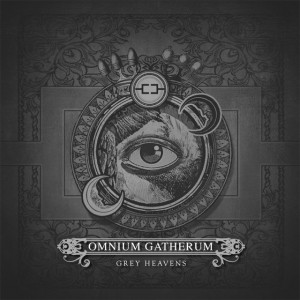 Omnium Gatherum’s melodic brand of metal keeps them from straying too far into overly brutal or complex areas that would otherwise interfere with their desire to be sophisticated. The well-written and technically proficient guitar solos of Markus Vanhala and Joonas ‘Jope’ Koto are smartly place in ‘Frontiers’ and ‘Rejuvenate!’ to balance the songs’ emotional impact with the more brutal nature of death metal. It’s refreshing to see solos enhance the passionate tone of a song rather than simply serving as a piece of showmanship, and Omnium Gatherum do this with ease.

Grey Heavens features a lot of the passion that drove Beyond, be it the thundering verse of ‘Frontiers’, the head-bobbing riff of ‘Skyline’ or the thick sound and nimble lead guitars of ‘The Great Liberation’. However, when the band overlay the more ambient keyboards of ‘Storm Front’ with heavier death metal passages, it sticks out as a tad strange. Elsewhere in a similar fashion, blending dark and light tones in ‘Majesty and Silence’ makes for an incoherent listen.

Omnium Gatherum’s ambitious sewing of genres can often be balanced to create a significantly satisfying mash-up, born from mature song-writing and a passionate atmosphere. While in places this mash-up falls short and makes for disjointed sections that interrupt the otherwise impressive fluency of the album, Grey Heavens‘ better passages show that the six-piece have honed their heavy death metal, which is all but perfected by a melodic edge.