Following in the tradition of any number of one-man-metal projects [1], South Africa’s Ophiuchi has delved deep and dredged something dark, obsessive and entirely immersive from the reaches of his psyche. Bifurcaria Bifurcata reels in elements of folk, progressive, electronica and sludge before spitting them out again in a series of engaging atmospheres that are deeply rooted in black metal soundscaping.

First impressions are often the hardest to divest oneself of, and even after multiple spins, mine stays unmoved: Ophiuchi is a much darker contemporary version of what Led Zeppelin could have been. Perhaps it’s the psychedelic aspect, perhaps the avant-garde experimentation; it could even be the reverb-rich, tastefully delayed guitar recalling the classic ‘No Quarter’ that ‘Vestibule’ begins with [2], but the impression remains constant throughout the album. Even as the instrumentation and feel shifts towards something more along the lines of early 2000s EBM – the first strains of vocal treatment evoke the likes of :Wumpscut:’s Embryodead album. This in turn evolves into a massive wall of sonic texture that is entirely in keeping with post-black sensibilities – and this constant, organic redefinition is what sums up the record for me: a protean synthesis of sounds flowing seamlessly into one another, sometimes melding, sometimes co-inhabiting the same space, and most often, remaking themselves as something entirely different. The coda of ‘Vestibule’, for example, occupies a flux of dirty sludge bass and semi-electronic snarls that nevertheless ties in perfectly with the variation on the intro theme that immediately preceded it. 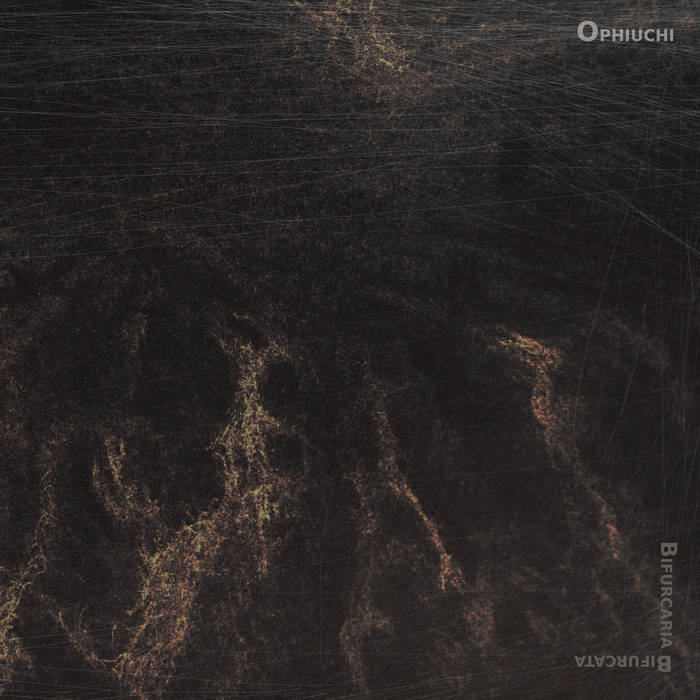 The title track (named for a species of seaweed) is the magnum opus of this four-track record: a hefty fourteen-and-a-half minute slab of sonic texture. In an echo of Wolves in the Throne Room or Agalloch, the track builds natural, folk-inspired serenity before a full-scale low-end black metal assault goes straight for the jugular – an assault the likes of Archgoat would be proud of. This trails off into schizophrenic scatterings of bass-led musical meanderings, tied together with the rasping, heavily treated vocal that becomes another layer of texture, translating at a subconscious level. This departure from the scream/growl aesthetic of most black metal vocals is a welcome one, but it does make interpretation of the lyric content quite impossible at times. The sensitive keys that carry ‘Bifurcaria Bifurcata’ into ‘Heliopause’ impart yet another dimension to this already dense composition – resulting in a classical overtone that is present in a lot of contemporary black and death metal, but remains underexplored. Cult of Fire’s 2014 EP celebrating their Czech heritage and the compositions of Bedřich Smetana, Čtvrtá Symfonie Ohně, is one of the better examples of the successful integration of black metal and classical composition [3] but Bifurcari Bifurcata comes close.

‘Heliopause’ is well-named, giving the listener a well-earned breathing space between the massive densities of ‘Bifurcaria Bifurcata’ and ‘Obol’ – a track that immediately leaps out with its delightful flamenco strings (again, reminiscent of the aforementioned Wolves in the Throne Room) that give way to the most anguished vocals on the album – rending growls that border on DSBM in their intensity. The ambient tones that resonate throughout create more favourable comparisons – in this case Urfaust springs most readily to mind, especially the Verräterischer, Nichtswürdiger Geist album.

In summary, there is just too much going on on Bifurcaria Bifurcata for one textual response: each subsequent listening reveals new nuances and deeper aspects, as well as notable similarities (Blut Aus Nord’s dissonance, Sólstafir’s melodies, et cetera) with other artists’ work, yet the whole remains fresh and original in its delivery. The predominance of the bass guitar in the mix [4], both as a rhythmic and a melodic instrument, are fairly unique in black metal, though, and this may be what really sets Ophiuchi apart from other progressive forays into the post-black environment. While the album is undeniably beautiful, I do fear that its cerebral nature won’t garner it the praise it deserves within traditional ‘metal’ circles, or even a black metal audience in general – it’s far more likely to appeal to the progressive and avant-garde end of the metal spectrum, even with its overriding atmosphere of bleak discontent and ennui.

FOOTNOTES
1, The man behind the music is happy to point out the finer points of his relationship with black metal:
“To paraphrase Joseph Campbell, dreams are personalised myths, myths are depersonalised dreams. Black metal seems, to me, uniquely (although not exclusively) equipped to express this kind of relationship. Perhaps it’s the reason for the abundance of hermetic, non-performing, one-man black metal projects.
I find the aforementioned relationship to be the common denominator for black metal that exudes authenticity. Any black metal record that fails to facilitate a marriage between its own mythology and the private mythology of the listener will be exactly that: another black metal record. You could perhaps refer to this as ‘identifying with the music’, but I think such a statement lacks subtlety and conjures up images of angsty teenagers. It’s really more a subconscious process of gradual assimilation that often never happens, no matter how critically-acclaimed the material.”

2. Led Zeppelin are, however, absent from the answer given when asked about his conscious influences while crafting the album:

“Compositionally-speaking I don’t obsess too much about the output of others. My only requirement is that a composition should resemble, in a manner of speaking, a living organism that I can nurture and grow as time goes on. If it feels forced, if it starts snapping at my heels, I drop it in a jar of ether and move on. I might perform a dissection later on but it’s unlikely.
The opposite is true of my tastes in sonics. I consider myself a connoisseur in textures, and I’ve harboured, at one time or the other during production, deep-running obsessions with the sonic qualities of records by Portal, Yob, Disma, King Crimson, Tool, Khanate, Boris, early Deftones, High on Fire, Ravi Shankar, Gustavo Santalolla, early Meshuggah, early Swe-death buzzsaws and non-Cold Lake Celtic Frost.”

3. This arrangement of Chopin’s ‘Prelude in E Minor’ is also a worthy contender, though.

4. Ophiuchi’s history as a bassist, in his own words, may partially explain this:
Around a decade ago, I became the replacement bassist for a Pretoria-based band with an alt-90’s aesthetic. I knew from the outset that we’d need, at the very least, a Faustian pact to attain even modest levels of success. The music (not mine) was well-written and the simplicity thereof translated to a compelling live show, but the entire operation suffered from interpersonal problems further exacerbated by chronic absenteeism, chemical adventurism, mercurial personalities, and a drummer with an affinity for breaking limbs critical to drumming during his frequent Moto-Cross excursions.
Eventually I adopted, along with the guitarist / songwriter, the music as a pet studio project with the intent of finishing an album whilst simultaneously developing a production / engineering / mixing skillset. We never completely finished the album, but the technical knowledge proved invaluable. From there on I set off on my own to write and record Bifurcaria.