Trending
You are at:Home»Features»Premiere: The Sound That Ends Creation – Uncle Sam Wants You! (To Go Fight For A Corporation)
By Mark Angel Brandt on October 30, 2017 Features

The Sound That Ends Creation, AKA one pissed-off guy outta Texas. Chris Dearing gave the project its title with a purpose in mind – ‘an uncompromising assault’ which combines all manner of extreme music. So naturally we had to bring a new slice of his music to your ears, as gluttons for twisted sounds.

After one album entitled We Are the Burden – which admittedly flew under our radar – Chris has been hard at work hammering out a new record, marvelously entitled Fitting Through the Crawl Space Between Rhyme and Reason. The sardonic sense of humor which permeates Agoraphobic Nosebleed and other experimental, extreme bands is here in full, from the song titles (‘I Love the Way Your Hair Looks After a Nuclear Holocaust’ is a particular howler) to the insertion of various clips ranging from Eisenhower’s farewell speech [1] to Wayne’s World 2. [2] 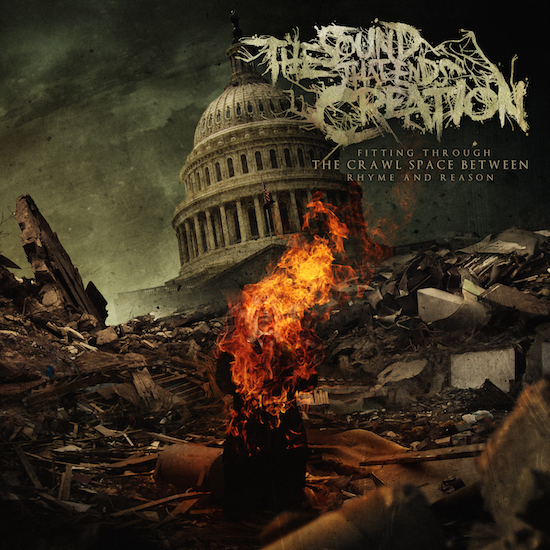 But what about the music? Well AnB is a good place to start in the cacophony of grindcore, death metal, mathcore and gods know what else that has been unceremoniously dumped into the mix. Railing against the high quality production which leaves a lot of records sterile, The Sound That Ends Creation aim for a rawer mix that still lets everything shine through – even the bursts of frenetic inhuman drumming that roll around like the Tasmanian Devil. The song we are premiering, ‘Uncle Sam Wants You! (To Go Fight For A Corporation)’, is a dissonant, noodling adventure punctuated with guttural grunts and barks of anti-capitalist vitriol: “Why the hell should we lay down our lives for your profit margin?”

Check out the potent one-minute blast below:

There are a couple of other tracks streaming on The Sound That Ends Creation’s Bandcamp page, check that out here and follow his movements on Facebook. Fitting Through the Crawl Space Between Rhyme and Reason will be released as Pay-What-You-Want, and physical CDs will be $5 USD. There will also be a shirt design available.