Corby’s finest may have been back a couple of years now, but after festivals, tours and last year’s comeback single ‘Halfway To Hell’ in the bag, the time has come for Raging Speedhorn‘s real test: a new full-length album, funded by the fans. [1] Lost Ritual is the punk-sludge metal bruisers’ first record in nearly nine years, and the first to feature original vocalist Frank Regan since 2005’s How The Great Have Fallen. Now, with this latest lineup (also featuring Charger’s Jim Palmer on guitar) settled after this gradual comeback, the focus among fans has been whether they can bring back the chaos and noise that made them one of the leading lights in the late 90s UK underground metal scene.

From the opening riffs of ‘Bring Out The Dead’, it’s very much apparent that the answer is ‘yes, they can’. Everything that made their first three albums such vital listening is there. To have the dual angry vocals of Regan and John Loughlin back after all this time sounds great, and the way they bounce off each other makes it seem like they’ve never been away. ‘Halfway To Hell’ seems like an old track by now, but this new version has taken an already top track and improved on it. Now it has the feel of a classic; a ‘Chronic Youth’ or ‘Thumper’, a more upbeat track that’s already become a live favourite. The album is off to a winning start. 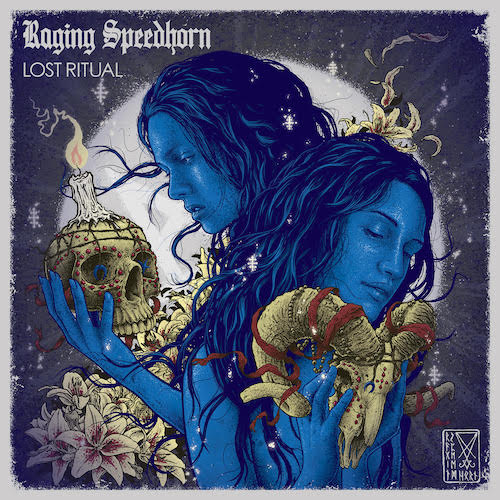 There is a drop in pace for ‘Evil or Mental’, a reminder that – as good as they are at putting together pissed-off punk-fuelled sludge – Raging Speedhorn also have a heavier doom side in their arsenal. Tracks that are a lot slower and heavier, but still fit in well with everything around them. ‘Ten Of Swords’ slows it down even more, featuring the heaviest part of the album so far during the last couple of minutes. After upping the pace again for a couple of tracks, it slows right back down for the closing track ‘Unleash The Serpent’, complete with spoken word vocals and an edge that they arguably haven’t shown since ‘Random Acts Of Violence’ from their eponymous début in 2000. [2]

There really isn’t any negative side to this album; it’s one that demands a full spin every time it’s played. It has elements of all the ingredients that made them such a good prospect back in the day, but it’s a lot more than just a rehash of old ideas. The band have built on the growing momentum since the reunion, and Lost Ritual sits well in a strong catalogue of albums. With something as good as this behind them, and upcoming tours and festival appearances, there is reason to believe that they could be just as successful as before, and maybe even more so.