There’s a fine line to be walked between staying true to the core aspects of a musical style, and simply being generic. To write an album that clearly fits in with a chosen sub-genre, yet isn’t derivative of that style, is easier said than done. At the same time, experimenting too much with a sound can result in a record that is too unfocused in its approach, and makes for a disjointed, unsatisfying listen. Credit must be given, then, to Dutch one-man act Abomnium, whose fourth album A Hollow Path combines black/death sounds with aspects of Eastern European and modern Polish black metal in seamless style. The result is a record that builds upon the ones preceding it, and projects a strong sense of identity and purpose in a genre that is often lacking in both.

Sole member Sapient has been releasing albums as Abomnium for six years now, and the resulting experience is on display throughout A Hollow Path. Whilst that title may allude to a sense of pointlessness and dissatisfaction, those are two descriptives that could not be levelled at the album. The record exudes confidence throughout its 42 minutes, whether that be through the captivating Winterfylleth and Drudkh-esque riffs that make up a considerable component; the Mgła-esque melodies; or through Sapient’s vocal delivery, his growls both powerful and clear. A feeling of forward moment constantly drives the album forward, and it’s hard to resist the sense of energy and inspiration it creates. 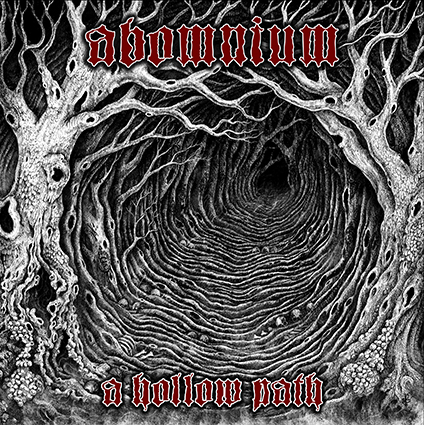 Were that all that A Hollow Path possessed, then it would still be a worthwhile album. What raises it above similar albums – and above the rest of Abomnium’s back-catalogue – is the way that small flourishes and transitions into different styles all come together smoothly and naturally. These are not in themselves wholly new developments to the Abomnium sound, but they are handled with greater skill and songwriting talent than was previously the case, and contribute greatly to the captivating atmosphere of the album. This atmosphere is largely consistent, even as the sound of the album shifts and changes across songs. Opener ‘Vigils’ is a prime example of how Abomnium combine a whirlwind of riffs with subtler movements; a haunting, unsettling atmosphere hangs heavy over the song and is maintained across the album. By contrast, second song ‘The Lies That Bind’ is more direct, with the death metal aspect of Abomnium’s sound coming to the fore; ‘A Plague Upon Your House’ charges ahead with thrash-like tempos and fury; whilst ‘Blood Court’ opens with a heavy, crushing movement that is not far removed from blackened doom, before smoothly transitioning into a riff reminiscent of Eastern European black metal. It’s remarkable that the album maintains its atmosphere and flow despite touching upon so many different styles and aspects.

For all their considerable ambition, and as good as they were, previous albums such as Coffin Ships and Solace For the Condemned felt as if they didn’t reach the heights they were aiming for. That’s not the case with A Hollow Path; the riffs are more distinctive, the melodic leads and flourishes more confident, and the overall songwriting is vastly improved, with a greater sense of nuance and less reliance on speed alone for the songs to succeed. The production by Chris Fielding (who has previously worked with bands including Winterfylleth and Primordial) also helps immensely, giving each instrument and Sapient’s vocals the strength and space they deserve, without taking away the rough edges.

Whilst many black metal bands are often dragged down by either their lack of adventure, or inability to smoothly bring together different styles and shifts in sound, Abomnium have created something notable in A Hollow Path. Black metal is a crowded scene, and it can be easy for worthwhile albums to be lost amongst the noise, but A Hollow Path demonstrates more than enough talent and passion to hopefully avoid that fate. After several years of coming close to unleashing something incredible, Abomnium have lived up to the promise previously hinted at, and the results are superb.