Trending
You are at:Home»Reviews»Metal»Arch Enemy – Will to Power
By Nick Dunn on September 8, 2017 Metal, Reviews

Band: Arch Enemy
Album: Will to Power
Record label: Century Media
Release date: September 8th, 2017
Website & Facebook
Purchase/Download
Tracklisting:
1. Set Flame to the Night
2. The Race
3. Blood in the Water
4. The World is Yours
5. The Eagle Flies Alone
6. Reason to Believe
7. Murder Scene
8. First Day in Hell
9. Saturnine
10. Dreams of Retribution
11. My Shadow and I
12. A Fight I Must Win

Ten albums into their career, Arch Enemy have produced one their strongest ever albums in Will to Power. The second album with Alissa White-Gluz on vocals, it improves on the shaky foundation of War Eternal, offering up punishing death metal underneath an increased emphasis on melody through the use of diverse instrumentation and – surprisingly – clean vocals.

The urgent fretwork of intro ‘Set Flame To The Night’ sets the pace for the album, which does not let up through the searing death metal guitar shredding of ‘The Race’ and ‘Blood In The Water’. The bass-driven brutality of earlier albums is still very much apparent here, providing a solid base on which Michael Amott can shred beautifully, joined by ex-Nevermore guitarist Jeff Loomis. The overall guitar sound is cleaner, more melodic, and not quite as heavy as it was on Doomsday Machine or Rise of the Tyrant. This is not a bad thing, however: lead single ‘The World Is Yours’ is made into a rousing, anthemic song through the guitar melody shared between Loomis and Amott. The twin-guitar attack has long been a staple of Arch Enemy’s sound, and the chemistry between Loomis and Amott makes for some fantastically furious riffs, particularly on the opening tracks. Although Loomis’ musical ideas were not included on the album, him joining Amott on lead guitar gives the melodic line a hefty punch.[1] 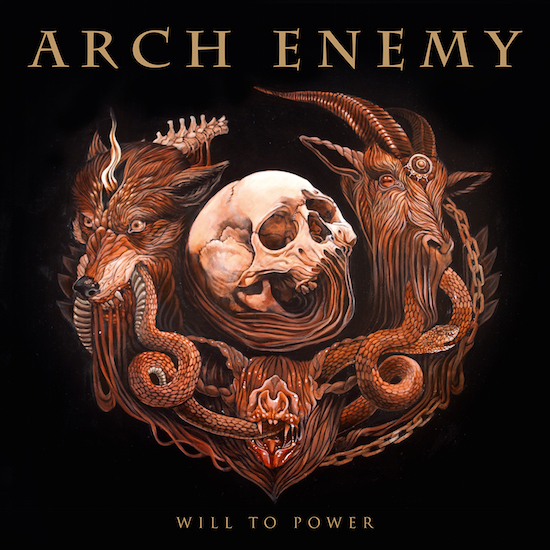 Probably the biggest talking point on this album is the use of Alissa’s clean vocals, given the most airtime on ‘Reason To Believe’. Powerful as her harsh vocals are, she demonstrates an equally potent clean voice that channels Lzzy Hale’s powerful style. Those who expressed fear that this might damage Arch Enemy’s sound need not be afraid. While the clean vocals do make for a more melodic sound, they also plumb emotional depths that neither Angela Gossow nor Johan Liiva were really able to reach during their tenures. The band have also deployed the vocals well, sprinkling them carefully through ‘Reason to Believe’ and even marrying them with her ferocious growls for a seriously rousing closing section. It might be that the critical response alters how they are used in future, but I for one look forward to more of Alissa’s clean vocals. Not only do they make the song more emotive, they add a richer texture to the music, making it simultaneously brutal and melodic – the perfect balance for Arch Enemy’s melodic death metal sound.

The lyrics that go with these new vocals, however, are classic Arch Enemy. While they have never made any explicitly topical political songs, there has been a consistent thread of rebellion against mainstream politics through many of their songs, peaking on Khaos Legions (an album themed on political uprising). This is still the case here:

“There’s blood in the water, there’s fear in the air, an eye for an eye, a tooth for a tooth, and we’re all running scared… round and round we go, where this will end nobody knows”

from bruiser ‘Blood In the Water’ is easily applicable to the current nastiness of mainstream world politics. Bloodshed anywhere in the world is seized upon by unscrupulous media outlets to whip up fear, which leads to vengeful attacks like the van attacks in London and Barcelona – and it feels like a cycle of violence that is leading us on a dark path into a terrifying future. [2] Elsewhere, ‘The World Is Yours’ exhorts listeners to ‘use your mind, take control, feel the strength, rise from within’ to conquer the world through positive self-affirmation. This kind of message could easily have been lifted from ‘I Will Live Again’ off Rise of the Tyrant. The most positive message comes from ‘Reason To Believe’, and I will let the lyrics speak for themselves:

Backing these lyrics is a more diverse instrumentation than on previous releases, in keeping with the album’s greater emphasis on melody. The use of a piano lends a mournful air to the end of second single ‘The Eagle Flies Alone’, and Jens Johansson of Stratovarius fame plays harpsichord on instrumental interlude ‘Saturnine’, and the following track ‘Dreams Of Retribution’. The use of an instrumental interlude to separate the halves of an album is nothing new to Arch Enemy. Unfortunately, tracks like ‘Vultures’ and ‘Night Falls First’ from Rise of the Tyrant, or ‘Machtkampf’ and ‘Slaves Of Yesterday’ from Doomsday Machine feel more like B-sides, and this is still the case on Will to Power, but to a lesser extent. Following ‘Saturnine’, ‘Dreams Of Retribution’ is a scorcher of a track, with eerie synth choirs and Johansson’s sinister harpsichord lending an atmospheric edge to the furious guitar attack. However, it outstays its welcome by about a minute. Similarly, while ‘A Fight I Must Win’ is an epic, rousing closer, rounded out with a gorgeous strings arrangement, those same strings sound a tad out of place. They don’t feel integrated into the sound in a balanced way, so while it isn’t jarring, it still sounds ‘off’, for lack of a better word. If this is the direction the band is going to take in the future, it’ll be an interesting one to watch, so long as they tread the balance carefully.

Aside from the somewhat awkward closing tracks, it must be said that the increasingly diverse instrumentation, notable use of Alissa’s powerful clean vocals, and the ferocious twin-guitar attack of Amott and Loomis all combine to make an epic melodic death metal album. Will to Power is easily one of Arch Enemy’s best albums to date, and in my view certainly one of the best albums of 2017.