For an island with a relatively small population, Iceland is making a very loud noise in the metal scene. It might soon be a rival to Finland for number of metal bands per capita, and expansive, atmospheric black metal group Auđn are only adding to that number. Their latest album Farvegir Fyrndar is a paean to the bleak, but beautiful landscape of their home country.

Bleak almost sums up the album as a whole. The thunderous drums that open ‘Veröld Hulin’ and the album at large give way to punishing blast beats, skilful tremolo guitar-playing in the vein of Winterfylleth, and vocalist Hjalti Sveinsson’s tortured rasps. The breakneck pace, thus established, never really lets up over the rest of the album. An enjoyable melodic break in the dual guitar attack of Ađalsteinn Magnússon and Andri Björn Birgisson, comes towards the end of the song, adding some much needed respite from the furious black metal assault. 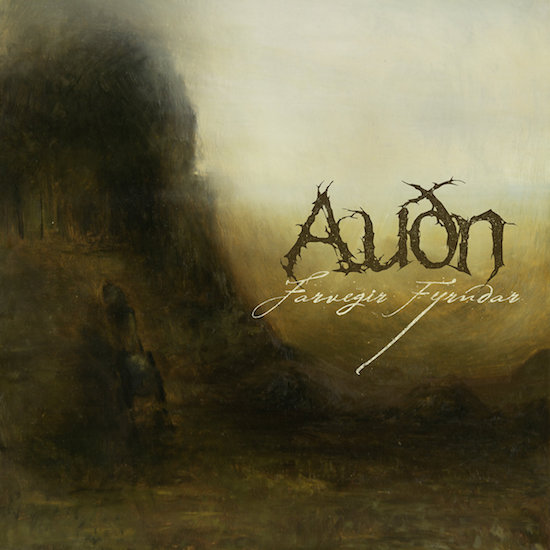 It is this that defines their sound: the black metal may be made expansive and atmospheric by the layering of tremolo guitars and abyssal vocals, but it is still a punishing sound built on the shoulders of second-wave musicians like Emperor. The lo-fi ambience is polished away, but the blistering drums and frenetic guitar playing are still key ingredients in the more melodic sound. The musicianship is very tight: Sigurđur Kjartan Pálsson’s tremendous drumming keeps the guitars in check, and the tremolo playing carries the melodic line, save where one or other of Magnússon or Birgisson takes a more melodic solo. Sveinsson’s rasps add serious bite to the layers of bleakness built by the music beneath it.

There are, unfortunately, two big problems with Farvegir Fyrndar. Everything works, but it adds nothing new to the genre. Any one of the songs could find a home on an early Winterfylleth album. It offers little in the way of innovation, and retreads ground so well-worn that it could easily be mistaken for the ‘Ancient Riverbeds’ that the album takes its title from. The other serious problem is how similar the songs all sound to each other: at times, it really does feel as if they merge together into one. The album actually repeated itself before I realised I’d heard ‘Haldreipi Hugans’ already. It isn’t until the opening of ‘Ljósaslæður’ that the pace really varies, slowing somewhat to really work the atmosphere of a very grandiose opening. However, the song soon regresses into another aural assault of expansive black metal.

This is not to say it is a bad album, however. The atmosphere created actually feels frostbitten, which is an adjective used all too freely in discussions of third-wave black metal. Sveinsson’s rasps feel like the bite of a blizzard, which certainly helps evoke the bleak Nordic landscape. There are moments of beauty on the album as well: the opening of ‘Eilifar Nætur’, for example, exhibits some very pleasant guitar work that conjures a mournful, yet menacing atmosphere. The denouement of ‘Skuggar’ shows off perhaps the best guitar work on the album, and serves to show the beautiful music Auđn can make when they rein in their attack on guitar strings and drum skins.

However, these are but good moments lost in the maelstrom, small eyes in a storm. Farvegir Fyrndar gets the job done, but it could be far better if more was done to work on the melody and atmosphere and less was given to the fury of second-wave black metal.