Based on the evidence presented across the year, 2017 has been the year in which the death metal old guard prove that they’re still as vital as ever. Whether it be Suffocation‘s continued mastery of technical brutality [review]; or Cannibal Corpse‘s ceaseless gore-obsessed violence [review]; or Bolt Thrower and Benediction veterans offering tribute For The Fallen under the banner of Memoriam, 2017 has been a good year for genre veterans. Closing the year in similar style are Autopsy, celebrating their 30th anniversary with mini-LP Puncturing the Grotesque. And much like many of their contemporaries, this new release sees the band continuing to do what they do in classic style, making this a record full of dirty, wonderfully riff-heavy death metal. 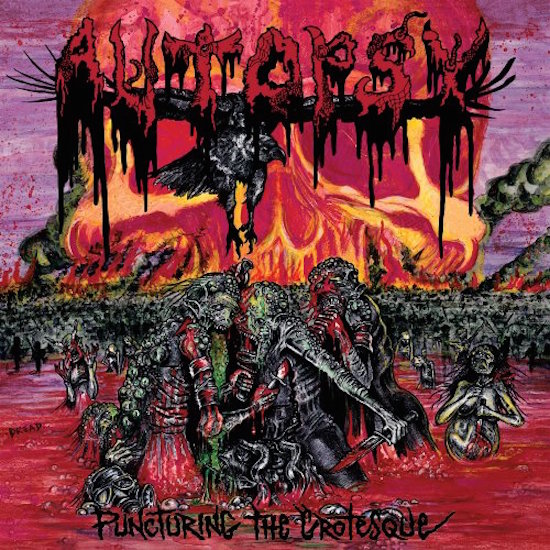 Not that it starts in such a way. Following mood-setting introductory track ‘Depths of Dehumanization’, the record throws an early curve-ball with the title track, that has the kind of speed and energy more typically associated with thrash. It’s an unusual start, considering the reputation Autopsy have for recording music that feels as if it’s heavily coated in gore and dirt, rather than moving with the speed of an apex predator. There’s still enough Autopsy trade-marks there for it to largely fit with expectations. Even at this speed, the riffs are dark and morbid, with the weight of a tomb behind them, and the production only enhances that feel of dirt that Autopsy have made their own. But it’s a surprising way to start the record off, and on first listen had me checking that I had the right record playing. It does, however, make one thing very clear: no matter the fact that these are songs about war, death, and zombies, delivered via the dirtiest, weightiest of death metal, Autopsy are here to have fun.

From there, the music largely follows expected lines, though the sense that the band are thoroughly enjoying themselves is never far away. Even typical Autopsy fare such as ‘The Sick Get Sicker’ and ‘Corpses at War’ – heavy, morbid, full of the stench of death – are delivered with an energy and enthusiasm that, even at their slowest, is as infectious and difficult to resist as the zombie plagues from their songs. The album does end on an interesting note, with a cover of ‘Fuck You!!!’ by Bloodbath – an 80’s thrash band from California, not the Swedish death metal band – that delivers a final dose of high-energy, punked-up aggression, but the real draw is what comes before it. [1]

Yet throughout, it’s hard not to feel like Autopsy aren’t really pushing themselves. As great as these songs all are – and any fan of Autopsy’s past output will thoroughly enjoy Puncturing the Grotesque – it does, at times, feel a bit by-the-numbers. This is nothing new with Autopsy; their post-reformation material has been enjoyable, continuing their legacy without really building upon it. Which, actually, is fine. The band are evidently enjoying what they do, and it’s hard to imagine how Autopsy could expand upon the sound they have honed these past 30 years without risking sounding like a different band entirely, as evidenced by the title track here. Best not to think about that, though. Autopsy have never really been a band to push the genre forward; they have always been about the crude power of the riff, of depraved vocals, and pummelling drums; of death metal as a B-movie, rather than some grand artistic masterpiece. As such, Puncturing the Grotesque is perfectly apt as a celebration; it won’t win over any new converts, but for fans it’s a record that hits all the right notes, delivering a delightfully morbid celebration of entrails, zombies, and death metal.

Footnotes:
[1] It is worth noting that the version of ‘Fuck You!!!’ here is different to the one that will be released on the coming split between Autopsy and Bloodbath.