If you have never experienced Blut aus Nord before, I really am not sure if recommending them [1] is the wisest move: atonal, looming and massive, their approach to atmosphere is unsettling, to say the least. Even on a relatively straightforward album like this latest, Deus Salutis Meae – as opposed to the hugely conceptual avant-garde approach Blut aus Nord is famous for, typified by 2003’s The Work Which Transforms God – the brooding misanthropy can easily overpower the music itself. What has changed from early works (like 1995’s Ultima Thulée, or 2001’s The Mystical Beast of Rebellion) is an acknowledgement of more conventional song structures, but the compositions themselves are as untamed and unaccommodating as ever. 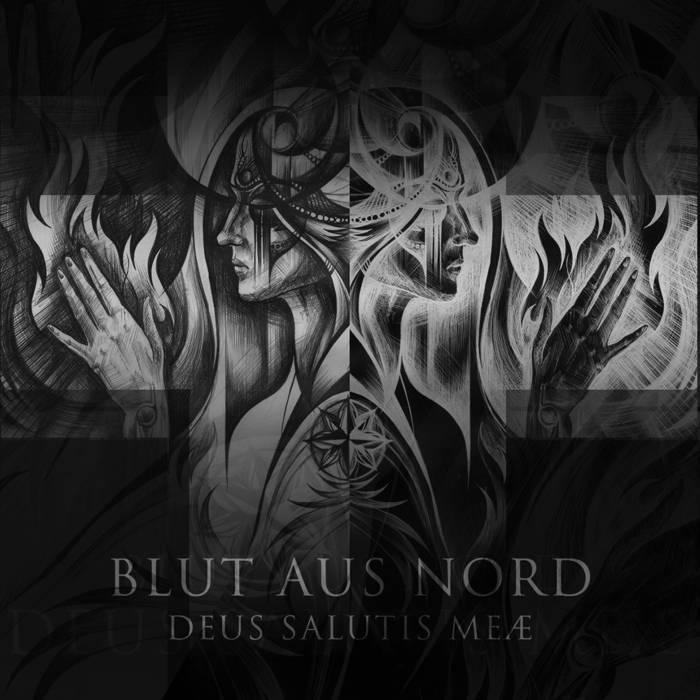 Perhaps it is that element of challenge that make Blut aus Nord so engaging: while I personally know very few fans, those that I do are always diehards that will defend founding member Vindsval’s musical vision to the ends of the earth. Uneasy listening or not, Blut aus Nord’s gorgeous walls of dissonant sound are a transformative, ritualistic experience like no other. And this latest release, Deus Salutis Meae, is no exception: mechanized, industrial rhythms pound churning, jarring melodies into your skull, mercilessly transporting you to a hellish altered state – see ‘Impius’ for a textbook example. Factor in vocals that run the gamut from distorted, semi-human snarls to whispered chants and cyborg shrieks, and it is no wonder that this remained a solo project for so long. A singular vision like this isn’t designed to be a comfortable refuge for anything more than a short sojourn, unless you are the one experiencing the catharsis that purging these demons must bring.

This quasi-religious analogy becomes apt as the song titles are examined closer: from the opening track, ‘δημιουργός’ (or ‘Demiurge’), which deals with the creator of the material universe – a malevolent entity in Gnostic texts that distracts the spirit from non-material concerns – right through ‘Apostasis’, ‘Relevatio’ and ‘ἡσυχασμός’ (or ‘Hesychasm’ [2], a form of orthodox meditation) the ritual atmosphere the music instils becomes entirely appropriate. The band photographs accompanying the album (see below) also speak volumes of the peculiar relationship the band holds with religious structures: like the gnostic Demiurge mentioned before, Blut aus Nord are an antagonistic presence, a thorn in some god’s eye that paradoxically draws attention from the spiritual while still acknowledging it.

Looking past this deeply conceptual developmental information, the end result is really what is under review: the signature fretless guitars [3] still supply the droning atonality, but they aren’t the overriding factor in the sonic lineup: an excellent variety of vocals, powerful, if slightly mechanical drumming and a shift in focus from pure noise generation to some melodic content makes Deus Salutis Meae a very interesting black metal album. But it makes it even more of an interesting drone-meets-doom album: the pacing, progression and mood are all suited more to a blackened doom release than a straightforward black metal one. This in itself is nothing new for Blut aus Nord, though: the 777 trilogy of albums (2011-2012) was greeted with favourable comparisons with the likes of Portal. ‘Chorea Macchaboreum’ particularly emphasises this by way of its repetitive low-end riff underlying the whole arrangement.

While everything on Deus Salutis Meae follows a similar recipe in terms of structure and sound, the standout moment for me is ‘Ex Tenebrae Lucis’ – not for clever melodies or catchy hooks, but for the machine-like effects on the harsh vocals that recalls perfectly some of my absolute favourite industrial/EBM music of the 90s – Leæther Strip, The Electric Hellfire Club and the like. In the end, this association of the synthetic and mechanical overlaying such organic, almost improvisational compositions may be what has always made Blut aus Nord one of the most exciting artists in my regular playlists. It may not deliver the soothing balm of Summoning or the rock-n-roll energy of Immortal (two of my other black metal regulars) but the serrated blade to the eardrums that is Blut aus Nord is a pleasure, and Deus Salutis Meae does not disappoint in this regard. If I had to find any negative criticism, it would be the abrupt, unexpected end to ‘Métanoïa’ that closes the album traumatically, leaving a listener in semi-shock and craving more.

FOOTNOTES
1. If pressed, I would say that 2014’s Memoria Vetusta III: Saturnian Poetry is the most accessible recording by this artist. The more conventional guitar use and excellent drumming by Thorns make this the most ‘black metal’ album in guitarist/vocalist Vindsval’s discography.
2. Coincidentally, a very acceptable ambient black metal project named Hesychasm can be explored here.
3. Vindsval’s use of this instrument makes him one of a very small list of guitarists that favour it: historically, Pat Metheny, Frank Zappa, Adrian Belew and Steve Vai have all dabbled in fretless guitar work, while Matthew Bellamy of Muse currently uses one for live shows.