When The Body and Full of Hell collaborated on One Day You Will Ache Like I Ache the result was…expected. The marriage of The Body’s dissonance, noise and heaviness and Full of Hell’s caustic, grinding, noise-addled death was powerful and striking, bringing out the best of both bands while still pushing boundaries. Ascending a Mountain of Heavy Light is mystifying, though, even defying description much of the time. You may have had time to sink into it since its release, but I wonder how much has actually been digested. It’s an amalgamation of swirling horror, beauty and heaviness. Ascending a Mountain of Heavy Light might even be the most appropriate title for it because, like its content, it’s perplexing, rich and ethereal. 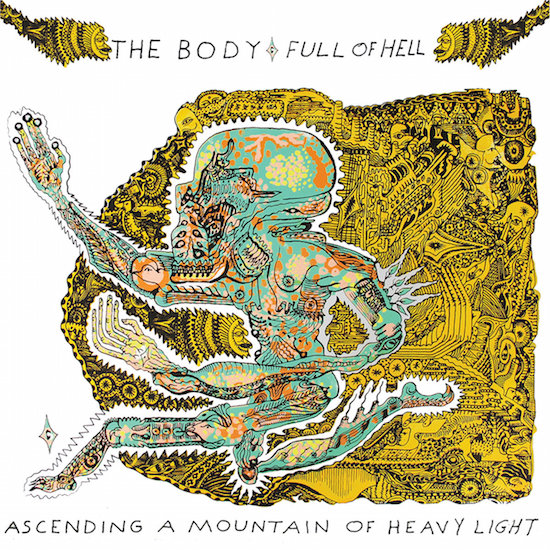 The Body and Full of Hell have cast aside most expectations for this one. It’s noisy at times, yeah, and it’s heavy much of the time. It’s even got some splashes of death metal here and there. But the album is an experiment in sounds. The opening track ‘Light Penetrates’ is nothing but aptly named. It’s like the album cracks open the skull and slowly lets itself seep in. It’s slow, plodding and still noisy. The saxophone at the end makes the song frantic and adds a layer of alarm to something that’s otherwise mostly heavy and warm.

That’s a perfect way to describe this album: warm. Ascending a Mountain of Heavy Light is bathed in warmth. Throughout things are rounded off and a brightness cast on what the bands have captured. Neither Full of Hell or The Body are any stranger to darkness, yet here they shed that skin and dance in something different. ‘The King Laid Bare’ is a wonderful example of this. Noise and electronic sections drench the song. And a heaviness begins to pick up as the track moves along. But it’s never the stark horror you’d expect with these bands.

But with the album being so different and experimental, you’d also think it’d abandon at least some aspects of the bands. I’d argue that this album is much more skewed towards the sound of The Body. Though the presence of Full of Hell can be felt, it’s never overtly so. Full of Hell’s Dylan Walker (vocals) can still get in your face but he’s never shredding his vocal chords in the process. Meanwhile The Body’s Chip King (vocals/guitars) sounds as distant as ever with his delivery, like he’s howling over the hills.

If you haven’t heard this yet and you’re wondering if the album ever gets fast and heavy, the answer is mostly no. And, frankly, that’s for the better. Flow-wise, the record is great, almost perfect. The tracks blend seamlessly and nothing feels out of place. Guest collaborator Brian Chippendale’s (Lightning Bolt) drumming picks up the pace at times but the album seldom comes to blasts. It hovers and drones more so than anything. The noise-riddled ‘Our Love Conducted the Shields Aloft’  and ‘Farewell, Man’ do some frantic stuff, but that’s about as close to grind/death as things ever get.

When all’s said and done, Ascending a Mountain of Heavy Light is a triumph in ways. If you don’t like this, I understand, I really do. As a fan of both bands, it’s eclectic and uncompromising; heavy, noisy and always shifting. It’s an album of many faces, and people that like electronic stuff are probably going to like this best. It’s an album that wears many masks at once, but manages to make it all work out.