There are some bands it’s easy to take for granted; the kind who will release an album every couple of years, go on tour at regular intervals, and be of such quality that it’s hard to think of them releasing something that’s out-and-out bad. Death metal stalwarts Cannibal Corpse are one such band. Now on album number 14, they have maintained their place as one of extreme metal’s biggest names for a long, long time; but it might not always have been so. After all, few bands change their vocalist and go on to continued success [1]; yet Cannibal Corpse can be counted among that number. The current version of the band, that arguably started with the release of Kill in 2006 following guitarist Rob Barrett returning to the fold, have cemented their place as one of death metal’s most reliably ferocious proponents of the old-school, and latest release Red Before Black does nothing to change that. It serves as a reminder of why “if it ain’t broke, don’t fix it” is such a truism; this is Cannibal Corpse doing what they do, with great – if slightly predictable – results.

Perhaps unusually, when Red Before Black is described as predictable, this is intended as a compliment. There are some bands – AC/DC, the Ramones, Motörhead – where you want the music to be exactly what you think it will be, where you don’t want the band to go all prog and venture off in to previously unexplored territories. So it is with Cannibal Corpse. You listen to one of their modern records because you want slick, well-produced, pulverising death metal, as crude and effective as a hammer to the face. Yet whilst there’s – in retrospect – subtle evolution between Motörhead’s self-titled debut and final album Bad Magic, so there is with Cannibal Corpse between first album Eaten Back To Life and now. The obsession with gore and violence is still there – as it, presumably, forever will be – but the shockingly grotesque perverse sexuality of early songs like ‘Orgasm Through Torture’ and ‘Fucked With A Knife’ is gone, replaced over time instead by pure rage – which is, for its simple-minded bloodiness, all the more effective. It’s been a long, long time since Cannibal Corpse needed to shock people to get attention [2], whether visually or lyrically; the music is all that matters. 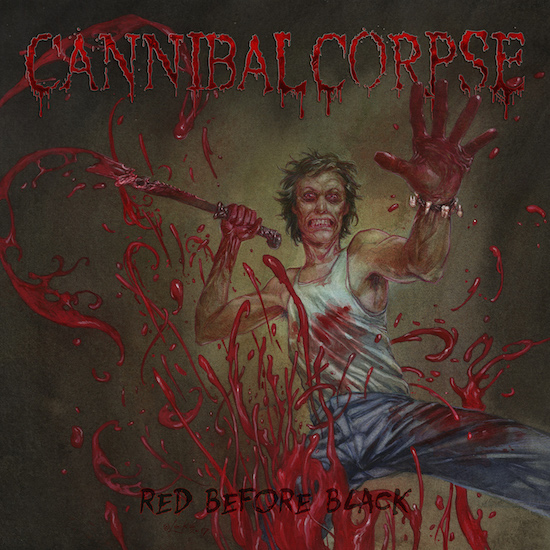 Of course, there has been a slight change here over time, too. Ever since Kill, the production on a Cannibal Corpse record has been much thicker and heavier, with every element of the band being lent an extra weight that, in retrospect, was sorely lacking from their output up until this point. Red Before Black continues with this, with death metal veteran Erik Rutan once more handling production duties, giving the album the heft and crushing sound it deserves. If anything, Cannibal Corpse have been getting even heavier over time (especially if you go back and compared their recent albums with Eaten Back To Life), consistently improving their craft by subtle increments. There’s no musical fat here, not a single note that could be further stripped back from the finely honed, muscular killing machine that is Red Before Black.

You’ll notice that I haven’t talked in any detail about the actual songs on Red Before Black thus far. That’s because they sound like you’d want and expect Cannibal Corpse to in 2017. They are, without exception, superb slices of old-school death metal, technically excellent yet with an immediate rush of energy and excitement, that demands an instinctive, almost primitive response. There are up-tempo ragers, such as the absolutely savage title track, that unleash their aggression in a berserk onslaught; ominous, slower moments that are as patient as a killer waiting in the shadows, such as large parts of ‘Remaimed’; and those which are more (relatively speaking) mid-tempo, moving with a confident belligerence that is deeply intimidating, as on ‘Scavenger Consuming Death’.

Yet, as great and strong as all of these tracks are – and make no mistake, they are all excellent – it’s hard to pick out something that makes them stand out when compared with songs on the last three records (Evisceration Plague, Torture or A Skeletal Domain). Whilst this may, at first, seem like a criticism, it is instead a testament to just how strong and consistent a band Cannibal Corpse are now. Given the strength and history of their discography, not to mention the emotional ties most fans will have to certain albums, it’s impossible to accurately say exactly where Red Before Black sits within its ranks – at least, not until another ten years or so have passed – but it’s certainly one of the better ones. Fans will be sure to enjoy this latest offering, given that it is, essentially, more of the same as what has been offered before – but when it’s this consistently strong and impressive, resulting in those same Pavlovian headbanging responses, that can only be a good thing; no one needs originality when the results are this good. Cannibal Corpse are absolute masters of their craft, and we shouldn’t take them for granted – they make producing death metal this impressive look easy, and extreme music will be a much poorer place once they are gone.

Footnotes:
[1] Current Six Feet Under frontman was the original vocalist for Cannibal Corpse, up until 1995, when George “Corpsegrinder” Fisher took over vocal duties. Whilst there are other metal bands who have continued to be successful after changing vocalists – most notably, Iron Maiden replacing Paul Di’Anno with Bruce Dickinson – there are plenty of others where changing vocalists has been less successful, including – but hardly limited to – Judas Priest, Sepultura, and Iron Maiden themselves when Dickinson left after Fear of the Dark.

[2] Though it is perhaps worth asking, what could a band who have written a song called ‘Necropedophile’ actually do that is still musically shocking by their own, and 2017’s, standards?