The Human Disease is the debut album from Belgian five-piece Cocyte, who had two EPs (Asylum, 2013 and New Breath, 2012) and a self-released demo preceding it. Compatriots Aborted have clearly influenced Cocyte in their writing, although whether they will go on to achieve international reputation in the death metal scene in a similar way remains to be seen. The feeling throughout the album is reminiscent of the golden era of the deathcore scene in the mid-2000s, where releases by Whitechapel (The Somatic Defilement, 2007) and Despised Icon (The Ills of Modern Man, 2007) in particular inspired hundreds of imitators. This imitation is not necessarily negative; listening to the album for a first time and having a familiarity with its sound draws me in – there’s a sense I’ve heard this before which makes for easier listening than the album’s inherent heaviness would suggest. The Human Disease takes the conventions and sounds of the deathcore scene and twists them in a way that to label Cocyte with that one genre would be unfair for the areas explored through the album.

There is a high degree of musical proficiency on display, yet this talent is applied inconsistently across the album. Positively in this regard, sections where a less cultured deathcore band may have fallen back on inserting another breakdown are often instead met with a mouth-watering dual guitar run from guitarists Jimmy Maes and Stephane Demonty. It is these sections where complex guitars are met by fast and tight drumming by Kevin Facella that set Cocyte apart from other bands happier to tread the centre ground of the deathcore genre. Where the band does not stray from the path is through their vocals – whilst Kevin Sanchez’s growls are competent, they are nothing more characteristic than that and do not stand out against Cocyte’s peers. 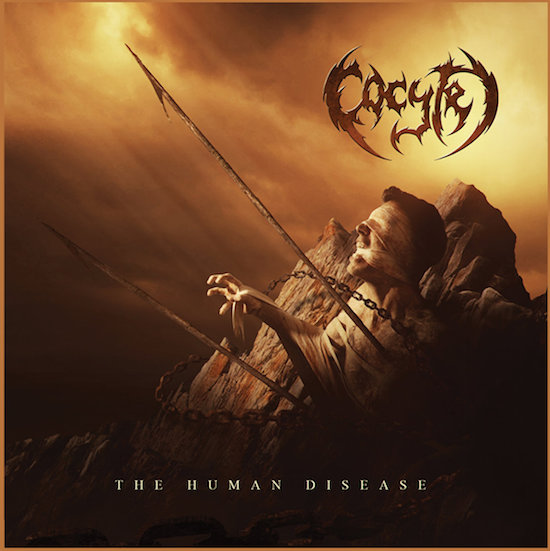 Less positively, and the key drawback with this album, is the flow both between and occasionally within each track. Tempo changes can feel clumsy and cause certain tracks (straight off the bat in ‘We Are Divided’ as the first song following the intro; ’Shadows & Illusions’ failing to find its rhythm for the entire song) to pass by without leaving much of an impression, and the moves between some tracks in particular is especially grating. Each song as a standalone would be around par among the group, however as a full album there is no over-arching experience. Performing live, Cocyte would no doubt find a receptive audience immersing themselves in the music’s aggression and the band’s technical prowess; as a recording, the polish on the production shines through yet the songwriting lets the band down – songs feel very much like they have been built from Guitar Pro rather than growing organically.

As a debut album, there is ambition and potential on display in The Human Disease, however for album number two there is certainly scope to harness this more effectively with more experienced songwriting and consideration for flow between tracks. In short; is this an album for repeat listening? Likely not, but a track or two (particularly the title track) could be comfortably included in a playlist among far more established bands in the genre.

N.B. This video is NSFW, contains an excessive amount of nudity.