In a genre where many fail to deliver anything new with each album, Decapitated have kept their hell-raising death metal refreshing for 21 years. Their early releases exuded a youthful energy that extreme metal had begun to lack at the time in the fallow early 2000s, and subsequent albums continued the band’s fierce drive for innovation and revolution, with riffs so full of frenzied spirit that the band proved vital in the resurgence of the extreme metal scene and inspired a generation of new artists. In recent years, Carnival Is Forever and Blood Mantra proved Decapitated still have more to offer than most, but seventh full-length Anticult takes things even further, overseeing their noticeable drift towards more groove-orientated textures despite remaining harsh enough to still land in the dominion of extreme metal. Channelling the likes of Pantera and Lamb of God, Anticult takes the band into a more accessible realm without sacrificing the bloodthirsty nature of the Polish maestros.

Many will short-change Anticult by passing it off as yet another good Decapitated album, but its mainstream appeal should not be ignored. In fact, comparisons to Machine Head’s The Blackening are warranted, given that one of the many regions in which Anticult excels is in its committal to raucous metal whilst retaining a penchant for irresistibly incendiary guitars, which when combined, give it a potentially world-conquering capability. The album’s eight tracks feature an overwhelming reliance on groove-laden riffs aided by Hubert Więcek’s prominent bass, with the band largely turning away from tech metal but retaining their signature crushing guitars, leading to a more composed variety of chaos. 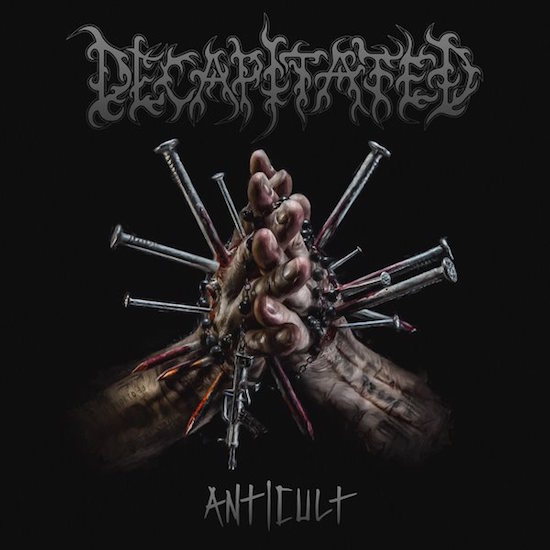 Anticult’s songs abandon standard death metal structure and are given the breathing room they need to twist and turn with staggering fluency, leading to tracks that so frequently add up to more than the sum of their parts. At times, these parts can happily drift into thrashy tempos or black metal intensities, whilst Wacław “Vogg” Kiełtyka’s guitars – when not supplying pulverising riffs or blistering solos – occasionally drift into melodious territory, giving each song a compelling atmospheric weight that allows Więcek and drummer Michał Łysejko to hammer home the metal in the meantime. ‘Deathvaluation’ holds the grooves of Pantera, ‘Earth Scar’ the bombastic noise of early Slipknot and ‘Kill The Cult’ the anthemic choruses of Machine Head, but an intense guitar tone and an endless onslaught of visceral riffs are constant reminders that only founding member Vogg could be behind them.

Decapitated Mark II, reformed by Vogg after the tragic and well-documented events of 2007, have more than lived up to the band’s legacy, and Anticult does nothing to reverse this trend. The reformed quartet’s third release marks not just another great album in a career lined with them, but a potential career-defining release so full of potent guitars and irresistible grooves that, if enough people hear it, it could stand the test of time as one of modern metal’s greatest milestones.