Entrails are a band who know exactly what they want to be. Initially active during the early 90’s but never recording anything, the Swedish death metal band were resurrected in 2008 by guitarist Jimmy Lundqvist, so that the old songs could finally see the light of day. Since then, the band have been staying true to the old-school Swedeath sound, but such is their talent and obvious passion for the music that it’s hard to hold their musically conservative tendencies against them. That’s the case on latest release World Inferno, a ten-track bulldozer of an album that demonstrates in no uncertain terms that there’s always something to be said for taking the fundamental sound and character of a sub-genre and absolutely nailing it.

As would be expected from any Swedeath album worthy of your time, World Inferno is absolutely crushing. The production gives the buzzsaw guitars of Lundqvist and Pontus Samuelsson a delightful weight and heaviness, whilst the vocals of Tommy Carlsson (who also handles bass duties) are powerful and passionate. Martin Mikaelsson’s drumming is tight, and though it’s rarely flashy, it keeps the songs moving forwards with irresistible momentum and strength. Lyrically, a quick glance at the song titles will tell you what World Inferno is all about; even if the themes of (un)death, war, and evil are hardly novel subjects for any metal album to cover, Entrails do so with such passion and enjoyment that it’s hard not to be swept along for the ride. 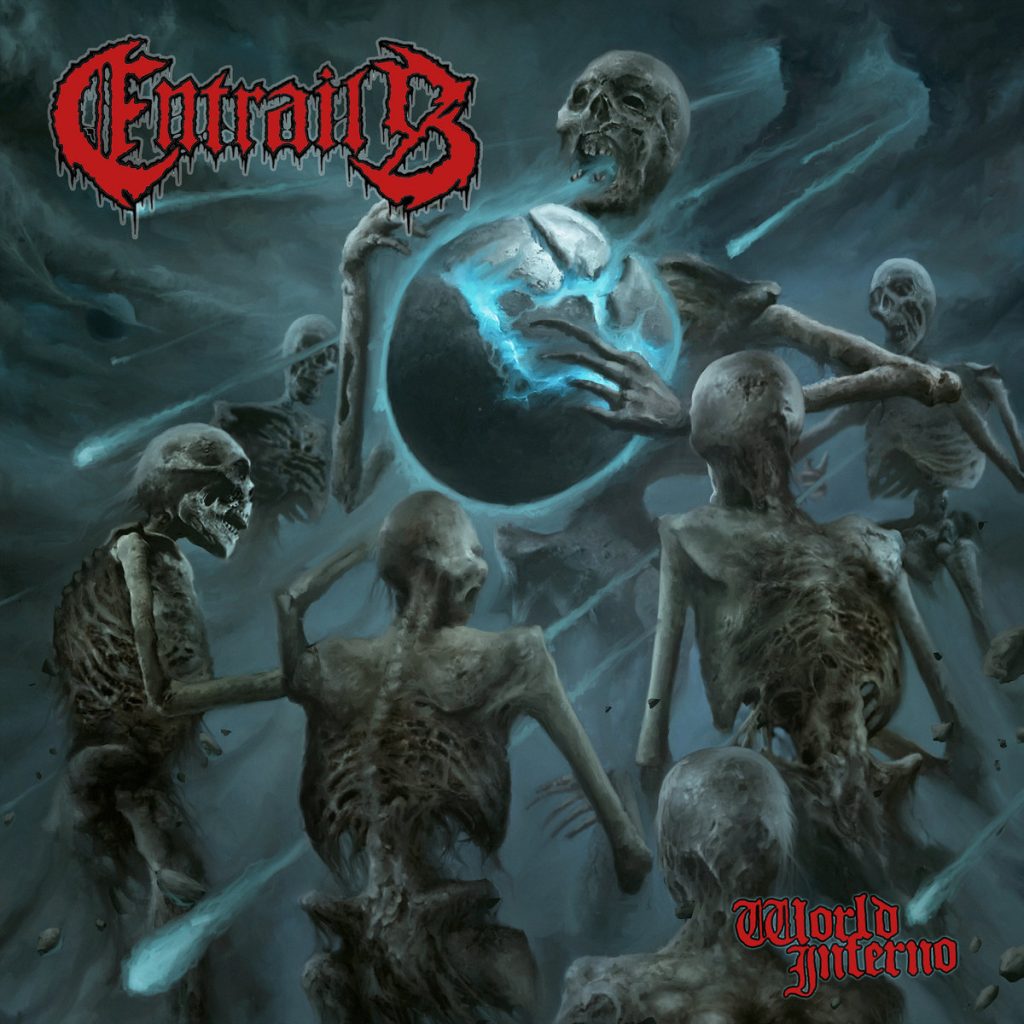 Whilst World Inferno is an album of consistent high quality, there are moments worthy of highlighting for praise. Penultimate track ‘The Hour Of The Casket’ features some excellent lead guitar work around the 2:20 mark that helps give the track an extra sense of drama and character; whilst second single ‘Serial Murder (Death Squad)’ is a restless, bludgeoning beast of a track with a chorus that is sure to have festival crowds shouting along.

The band’s resolute adherence to classic sounds and themes is both the strength and weakness of World Inferno, and of Entrails on the whole. There is no doubting that they capture the sound and spirit of early Swedeath (not a surprise, considering they were active at the time classics such as Entombed‘s Left Hand Path were being recorded), albeit with a slightly updated production; but nor do they add anything to the formula. To be fair to Entrails, nor do they seem to desire to do so, and instead they come across as a band who are perfectly happy writing, recording, and playing old-school Swedeath – but if the style has never really grabbed you before, it’s unlikely that World Inferno will change your mind. Instead, it feels very much like an album for the purists, and those who have spent so long with the classics of the genre that even the slightest change is revolutionary. Ultimately, World Inferno is a record that feels instantly familiar, in both good and bad ways – it may not offer much new, but it’s very hard not to be won over by what’s on offer.