Trending
You are at:Home»Reviews»Metal»Funeralglade – May the Funeral Begin EP
By Hera Vidal on November 23, 2017 Metal, Reviews

2017 has been the year of EPs for me. The brilliance of EPs is that you can showcase a lot of music and ideas in a short amount of time, which means that you have to choose songs that will reflect the melting pot of ideas that you want to pursue. However, because of the duration, it’s difficult to choose music that is both interesting and compelling for the listener to like, especially when you are a new band in the scene. This is the case with Funeralglade, who, although sound like pros, are a relatively young band. [1]

May the Funeral Begin ends and begins with death, setting up a solid ground for their future endeavors in the span of 24 minutes. Given the small runtime, it isn’t possible for the band to cover a lot of ground, but they do it and they do it excellently. The EP also has an atmosphere that borders on sinister, making the music come alive and sound a lot harsher than I expected. For music that has been labeled as ‘melodic death metal’, they have decided to focus on the heavier aspects of death metal – especially in the vocals – and have left the melodic parts to the synths and part of the rhythm section. The end result is music that sounds gritty, heavy, and crushing, while having melodic parts that balance out the harshness of the music and the vocals. 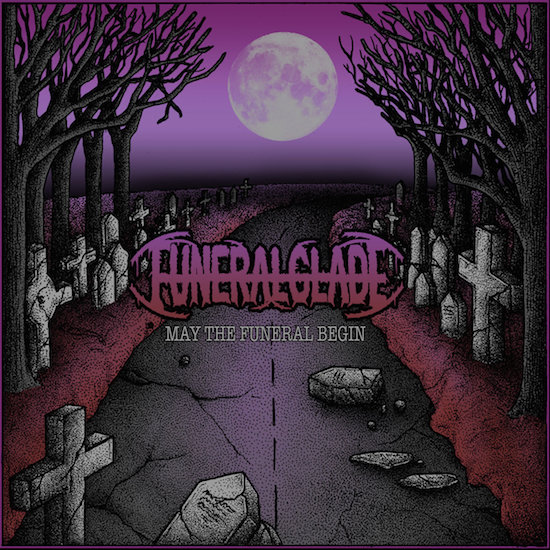 Now, there are some things that could do some work. While the production is of good quality, and the musicians clearly know what they are doing, there is a slight resemblance to Children of Bodom. Although it isn’t illegal to take cues from other bands, there is a difference between hero worship and plagiarism. There are times where the music tends to “borrow” from Bodom’s synth section, but they still have enough of a personality to not fully go that route. It might be beneficial to have a resemblance to a well-known band, but sounding too close to them doesn’t make a good first impression, especially when you are trying to stand out in a country whose metal bands per capita exceeds expectations. [2]

All in all, May the Funeral Begin is a highly polished EP, where the ideas of death, gloom, and high tension come alive in a short amount of time. It’s a decent first effort for a band barely setting its roots. There are many different directions the band can go, and I would not be surprised to see them expand their interests into other subjects. Given the abundance of Finnish metal bands, Funeralglade are already in great company while also having room for improvement.