‘Erection in the House of God’ kicks off the EP in incredible style. In typical doom fashion, the track is slow and chugging, but it does lack the progression of other doom bands – it starts as it means to go on. There’s also an awesome guitar solo towards the end from Decanus Obscaenus. Indeed, to finish off their sound, themes and look, Fvneral Fvkk’s band members have adorned themselves with crude sounding Latin names that are like sinister Carry On character names. You have Vicarius Vespillo on the bass, Frater Flagellum on the drums, the aforementioned Decanus Obscaenus and Cantor Cinaedicus provides the haunting, sacrilegious vocals. 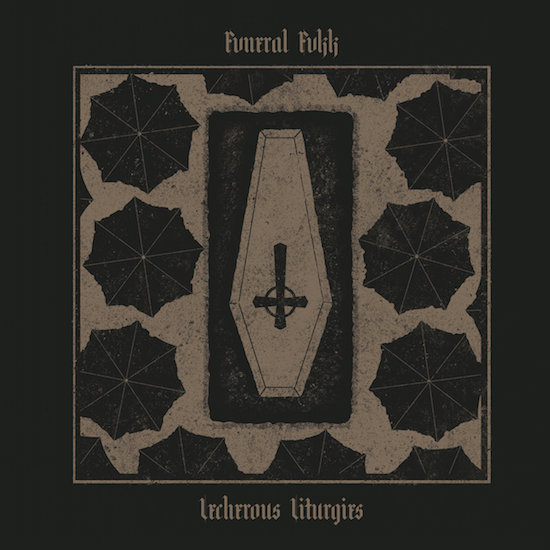 You could take offence to the lyrics if religiously inclined, and it’s clear that they come from a place of distrust in the church after such atrocious and unholy acts like what has taken place between preachers and children. This is a topic that has made it’s way into other bands’ writing, too. Disarmonia Mundi, for example, tackled it in ‘Same Old Nails for a New Messiah’. Lyrical themes of necrophilia, rape and debauchery from inside the holy walls of a church might understandably be taken as ludicrously offensive by more than a few. You can delete this paragraph if you want. Don’t know if it’s the kind of thing you’re after.

Cantor Cinaedicus’ lyrics are delivered in a deep tone, with a drone to them that wouldn’t sound out of place in a church. He’s delivering a sermon all right, but one of rape, necrophilia and debauchery. A look at the lyrics, however, and you’d might just find their somewhat dark humour funny, unless easily offended. What follows are the entire lyrics of ‘Underneath the Phelonion’:

“I am your lord, the holy one
Here in God’s name, His earthborn son
It is His will for you to kneel
My rod and staff shall comfort thee

I make you crave my raging spear
My burning loins demand your tears
Thus is your fate, to be my slave
To be the wench for the conclave

You shall be mine, by law sublime, soon it is time

Unlock your door
You filthy whore
On the holy floor.”

You can see why people could be offended by lyrics such as these, but it does appear that they were written with tongue firmly in cheek. Despite this, however, the music is about as serious as you can get – this is no joke band. The Lecherous Liturgies gives the goods of excellently written and performed doom. ‘Underneath the Phelonion’ starts quietly, but this time, it does build. At just under six minutes, it’s the shortest track on the EP, but also the finest. It features a cracking riff that builds alongside the vocals, gaining heft as the track develops until eventually resulting in a climax. The sexual undertones here are entirely intentional and fit alongside the lyrics like a glove.

The last track of this EP, ‘Fvkking at Fvnerals’, is more mellow than what immediately precedes it. The central riff is slower, more chugging and the vocals are deeper, with a slight echo to them. The production is magnificent here, the best in an EP that’s exceptionally well-recorded and mixed. There’s more of a darkness and foreboding to ‘Fvkking at Fvnerals’ than there is in the rest of the EP, its slower pace helping no end in this regard. It finishes the record off well with its heavy, chugging riff and foreboding atmosphere. It’s just a shame that there isn’t more on the EP. You’ll be loving it and then it just stops, sixteen minutes later. You’ll be left wanting more, so Fvneral Fvkk better not sit back and release their first full-length record sooner rather than later.

Whilst the lyrical themes and name of the band may put plenty of people off, Fvneral Fvkk’s debut EP showcases an exciting new name in the oversaturated world of doom. The Lecherous Liturgies is dark, foreboding and heavy stuff. You may find the lyrical themes vulgar, but most would probably just find them humorous. The Lecherous Liturgies certainly succeeds in what the band set out to achieve.

Footnotes:
1. Taken from their Bandcamp page.