Only two things are certain in life: death; and bands writing songs about death. Such bleak subject matter doesn’t readily lend itself to an enjoyable, fun listen, especially when it’s paired up with images of atomic devastation and extinction. Yet, Grave Pleasures are that rare band, who see in Death’s rictus grin not just a dark inevitability, but an opportunity to have some fun in the time given to us before the reaper takes his toll. Debut album Dreamcrash picked up from where the ashes of Climax – the sole album of Beastmilk, the band from whom Grave Pleasures draw much of their DNA [1] – left off, combining post-punk with a real ear for writing the kind of hooks that would stay in your head long after the record had finished, all topped off by vocals that ooze charisma and sex; and now Motherblood follows, improving upon the already great Dreamcrash to deliver ten songs that will have us dancing to the grave. 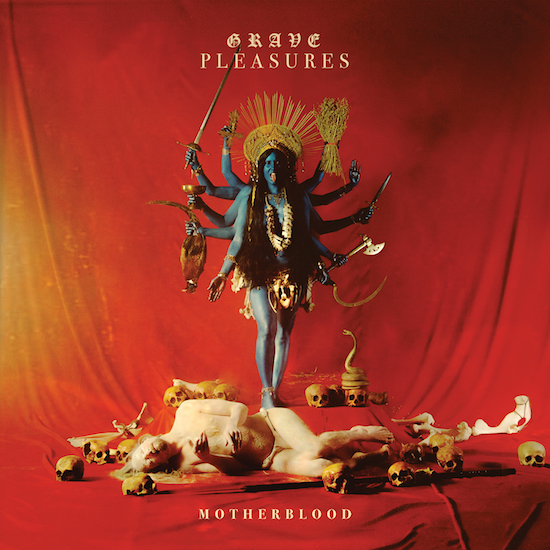 Every song on Motherblood feels streamlined, with only ‘Atomic Christ’ clocking in at over four minutes. The pop hooks evident on both Dreamcrash and Climax are even stronger here, with almost every song feeling as if it could take pride of place on a mix-tape specially curated for late-night cruising, or playing over the speakers in some smoke-filled underground bar, where strangers with dyed black hair and leather jackets cast longing glances at one another. As this implies, there’s a lot of darkness at play too, with plenty of gothic post-punk darkness that draws upon nihility and our deepest fears – nuclear war, a futile death, a life of loneliness – and combines these aspects with the aforementioned pop hooks to result in an album that is bristling with cathartic energy, dancing and making love even as the atom bombs fall. Atop it all are the vocals of “Kvohst” McNerney, who has a truly tremendous voice; whether it be crooning lustfully, or intoning darkly humorous statements about the end of the world, his vocals are a constant highlight.

Whilst previous records were notable for how good their strongest tracks were, Motherblood is a much more consistent album, in terms of engaging the listener and the quality of each song. Dreamcrash was an album that could be wildly inconsistent – whilst its highlights, such as ‘Howling Wolves’ and ‘Crisis’ were exceptional, other tracks such as ‘Worn Threads’ couldn’t live up to the standards set. That’s not a problem on Motherblood, where instead it is much, much harder to pick out individual tracks as highlights. ‘Be My Hiroshima’ could reasonably argued to be one, with the way it builds up tension to the soaring choruses; as could ‘Falling For An Atom Bomb’, with its barely restrained lust and strong bass lines. But then, so could the apocalyptic ‘Doomsday Rainbows’ (the song on which that Beastmilk DNA is most evident); or the nihilistically gleeful ‘Joy Through Death’, which features the kind of emotive guitar lines which The Cure used to great effect at their dark best; or practically any song on the album. The only exception to this is ‘Atomic Christ’, the longest, slowest track on the album, which opens with a moribund spoken word segment that gets the song off to a flat-footed start from which it takes several minutes to recover. It’s not a bad song, by any means, but it’s the low point on an album that is otherwise exceptional. It’s also notable that this is the only slow song on the album; whilst Dreamcrash‘s strongest moments were its slower, more reflective and sorrowful ones, Motherblood is a record that is determined to have a good time, especially as there won’t be a “morning after” to worry about.

Frankly, with songs this good, catchy, and accessible (no inherently bad thing, despite what the more-kvlt-than-thou types might claim), there’s little reason why Grave Pleasures couldn’t reach stadium-filling heights. They have the songs, and they have the charisma; all they need is the right exposure. Their subject matter may preclude it (songs about sex and love are one thing, but I doubt mainstream radio would delight in songs that use nuclear war as a metaphor for lust in the same way underground scenes do), but it wouldn’t surprise me to one day see Grave Pleasures headlining stadiums around the world. Motherblood is an exceptional record from an exceptional band.

Footnotes:
[1] Grave Pleasures came to be following tensions between Beastmilk band members leaving Mat “Kvohst” McNerney and Valtteri Arino as the only original members. They chose a new band name to reflect this change, though Grave Pleasures have played Beastmilk songs live.