Throughout the years, The Haunted have earned countless fans thanks to their heavy, raw and aggressive sound. If there’s one thing that has divided fans over the years, however, it is the lineup. Peter Dolving and Marco Aro have provided vocals on separate occasions and no one seems able to make up their mind over who’s the stronger performer of the two. With Strength in Numbers, Marco Aro once again steps up to the mantle, for the fourth time in the band’s history.

Strength in Numbers feels a little tame in comparison to the band’s earlier material; not lighter in any way, but not quite as energetic or raw. This is an accomplished record that doesn’t push the boat out too far for the metal veterans. There’s little in the way of experimentation here, nor the atmospherics that were found in tracks such as ‘Burnt to a Shell’ in 2004’s rEVOLVEr. There are moments of brilliance to be found, however. ‘Preachers of Death’ is full of awesome riffs, a catchy chorus and powerful atmosphere. It’s a very well written track that flows expertly right into the next song, ‘Strength in Numbers’. 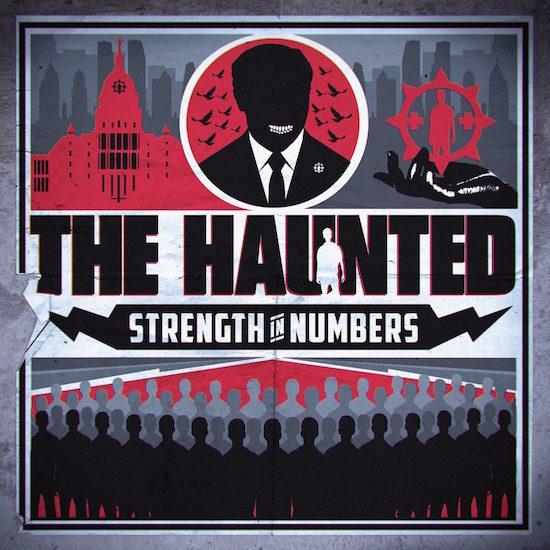 Indeed, there’s a new tautness to the band’s sound that may prove off-putting to some. But what it lacks in raw aggression, it makes up for in its flow and overall feel. Never before have I heard a record from The Haunted that sounds as coherent or accomplished in design. The album’s relatively short length of just under 40 minutes helps here. No song lasts longer than five minutes, allowing each track to flow seamlessly into the next. This is excellently done throughout, even with the differences from song to song. ‘Tighten the Noose’ is a rollicking thrash piece that doesn’t let up for a second, but it builds superbly from the slower, heavier ‘Strength in Numbers’.

The issue is, fans of The Haunted know the band for their raw sound and deep aggression rooted in angry, but fun lyrics. There’s nothing quite like the raw anger of ‘Trend Killer’ here. Tracks such as ‘Brute Force’, ‘The Fall’ and ‘Means to an End’ are full of anger (‘Means to an End’ in particular), but none of it presents the often expletive-laden lyrics that fans have come to know and love from the band.

The Haunted’s ninth studio album is heavy, fun and flows excellently, but it won’t scratch the itch for the offensive barnstorming metal of the band’s past. Overall, I’d argue that it is a stronger offering than 2014’s Exit Wounds, but Strength in Numbers is too well made for its own good at times. The raw energy of previous efforts from The Haunted hasn’t been captured in any great capacity, and the anger from the band’s past is lessened here.