Trending
You are at:Home»Reviews»Hardcore»Helpless – Debt
By Angel on August 29, 2017 Hardcore, Reviews

Every so often, you sit back and look at the state of the world – currently resembling two steps away from a flaming wrecking ball winging its way round the sun – and feel like there is nothing you can do about it. You have no power to stop the inevitable destruction of both the human race and its habitat. Now people can react in one of two ways; either, they sit in a slump, having given up all hope, or they get angry. Helpless, a new band out of the UK on a melting-pot hardcore tip, are exceptionally pissed on their début full-length Debt.

‘Worth’ starts out confrontational, dissonant, raging. The vocals are ceremoniously dumped on top of riffs which take touchpoints from Gaza, Botch and other bands that toed the line between math, filth and hardcore. The bass is exceptionally prominent, which works in their favor for a unique aspect in a sea of downtuned guitars muddying the bass. They also take it up a notch in speed on occasion – approaching Nails levels of vitriol – but they avoid relying on this as a songwriting crutch unlike many contemporaries. ‘Weightless Prayers’ is a great example where they switch gears from ‘punch-everything-around-you’ speed of burly hardcore and hit ‘monkey-on-cocaine’ speed of grind or powerviolence, and it works almost because of the shuddering halt the song comes to when the crust-riddled breakdown connects. ‘Sertraline’ pulls a similar trick just before it, almost as a first time practice before ‘Weightless Prayers’ and ‘Sinkhole’ blast and punch into oblivion. 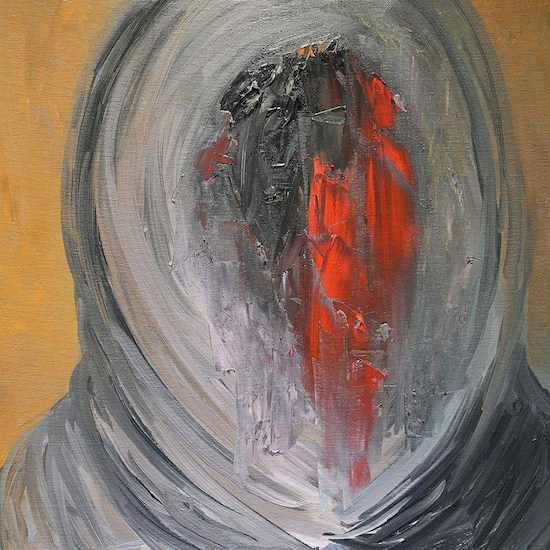 Meanwhile, the last quarter of the 21-minute record is reserved for the ear cleanser, the stomping ‘Denied Sale’ – Helpless stretch their legs out and work the noise rock flavor (with touches of Trap Them) which only tainted the songs that came before. The song rides the scrapes and screeches from the guitar from time to time, while the drums pound out a martial beat and the bass holds down a steady punching rhythm that keeps the song grounded. That it is the most interesting song on Debt is not a slight on the barreling chaos that precedes it, yet breaking from the formula so successfully shows a band who have really learned lessons of their self-titled EP in diversifying their sound away from chaotic hardcore.

Coming back to those vocals, they involve a range of caustic shrieks and growls from a gravel pit – but are strangely catchy at times. Credit is sketchy so it is unclear whether there are multiple voices or one versatile throat, but in any case the general consensus is they are angry. Their lyrics direct their vehemence at society with a nihilistic apathy; to quote from ‘Ceremony of Innocence’, “Sell-sell-sell-sell-sell-self respect/Existence is an exercise in passionless exertion.” It may be a well-trodden path but unless things get better, bands have every right to bellow about the dilapidated state of society and humanity’s propensity for apathy and self-destruction in equal measure.

If there is a criticism to be leveled at Debt, it’s a strange one – the record feels oddly restrained for the amount of unbridled aggression that Helpless have poured into it. It’s a downside of branching their sound away from a linear approach – ‘Moral Bankruptcy’ and ‘Manufactured Consent’ spring to mind as examples where Helpless could be going full tilt, but they pull back for some unbeknownst reason. Taking their foot off the gas pedal is not a slight at all – a record with this amount of negativity and filth in its nature would be exhausting to listen to if they went full-throttle – but it is a trait worth considering for future releases.

A lot of focus is made in music reviewing of punishing the listener’s ears or causing bodily harm from a listening experience – in this case it is unclear whether the band are punishing the listener or themselves for the state of the world. Regardless, Debt is a manifestation of the band’s own feelings, and anyone who feels the same way – or who appreciates the amalgamation of genres Helpless purvey – needs to spin this record. Maybe the energy contained in this album will inspire people not to feel so helpless, so we can retrace our steps and avoid creating a flaming wrecking ball winging its way round the sun.