Making good death metal is hard; standing out among the infinite number of bands out there nowadays (even on Bandcamp alone) is even harder – but Hereza are up for the challenge. Formed in 2014, the Croatian duo Slobodan Stupar and Ivan Kovacevic came together after playing in other death metal acts such as Defiant and the now defunct Bloodlust. Only a year after forming, they skipped the usual demo and EP ladder and went straight to releasing their abrasive full-length Misanthrope. With Godz ov War Productions, they have dropped their second full-length, I Become Death, a hard-hitting testament to their uniqueness in the current scene.

The album begins with the infamous and titular quote from J. Robert Oppenheimer (“Now I am become Death, the destroyer of worlds”), leading into the album’s longest track. Setting the mood for the next half hour, ‘I Become Death’ comes in hard and fast with death metal blast beats and documentary audio clips about the atomic bomb, before heading into ‘Jebem Vas u Usta ‘ladna’. Having the classic buzz saw sound design (à la Entombed) and some groovy riffs, the Swedish death metal influence becomes more apparent as the album progresses. ‘In the Name of God’ is the shortest track, unforgiving in its brevity with barrages of blast beats that only lets up for a short solo. The epic track ‘Tombcrawler’ slows things down a bit with echoing low guitars before bringing the album to a groovy and headbang-worthy conclusion. 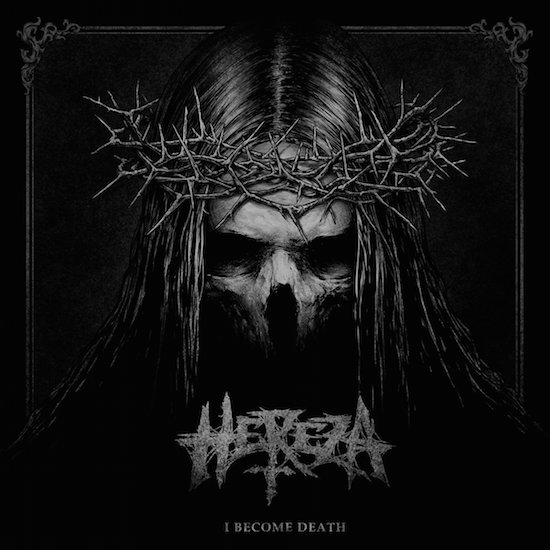 I Become Death won’t disappoint death metal fans on a lyrical front either. The cover art by artist Maciej Kamuda gives a great summation of what this album is about: death and blasphemy. In addition to the opening track dealing exclusively with the atomic bomb (“Through my veins pumping radioactive blood…Cancerous breath the ultimate death machine”), lyrics by Slobodan and Ivan range from personal murder to mass extermination. Breaking the mold, songs such as ‘In the Name of God’ and ‘Neplodna jama’ (‘Barren Ditch’) have lyrics of anti-religion and misanthropy (“The greedy ones must be suffocated in feces/Throw them in the pits of cum”), while ‘Tombcrawler’ is about a demoness luring men to the deaths.

Hereza is a vicious mix of old school and Swedish-styled death metal. The band has the aggression and classic fixation on death of the former and the buzzsaw sound and melodic elements of the latter. However, aside from the more melodic riffs of ‘Full Moon Slaughter’ and short but sweet solos, the technical aspect of death metal is not too prominent (and not to the record’s detriment). In short, I Become Death gives death metal fans what they want, while still mixing things up and using the best traits of both subgenres, making Hereza a unique force to be reckoned with.