“I pledge allegiance to the burning flag of the United States of Horror”- a child’s voice states at the beginning of Ho99o9’s début album. It’s a grand declaration, yet the sound snippet aptly directs the ensuing lyrical and musical content; brash hip hop meets anti-authoritarian hardcore punk and dense industrial experimentalism. The emcees theOGM and Eaddy grave-rob from countless subgenres to stitch together a monstrosity of crass proportions, fashioning an LP which mirrors their anarchic live shows. United States of Horror rears its ugly head to make a pertinent announcement of the internal and external sentiments of the current state of the USA, though Ho99o9’s nihilism offers no resolve; instead the New Jersey two-piece revel in goofy yet entertaining unruliness for the entirety of the record.

Ho99o9 create sonic Molotovs of sound through thick, multi-layered production and rapped vocals which border on coarse yelps. Their music lends to a diverse array of influences, ranging from the morbidly raw hip hop of Gravediggaz, the industrial drive of Ministry and the groove-ridden crossover thrash of Suicidal Tendencies. Furthermore, individual moments of reverence appear when Ho9909 imitate Slayer’s atonal instrumentals and breakneck pace on ‘New Jersey Devil’ and anthemic 80s hardcore on ‘City Rejects’ to accomplished outcomes. Juxtaposed to the prior mentioned genres, the sounds of contemporary hip hop surface throughout United States of Horror; bass-boosted trap rap and sci-fi soundscapes feature in ‘Splash’, while doomy piano loops and exceptional rapping performances define ‘Moneymachine’. The most thematically interesting track is ‘Hydrolics’, where Eaddy and theOGM deviate from the anti-capitalist themes of the album to concentrate on expensive auto-mobiles, ultimately begging the question of whether it’s an ironic lampoon of hip hop braggadocio or a sincere desire to participate in the gangster lifestyle. 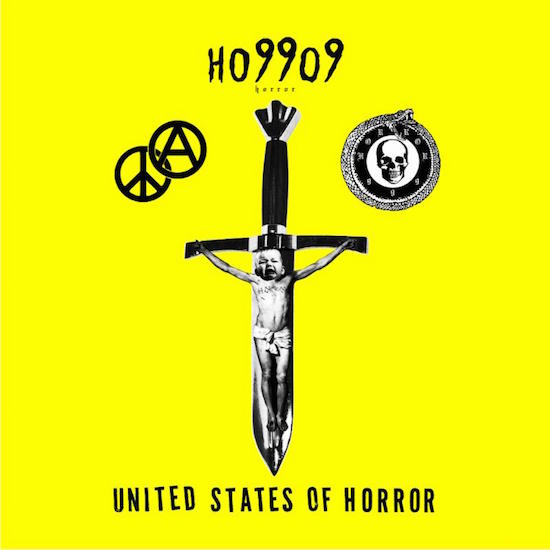 The two prominent styles of hip hop and punk are frequently paired admirably and often fragment into brief sections of either genre. ‘Street Power’ offers crossover thrash followed by the suspenseful ambience of ghostly hip hop sections; a welcome respite from the overwhelming aggression. Similarly, ‘Knuckle Up’ utilises distorted spoken word style rapping that lead into a commanding screeched section where the MCs sound equivalent to Saul Williams at his most hostile. It simmers down, the rapping increases in pace and accordingly allows the heaviness to return with increased vigour.

Whilst Ho99o9 offer semblances to other industrial hip hop acts such as Death Grips, clipping. and NAH, their music offers just enough originality by means of thrash-ier composition to diminish any accusations of veneration. Ho99o9 endure in a musical climate where aggressive sounds are flourishing in both underground and popular hip hop [1], and United States of Horror will sit comfortably alongside releases such as Death Grips’ Steroids (Crouching Tiger Hidden Gabber Megamix) and Show Me The Body’s CORPUS I, thanks to its relentlessly chaotic complexion. The record may require being a fan of both heavy music and hip hop, but Ho99o9’s resolve-free mutiny is forty-five minutes of incredibly entertaining cross-genre mutation.

Footnotes:
[1] Musicians such as xxxtenacation, Syringe, Bill $aber and Ski Mask the Slump God have begun to rise to mainstream prominence this year with a combination of aggressive rapping and lo-fi trap rap style beats. Denzel Curry’s new demos such as ‘Hate Government’ from his upcoming album Taboo have also hinted at this direction.