Trending
You are at:Home»Reviews»Metal»Incantation – Profane Nexus
By Stuart Wain on October 5, 2017 Metal, Reviews

It’s almost 30 years since Incantation first crawled out of the darkness, yet despite being one of the most influential bands in the death metal underground – with their head-spinning, otherworldly brand of death have clear influences on the likes of Dead Congregation, Teitanblood, and even Portal – they’ve never quite received the recognition some of their peers have. Whilst the likes of Autopsy, Cannibal Corpse, or Suffocation can be considered death metal staples – and for good reason – Incantation are often over-looked. The band don’t seem to mind, though – and if they do, there’s little sign of it showing on new album, Profane Nexus. This is latter-day Incantation doing exactly what they do, and whilst there might be a few more straight-forward riffs and moments than on previous efforts, this is still a difficult, mind-bending listen that requires patience and effort to get the most out of. 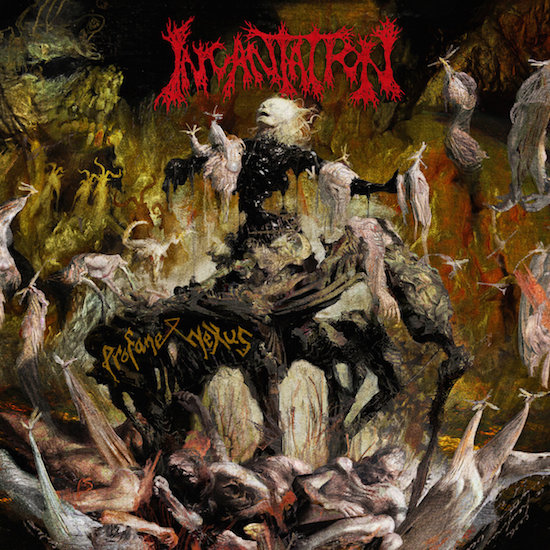 Incantation’s sound hasn’t radically changed since the release of landmark debut album Onward to Golgotha, and though recent albums have been slightly more accessible, with a few more nods to conventional song-structures than there were on early albums, they have still hardly been the sort of thing that will ever gain mainstream approval. The constantly shifting tempos, time signatures, and hints of discord (especially in the guitar leads) that have long characterised Incantation’s sound are all present and correct on Profane Nexus, and John McEntee’s vocals are as gutturally deep as they have been since he took over vocal duties in 2004. At times, the combination is physically uncomfortable to listen to, with so many different elements seeming to move in unpredictable, punishing ways; but stick with it, and some kind of structure and form becomes apparent. Much like Suffocation or Morbid Angel, Incantation’s sound is deeply technical, with superlative performances throughout from all involved, but what matters most is how they come together to create an atmosphere of oppression, dread, and death.

As that might imply, Profane Nexus is an album that is best appreciated as an album, rather than a collection of songs. There is a distinct flow and movement both to the songs and album as a whole, and the songs come together to be more than the sum of their parts. Not that there aren’t individual tracks which deserve highlighting; lead single ‘Rise of the Locust’ is as concise an example of Incantation’s power as you could ask for, whilst ‘Xipe Totec’ is a one-minute blast of thundering, pummelling death metal that is one of the most straight-forward songs Incantation have ever recorded. The following track ‘Les Sepulcri’ also has a very direct manner, with some of the riffs and movements even being reminiscent of Cannibal Corpse in terms of their no-nonsense viciousness and direct manner. Tracks such as these, doom-tempo closer ‘Ancients Arise’, and the dark ambient interlude ‘Stormgate Convulsions from the Thunderous Shores of Internal Realms Beyond the Grace of God’, help give the album some extra textures and hooks that might otherwise be lacking.

Beyond that though, Profane Nexus is largely a case of Incantation doing what Incantation do. Not that there’s anything inherently wrong with that – and it actually means the album sounds pretty bloody devastating for large parts, with a song-writing and technical competency that most other bands can only dream of – but it does mean there’s little here to really distinguish the album from the last few, when the slightly more accessible riffs and song-structures really began to become apparent in Incantation’s sound. Long-time fans are sure to enjoy it, but those who have never been able to get in to Incantation before will probably still be left wondering what the fuss is about.