As post-metal impulses continue to push the scene into new territories, science fiction seems to gradually becoming more of a source of inspiration. Take LLNN, for instance – featuring members from Psyke Project and Piss Vortex, they came onto the Danish metal scene in 2014 to make a mark with their eerie blend of hardcore, sludge, and synthesizers. Similarly, Los Angeles’ Wovoka is no stranger to panoramic soundscapes, having utilized ambiance to chilling effect on their LP Saros (see: ‘Prayer’ and ‘Eclipse’.) The two budding bands have joined together to release the split LP Traces/Marks through Pelagic Records.

‘The Guardian’ kicks off LLNN’s contribution, beginning with an otherworldly synth intro that leads into hardcore-inspired heaviness, punctuated by vocalist Christian’s shouting vocals. Although considered by some to be a sludge band, the influence is only particularly apparent on ‘Engineer of Ire’, a low and heavy track that ends in noise. Paired with lyrics of hatred and aggression, the coldness of their sound evokes the image of a vast and unforgiving cosmos. LLNN’s half is re-release of material from their EP Marks (which was also released on their split with Grim Van Doom) with the exception being the new track ‘Gravitated’, a spacey and John Carpenter-esque ambient track that ends the side with a sense of impending doom. 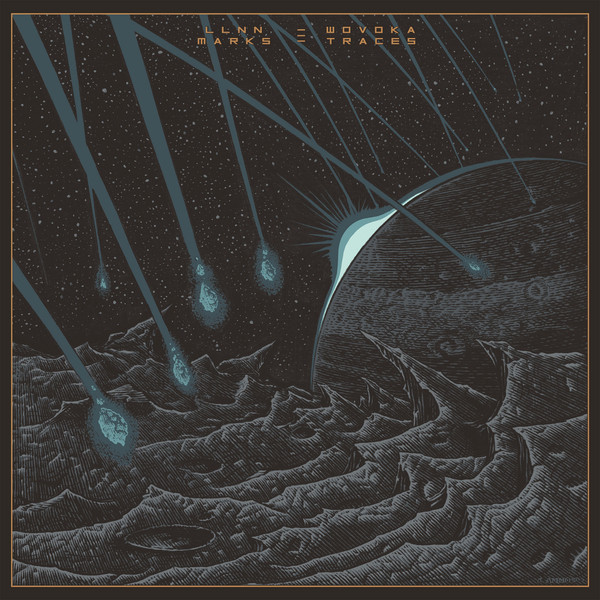 Wovoka provides the LP’s finale, a hefty 17 minute-and-a-half track that brings the split to a somber conclusion. Operating on a spectrum of moods, ‘Traces’ begins sludgy, slow and plodding, but gradually becomes more aggressive into the song’s second act. The band’s post-metal tendencies come into play as the track finishes with a relatively lighter tone and clean singing. ‘Traces’ deals with loss and the process of grief [1] and this is reflected in the song’s progression, evoking emotions ranging from sadness to anger and frustration, and then ending in a state of depression and sorrowful longing. The contrast in members’ Cody Schneiders’ and Eric Kniss’ vocals highlights the stages of mourning, and the changes in the music’s intensity follows suit.

Despite the outer space cover art by Belgian artist Ammo, the sci-fi aspect of the album lies mostly in the LP’s atmosphere. The electronic tones and ambiance serve as a unifying presence, tying the two sides together in an extra-terrestrial sonic fabric. But keeping ‘Traces’ minimalist in this regard, Wovoka uses a simple drone synth to establish its mood before getting the sludge going. While LLNN’s side is lacking in an abundance of new material, the haunting ‘Gravitated’ makes up for this and is an effective bridge for the split. Traces/Marks is a melancholy listening experience, merging the strengths of the two bands’ sounds to make an effectively expansive and moody split.