Trending
You are at:Home»Reviews»Metal»Loss – Horizonless
By Josh Lee on June 12, 2017 Metal, Reviews
Band: Loss
Album: Horizonless
Record label: Profound Lore
Release date: May 19th, 2017
Website & Facebook
Purchase/Download
Tracklisting:
1. The Joy of All Who Sorrow
2. I.O.
3. All Grows on Tears
4. Moved Beyond Murder
5. Naught
6. The End Steps Forth
7. Horizonless
8. Banishment
9. When Death Is All

‘Funeral doom metal’ is, as one would imagine, a style steeped in connotations of anguish, despair and hopelessness. Where traditional doom acts explored fantasy and the occult, creating dramatic portrayals of heretical acts, funeral doom has always turned inward, adopting lyrical topics of depression and isolation, often through a lens of overt pessimism. From its roots in the 1990s with bands like the UK’s Esoteric and Finland’s Skepticism, funeral doom continues to haunt the heavy metal zeitgeist, with contemporary acts cropping up everywhere from Belarus (bands like Oyhra and Zaklon) to America with Bell Witch, Lycus and today’s band in question, Loss. Drawing from the most prominent of funeral doom acts, Loss’ music features the very same gruff, death metal-like vocals and lumbering, mournful guitar passages pioneered on albums like Esoteric’s Subconscious Dissolution into the Continuum. With a style as distinct as funeral doom, one’s only concern would be a band becoming caught in the trappings of said sub-subgenre; though Horizonless is very much a continuation from the material that preceded it – while also falling into that same stylistic umbrella as other acts – there is more to Loss’ music than a mere genre tag.

Horizonless is not Loss’ first acclaimed record; they already established themselves on the gold standard of American metal labels, Profound Lore Records, with their debut album Despond in 2011, which showcased their prowess for creating menacing riffs and atmosphere, with moments of unexpected intimacy. It was here we saw the genesis of Loss’ all-consuming obsession with death, hopelessness and the want to cease existing; past material like ‘Cut Up, Depressed and Alone’ and ‘Open Veins to a Curtain Closed’ leave little to the imagination of the listener, making their overt allusions to suicide and mental anguish a centrepiece of their music. On Horizonless, Loss expand their discussions of death to that of wider contemplations on individual mortality, as well as a fatalistic view of the future. A line in the opening track, ‘The Joy of All Who Sorrow’, encapsulates the overarching theme of the album rather aptly; “A dark permanence, the literal worship of death, the nothingness of being.” 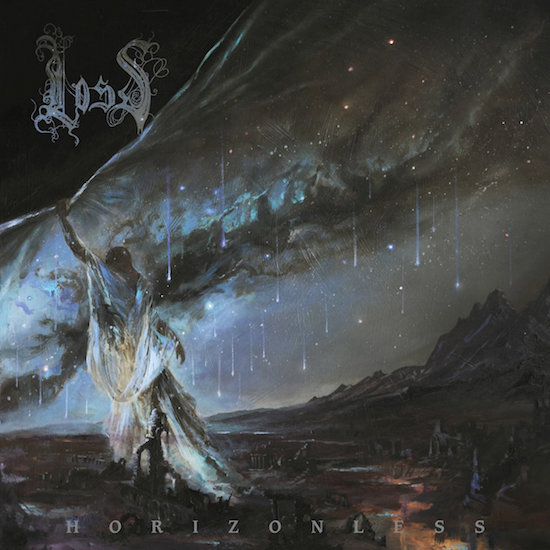 The tracks across Horizonless present themselves in these steady and progressive structures with a much-welcome dynamic edge, and the crisp production only further accentuating the lumbering and tightly-performed arrangements with meticulous levels of polish. It’s this very level of polish that grants the album, in some ways, an air of elegance and refinement. This is to say nothing of the vocal performances across Horizonless by vocalist Mike Meacham, often taking the form of the growls and snarls of Loss’ funeral doom predecessors, with moments of dramatic tension in certain songs transforming Meacham’s voice into chilling howls – a fitting vessel to Loss’ despondent musings on mortality. Meacham also utilises occasional spoken passages to break up the pacing of each track and provide greater clarity to the overall message of the album. The lyricism is often personal and introspective, at times Meacham expresses his desire to be swallowed up by the earth itself, or an acceptance of his melancholy – “I have come to know the joy of all who sorrow”. Moments on the title track, however, appear less personal, alluding to the destructive cycle of humankind with the repeated mantra “Something is lost, nothing is gained / The world is ours to share and stain”. In many ways Horizonless is not only a musical journey, but an emotional odyssey; it’s tastefully produced and dynamic, while evocative and poignant in the way it explores mortality.

Any glimmer of optimism or hope seeping through – such as the beautiful beginning passage of ‘All Grows on Tears’ – is quickly dashed, hidden away from the listener, as though the album itself were isolating itself. Nevertheless, the music of Horizonless is not merely wallowing in its self-pity, there’s an underlying desperation for it to be seen, to be optimistic; or at the very least, it despairs at its loss of hope. Simultaneously the album does not ask for pity; both ‘Naught’ and ‘The End Steps Forth’ begin with threatening introductory passages, as if rejecting any form of intimacy with the listener. It’s this conflicted emotionality that makes Horizonless a deeply invested listen. While it draws heavily from the conventions of funeral doom and Loss’ back catalogue, it’s this sense of introspection with which it explores its subject matter, and the absolute elegance in which it is executed, that makes it an album well worth one’s time.