Marginal has only been around since 2013, but this Belgium-based grindcore/crust quintet are musical veterans (ex- Suhrim, Jesus Martyr and others) and their experience shows. Third album Total Destruction displays their confidence with its simplicity and directness: this is remarkably stripped-back, organic aggression.

First track ‘Barbarians’ sets the tone for the whole album with brutal, satisfyingly simple guitar riffs and a neat song structure. The guitars on this album reference old-school 1980s grindcore, with Napalm Death and Extreme Noise Terror influences in clear evidence. There are strong thrash metal influences too, notably in ‘Impaled’ and ‘Total Destruction’, which most likely derive from guitarist Martin’s time in Argentinian thrash act Jesus Martyr. [1] There’s also some fantastic tremolo picking in ‘Delirium Tremens’ and ‘Total Destruction’ which add Slayer-like tension and dissonance. For the most part the pace is relentlessly fast, only slowing down for the doomy first half of ‘Rat Kebab’- great title for a grindcore ballad. 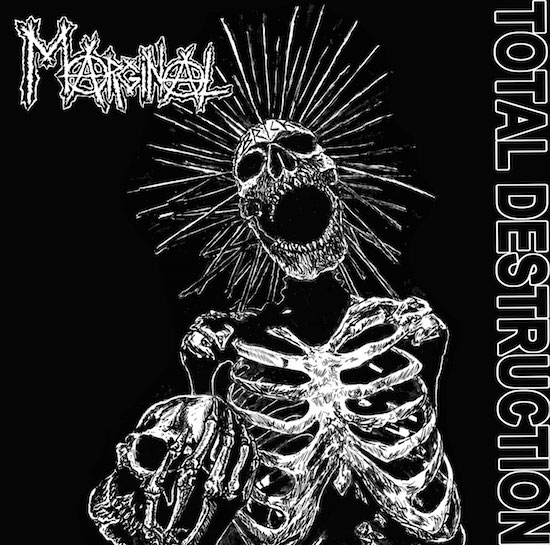 The drumming is a stand-out feature of the album, providing plenty of variety between d-beat and blast beats, with striking examples of manic drumming in ‘Delerium Tremens’ and ‘Leech Invader’. The drumming quality is even more impressive given that apparently the album was recorded in a single weekend with no drum editing, and the drummer didn’t know the songs beforehand. This is testament to the interpretative accomplishment of drummer Steven (ex-Aborted).

On the subject of production, although Marginal advertise themselves as crusty and raw, the mix is actually clearer than you might expect, and this works well. When the sound really fills out, for example in the second half of ‘The Violent Way’, the purer production allows you to appreciate all the different elements. Sonic effects are used extremely sparingly in this album, and I wonder if Marginal could have gone for more. For example I really liked the ghostly female voice that appeared in the choruses of ‘Impaled’, and the mid-register dissonant guitar sirens in the same song, as well as in ‘Ruination’. A few more ideas like this could take Marginal to the next level.

Lyrical themes are, as you might expect, societal problems, drugs and alcohol, modern politics and the threat of annihilation. The vocals are low in the mix and the far-away effect works, although I’d like to have a lyric sheet to discern more of the subject matter. In accordance with the album title, nuclear war is a particular focus, and given recent Trump-North Korea insanities this is perhaps not such a 1980s anachronism. The last two tracks are prefaced by recorded excerpts from Robert Oppenheimer’s famous ‘Destroyer of Worlds’ speech, [2] while the album ends with thirty seconds of the sound of a nuclear bomb exploding.

This album doesn’t break any new ground; in fact it harks back to the old days of UK grindcore pioneers, and wouldn’t have sounded out of place in the 1980s. There is a question as to whether it is a bit too simple. Given the obvious technical competence of the band, perhaps they could have been more innovative with the riffs, effects and song structures. However in that sense, Total Destruction does what it says on the tin. This album is a less challenging listen than the more experimental, dissonant grindcore out there, which perhaps allows it to communicate its raw aggression more effectively, and sometimes that’s exactly what you want. Marginal say of this album that “We aim to make a sonic fist in the face” and they have undoubtedly achieved that.