Being prone to pessimism and melancholia, it’s rare for something to slap a big, stupid grin on my face – but Norwegian solo project [1] Mork does exactly that. 2016’s Den Vandrende Skygge was a haunting and mournful selection and, while undeniably excellent, the 2017 follow-up, Eremittens Dal, discards any pretension at DSBM and dives straight into harsh, thrashy black metal with no frills, no fuss – and definitely no pulled punches.

It could be argued that the presence of impressive guest musicians – 1349’s Seidemann appears on bass, as well as Dimmu Borgir’s Silenoz on vocals – are the ingredient that’s been missing from Mork all this time [2], but there had to have been some spark already in place to attract heavy-hitters like these to add their expertise to an icy slab of retro black metal like this. Whatever the cause, the effect is obvious: ten punishing, raw tracks, not a one of which out of place among second-wave pioneers like Mayhem or Darkthrone. 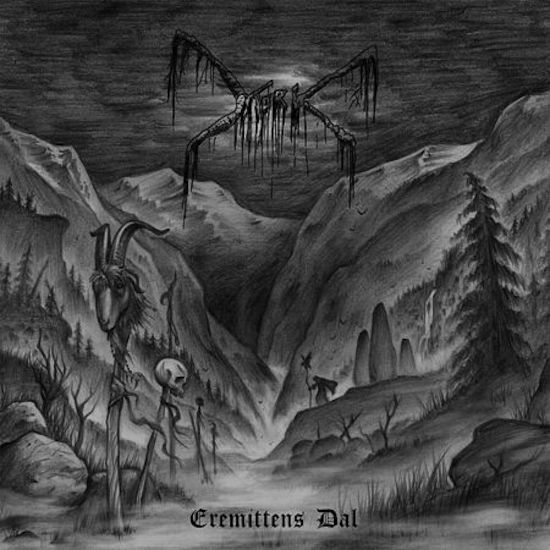 Despite this rough-and-ready methodology, don’t mistake Mork for simple music: at first glance, the style is all blasting drums and fast riffing but careful attention reveals subtleties (straight off the bat, short, but sensitive vibrato in between the jarring chords of the main theme of ‘Hedningens Spisse Brodder’) that elevate Eremittens Dal from initial impressions of raw, death-inspired black metal to carefully cultivated and far denser approach. Even the building waves and stabs of feedback in ‘Holdere Av Fortet’ or ‘Forsteinet I Hat’ seem controlled and modulated rather than a side effect of frenzied strumming. Factor in drumming that treads a tightrope between percussive sensory assault and gentle accompaniment (despite the intentionally tinny, reverb-rich tone in places) and you have some extremely clever music on your hands. The tone isn’t the only carefully crafted throwback to the 90s, though – even the cover artwork boasts the deft pencil work of Jannicke Wiese-Hansen, famed for early Burzum and Satyricon cover art.

I could find some aspect to wax lyrical about for each and every track on Eremittens Dal, but I will restrain myself and focus on the absolute highlights: the chilling groove and build of ‘I Hornenes Bilde’ [3]; the sheer misanthropic violence of ‘Forsteinet i Hat’; and the total change of pace, complete with folk-inspired melodies and spoken word vocals of ‘Et Rike i Nord’. Even if the rest of the album didn’t press all my buttons, these three tracks alone would make it worth owning. As it is, Eremittens Dal comes as close to being a perfect true Norwegian black metal album for me as any. There is nothing I would change, given its rock sensibilities, solid songwriting, fist-in-the-air hooks and dynamism throughout. Despite the general tone of the album being further along the death end of the spectrum than my usual tastes – more along the Tsjuder or Urgehal lines than my more avant-garde Kampfar or God Seed – this is an absolute gem. Where Immortal’s Seventh Date of Blashyrkh is always my first option for a live DVD, Mork’s Eremittens Dal is rapidly becoming my go-to album when I’m not sure what else to listen to: it turns my mood up to eleven every time. Now, if you’ll excuse me, I have a big, stupid, black metal grin to go and share with the world.

FOOTNOTES
1. A status which is no longer 100% valid – Mork has, with the release of Eremittens Dal, recruited live musicians to take his retro style of black metal on the road.
2. Although this isn’t the first time Mork has featured some impressive guest work – Darkthrone’s Nocturno Culto contributed vocals to the 2016 second album.
3. For which there is a live video.