It may have been five years since Municipal Waste’s last full-length, but it’s been just four months since band members Tony Foresta and Philip ‘Landphil’ Hall dropped their third LP with Iron Reagan, a side-project that shows little difference to Municipal Waste’s crossover thrash style. As such, whilst Iron Reagan lean more heavily into the hardcore side of the two band’s similar hardcore-meets-thrash metal style, the band aren’t entirely out of practise and, as expected, Slime And Punishment successfully sees the return of a band that could be argued as 21st-century thrash metal’s biggest name. Municipal Waste’s party thrash style has gifted the metal world six ferocious full-lengths, including 2007’s The Art Of Partying – considered a modern classic by many. Slime and Punishment does little to alter any notions that the band rarely experiment, but the light-hearted approach Municipal Waste adopt has never been one people would look to for the next game-changer. You know what you’re likely to get from the Richmond thrashers.

The album follows the band’s favouring of shorter song lengths; fourteen tracks narrowly miss a half-hour runtime. Foresta’s quick rasps have lost none of their venom, and the guitar-work of Ryan Waste and his Bat colleague Nick “Nikropolis” Poulos, Municipal Waste’s first new member since 2004, is as full of face-melting shredding as ever. The band’s commitment to exhilarating and raw metal is unchanged, and neither is their penchant for comical songwriting. Smirk-worthy song titles like ‘Shrednecks’ and the title-track itself are pure Municipal Waste, and the quintet even bring back the amusing spoken-word section – something they’ve been known for in the past – on ‘Parole Violators’. 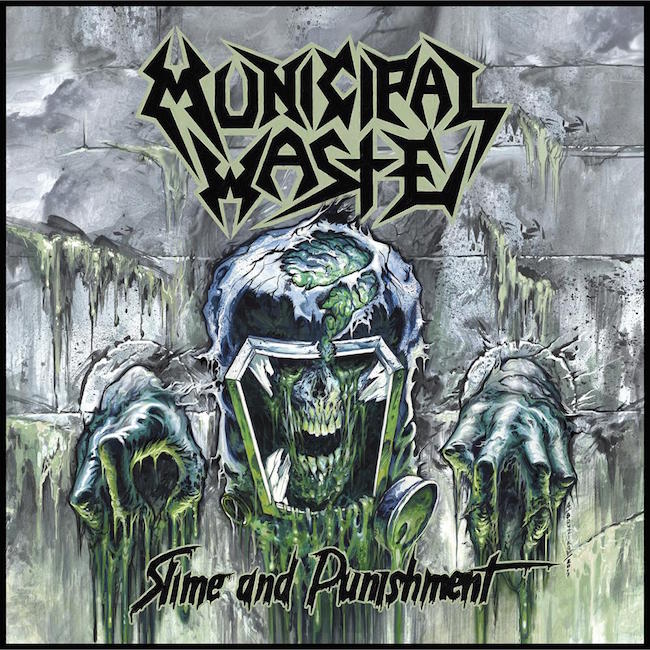 ‘Bourbon Discipline’ (most likely a pun of Biohazard’s Urban Discipline) is yet another track to display the band’s lack of seriousness, and is also one of many on the album that stands ready to induce full-scale mosh pits in a live setting. ‘Enjoy The Night’ shows the band’s speediest side both in terms of runtime and the velocity of the music – its harmonized guitars offer a catchy section that the band can now replicate live, thanks to Poulos. ‘Shrednecks’ offers respite in the infectious mid-tempo section, whilst ‘Death Proof’ manages to reach a whopping 2 minutes 52 seconds – the album’s longest – and closer ‘Think Fast’ ends the album on a high, showing off some of Hall’s most prominent and impressive bass-work, as well as more predictable but nevertheless satisfyingly unruly metal.

Slime and Punishment offers little more than you’d expect from Municipal Waste. Sure, one could argue that a lack of anything particularly new makes this a release that’s unlikely to top anyone but the most faithful fans’ album of the year lists, but what fans will perhaps be most pleased with is that the band have lost none of their proclivity for relentless but light-hearted metal in the five years since The Fatal Feast. With this album, Municipal Waste have retained their status as one of crossover thrash’s most noteworthy names.