The bottomless creative well that encompasses artful and experimental music can often lead to mindless meandering and pretentious elongation, but when a band’s creative output is as jagged and immediate as Perennial’s is, capturing the listener’s attention is an inevitability. Churning out quick-fire bouts of quirky experimentation all wrapped up in as many hyphenated sub-genres as possible (noise-rock, post-hardcore and art-punk all come to mind), the New England trio fashion an eclectic and diverse set of songs on début effort The Symmetry of Autumn Leaves that are, above all else, utterly infectious.

Keyboardist Chelsey Hahn and guitarist Chad Jewett (both sharing vocal duties and both ex-Lion Cub) along with drummer Will Mulheron (ex-Airplane, 1929) all sound distinctly more fiery under their new collective moniker, with dual shouting, wiry distortion and urgent percussion all fuelling Perennial’s flames. 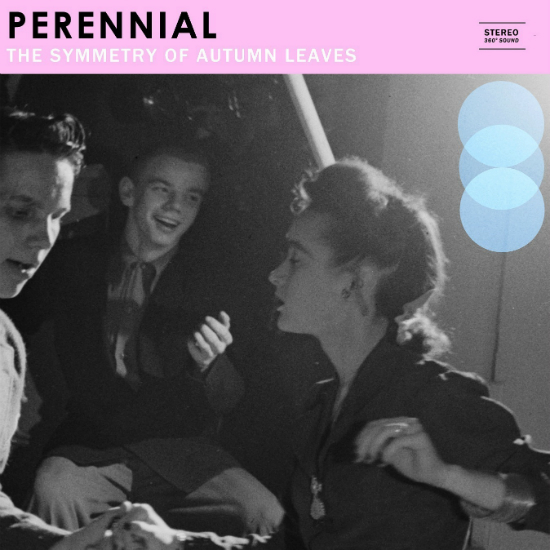 ‘La Fugue Pour Béton brut’ and the short sharp shock of ‘Fauves’ are noise-rock screamers that bring to mind These Arms Are Snakes and Narrows [1], while the raucous garage rock of ‘Hippolyta’ and the wonderfully whimsical ‘Evergreen Un Deux Trois’ inject belligerent energy and shout-a-long lyrics. The raucousness continues through further highlights ‘Dissolver’ and the noisier ‘Resolver’, with the twin vocal attack of Chelsey and Chad working its boisterous allure like a pair of irascible snake charmers. The subtler moments provide Perennial with the opportunity to let loose their creative reigns, with off-the-wall electronica and retro organ melodies their primary weapons of choice. ‘Early Sounds For Night Owls’ exits in a wave of spacey ambiance that continues into the muted tones of ‘Transistor Chapel Roof’, while the mod groove of ‘The Witching Witching Witching Hour Blues’ is a brief slice of noir punk gold.

Perennial’s punk rock is slick, suave and spiky throughout, and despite distinct nods to older sounds gone by, their experimental tendencies ensure the band’s sound remains modernistic and forward-thinking. Only three out of the twelve songs breach the two-minute mark and, coupled with the abundance of ideas on display here, the sensation is that of an album not quite fleshed out enough. While this may be the case in places, the fleeting moments of riotous, avant-garde punk rock is ultimately the album’s key strength, and The Symmetry of Autumn Leaves emerges all the stronger for it.

[1] Both These Arms Are Snakes and Narrows contain Botch alumni, which coincidentally links to Perennial’s choice of Ed Brooks for the mixing and mastering job on The Symmetry of Autumn Leaves.