The Black Dahlia Murder have been remarkably consistent for over fifteen years now, producing seven high-quality, critically-acclaimed albums and earning themselves a place in the hearts of metal fans across subgenres. With eighth album Nightbringers, they are building on their winning formula: aggressive, melodic, technical, but undoubtedly death metal at its core. While there is a formula, it is unique to them and in no way feels tired or complacent; Nightbringers is full of energy and ideas.

First track ‘Widowmaker’ begins with horror movie-style sound effects to set the tone, but once the first few atmospheric seconds are over, there is absolutely no let-up in the frenetic pace of riffing for the rest of the album. This is of course to be expected from a band not known for their slow numbers. With nine concise tracks (all under four minutes except the last) the album is the right length for this constant barrage of energy to work as one single assault.

The riffs are technical – Black Dahlia have always been on the more technical side of the melodic death spectrum, so much so that they appeared at the UK’s Techfest this year – but they avoid pretentiousness. There’s a very natural, classic sense to the motifs, and it might be argued that they could go ahead and take more creative risks. But what I love about Black Dahlia’s riffing is that it has a self-consciousness and sense of humour to it, so important with this type of gory, horror-inspired death metal. 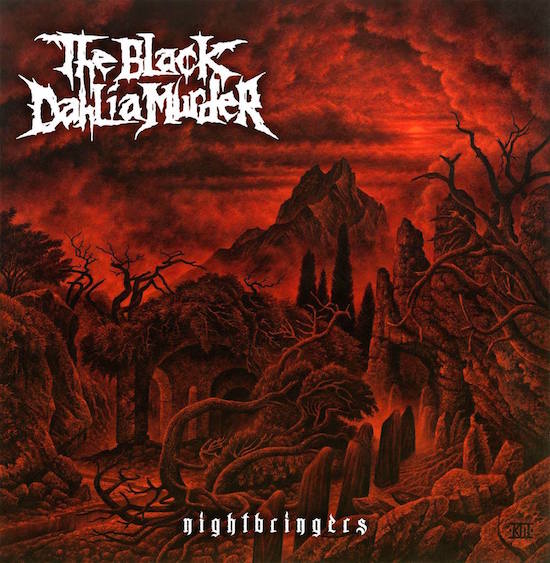 Black Dahlia are still coming up with fabulously catchy hooks. The beginnings of ‘Kings of The Nightworld’ and ‘Of God and Serpent, Of Spectre and Snake’ have you instantly nodding “Yes, this is exactly what I wanted, let’s see where it goes.” Title track ‘Nightbringers’, released as the first single, is so brilliant that it would be worth buying the album for this alone. Black Dahlia are skilled at refraining from over-using their hooks, so that they keep us, well, hooked. I keep listening to the ‘Nightbringers’ track over and over again so I can get another few fixes of that glorious descending second riff.

Last year Black Dahlia experienced a significant line-up change when they parted amicably with lead guitarist Ryan Knight. He would always be a hard act to follow but has been admirably replaced by 25 year-old Brandon Ellis (formerly of Arsis), whose solos are a real stand-out feature of this album. I can’t resist an old-school neoclassical solo and Ellis goes at it 80s-style in every track, throwing around arpeggios with exhilarating fluidity.

Attending to the lyrics adds a whole other dimension of entertainment when listening to The Black Dahlia Murder. With their very name inspired by a 1940s unsolved murder case, the band have always been inextricably linked to horror culture, in a slightly tongue-in-cheek, slasher movie sense. Frontman Trevor Strnad, whose personality infuses the music, is known for his carefully crafted poetry, and Nightbringers is no exception. Rather than lazily throwing in gore clichés, he tells a complete story with every song so that each becomes a mini horror movie in itself. Although I don’t have the lyric sheets, I have discerned that ‘Matriarch’ is about a malevolent woman planning to carve a baby out of another pregnant woman because she can’t have one herself. ‘Jars’ is about an isolated nutter pickling human flesh to eat later, and there is some obligatory necrophilia on final track ‘The Lonely Deceased’, told from the perspective of a lonely morgue worker. Enhancing this story-telling aspect are the varied vocal styles Strnad employs, from Carcass-style rasps to deep growls and gang-shouts. There’s also an impressive coordination between vocals and instruments, confirming that the whole thing has been very carefully thought-out.

There’s really nothing to dislike about this album; it’s a strong addition to The Black Dahlia Murder’s canon of work, and may be their best yet. It will delight existing fans and no doubt win the band many more. The band are currently on tour in the US, and I’ve already got my ticket to catch them in Europe in the spring.