Like a blast from the shotgun of the same name, Twelve Boar erupted on to the metal scene in 2011 and have not slowed down since. Having eschewed the Roman numerals used previously, their subtly altered image brings with a sharper, more focussed explosion of music in the form of No Forgiveness, their third studio album in as many years.

First crack out the barrel, ‘Steppin’ Up’ is a statement of intent: not only is it a ferocious beast of whiskey-soaked blues-metal riffs, but with the subtly changed band name and new image comes a focus on being better versions of themselves, taking more risks, because to do otherwise is to fail. The lyrics make this blatantly clear. Instantly the band have made it clear that while they’re still focussed on having as much fun as they possibly can, they’re looking to build on the success of the previous albums, aiming to always be bigger and better. Musically, the song bears this out, with some fantastic shredding in the bridge.

“Steppin’ up, this is what it’s all about”… “you’ve got to grow up than give up, now shut up, don’t waste all your precious time” … “the biggest failure is never to try, aim for the moon, settle for the sky.”

The whole album bears this out, in fact. It’s a more consistent affair than its predecessors, with only one song coming in shorter than three minutes. No amusing interludes like ‘Penetrator’ from Beyond the Valley of the Triclops or ‘Crawdaddy Blues’ on Pitworthy, it is instead book-ended by its longest two songs, and the time between is filled with fearsome blues-metal, which crescendoes towards the gorgeously wistful ‘Panama’. While it lacks varied dynamics and pace, causing the songs to blend into each other somewhat, it makes up for this with entertaining guitar-work and some experimentation sprinkled throughout: for example, the seamless blend of rapping and riffing on ‘Golden Goose’ would make Rage Against the Machine pay attention. ‘No Forgiveness’ exhibits the kind of whiskey-soaked Southern blues rock that would make Lynyrd Skynyrd hang up their Stetsons, and if there is any justice in this world, the furious vocals and excellent riffs of ‘Hellspeed Truckin’’ will be a firm staple of their live set. 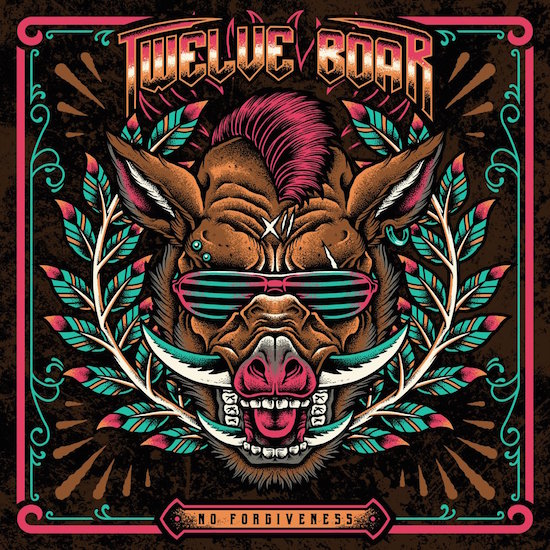 If there is anything to moan about on this album, it’s that the new way of writing their name has messed with my filing system – a personal gripe. Although the pace and dynamics do not vary across the tracks, Twelve Boar have put together a much more consistent record in No Forgiveness than either Beyond the Valley of the Triclops or Pitworthy. Both were fine records, but No Forgiveness feels like the band have finally hit on what they want their sound to be: whiskey-soaked Southern blues metal or, to coin a phrase, ‘trucker metal.’ It’s the kind of metal Jack Daniels would commission if they wanted to have an aural accompaniment to their latest tipple, to be heard in bars and clubs across the good ol’ USA, and I encourage listeners to raise a glass (just one, drink responsibly) in toast to Twelve Boar’s new direction.

For further reading, check out Nick’s reviews of The Valley of the Triclops and Pitworthy.