Trending
You are at:Home»Reviews»Metal»Vallenfyre – Fear Those Who Fear Him
By Stephen Fallows on June 7, 2017 Metal, Reviews
Band: Vallenfyre
Album: Fear Those Who Fear Him
Record label: Century Media
Release date: June 2nd, 2017
Facebook
Purchase/Download
Tracklisting:
1. Born to Decay
2. Messiah
3. Degeneration
4. An Apathetic Grave
5. Nihilist
6. Amongst the Filth
7. Kill All Your Masters
8. The Merciless Tide
9. Dead World Breathes
10. Soldier of Christ
11. Cursed from the Womb
12. Temple of Rats

I’ve never liked the term ‘super-group’, but the sprawling behemoth that is Vallenfyre is one band that deserves that title, consisting as it does of Gregor Mackintosh (Paradise Lost) on vocals and guitar, Hamish Glencross (ex–My Dying Bride) on guitar and Waltteri Väyrynen (Paradise Lost) on drums. They have returned with another slab of grim extremity in Fear Those Who Fear Him. Their first two albums were both rightly up there in many end of year lists, and this collective seem intent on carrying on their excellent work so far, only this time they are bringing a few new elements to their usual coarse amalgamation of crushing doom and crust/grind noise.

The impressive thing about this new record is that they have pushed themselves to add new twists that offer new dimensions to an already impressive array of noise. This is apparent right from the start after the introductory feedback has died down on ‘Born to Decay’, when a new more melodic approach takes over – melodic in the sense of 90s melodic death metal scene, there is nothing nice on this record. They’ve always had layers of distortion on their guitars, but this groove has a feel of Wolverine Blues-era Entombed about it. This follows onto the first half of ‘Messiah’, before it all collapses into a huge grinding cacophony. 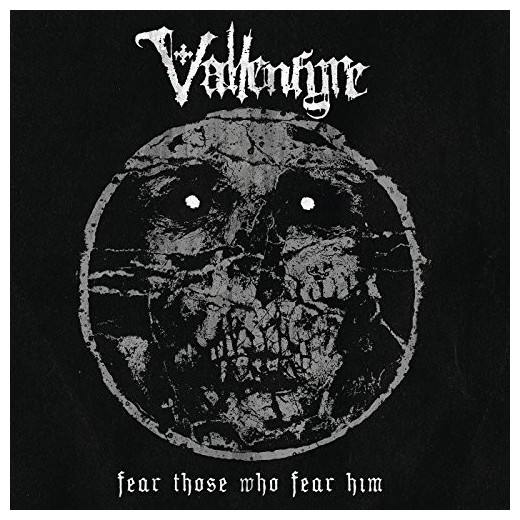 While a lot of the tracks feature faster sections, it’s not as full on as the previous albums in that sense. This album leans more towards a more death-doom vibe about it than grind, although the heavy punk influence is obvious throughout, with its simplistic but highly effective viciousness. ‘Nihilist’ is the standout track for me, and with its pure old school death metal approach, it’s yet another weapon in their impressive inventory of mayhem. As well as the more up-tempo tunes of the album, Fear Those Who Fear Him has three 5-minute plus tracks, when the doom takes over. Monumentally heavy tracks, with the pick of these being ‘An Apathetic Grave’, which not only give a hint of the band’s origins and “day jobs” of each of the members, but also works really well to counterbalance the faster material and thus result in a diverse album when taken as a whole.

Overall, the 40-minute running time of Fear Those Who Fear Him contains a lot more variety that the vast majority of extreme metal. There are some bands who combine a couple of different styles well, but very few are able to play the whole gamut of extreme metal from lumbering doom to chaotic grind, and have time for some melodic death metal along the way. It’s not just this combination, but the way they have brought it all together so proficiently that it all works and nothing feels out of place. A very worthy addition to a fine catalogue and well worth investing your time and money in. It might not quite hit the height point that Splinters did, but that was an Album Of The Year for me, and this won’t be far off it come December either.