Trending
You are at:Home»Reviews»Metal»Xanthochroid – Of Erthe and Axen, Acts I & II
By Hera Vidal on December 15, 2017 Metal, Reviews
Band: Xanthochroid
Album: Of Erthe and Axen, Acts 1 & II
Record label: Erthe and Axen Records
Release date: Sept & Oct 2017
Facebook
Purchase Act 1 / Purchase Act 2
Tracklisting:
Act I:
1. Open the Gates, O Forest Keeper
2. To Lost and Ancient Gardens
3. To Higher Climes Where Few Might Stand
4. To Souls Distant and Dreaming
5. In Deep and Wooded Forests of My Youth
6. The Sound of Hunger Rises
7. The Sound of a Glinting Blade
8. The Sound Which Has No Name
1. Reveal Your Shape, O Formless One
2. Of Aching, Empty Pain
3. Of Gods Bereft of Grace
4. Of Strength and the Lust of Power
5. Walk With Me, O Winged Mother
6. Through Caverns Old and Yawning
7. Through Chains That Drag Us Downward
8. Toward Truth and Reconciliation

My issue with parts/acts of concept albums is that it can go one of two ways: a) each part is good on its own and fantastic when put together; or b) one part is better than the other, making the whole concept seem less than what it is. Considering that my experiences with concept albums in recent times range from great (Ayreon’s The Source, Devin Townsend’s Z² – Dark Matters) to meh (Pain of Salvation’s Road Salt One / Two), I tried to approach Xanthochroid with an open mind. Whichever way it went, I hoped to at least enjoy the music that comes from Xanthochroid’s brand of “cinematic black metal”.

Xanthochroid’s previous release, 2012’s Blessed He with Boils, was critically acclaimed for the sweeping, majestic music that accompanied its original lore. Of Erthe and Axen is the prequel to what happened in the EP Incultus and on Blessed He with Boils, and it even comes with lore and a listening guide [1] that the listener should read if interested. [2] Because Of Erthe and Axen is in two acts as separate albums, I have decided to talk about Act I first; then Act II, and finally my closing remarks on the albums as a whole. 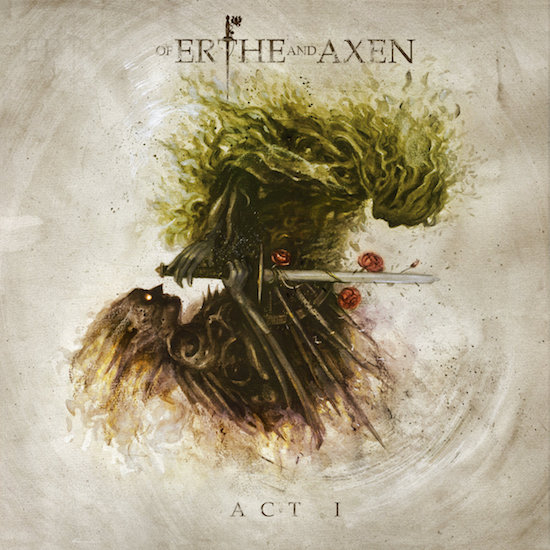 Of Erthe and Axen, Act I
If there is one thing that Xanthochroid is incredibly good at, it’s their music. Everything about Of Erthe and Axen is expertly crafted and layered, to the extent that it feels live. The music is majestic, filled with color and drama that only accentuates the story of the first act. Because of the nature of the music, the sweeping crescendos assert an importance into what we are looking into, while also adding to the tension in the story. Even the quiet moments add to the awe-inspiring nature of it, as you can take the time to appreciate the orchestral and choir work. There is also a reverent quality to it that makes you take note of what’s truly going on; whether or not it was intentional, it works towards making the listener pay close attention to the changes in the music. What you get is an epic presentation of what black metal can sound like if given the chance to adapt into other endeavors. If this is what progressive black metal could potentially sound like, then I am all for it.

What I love best about this album is the vocal complexity; outside of the music, they are the strongest part of the album. While they all feel different, each style has their own personality that can be conveyed through the music. The harsh vocals are also used sparingly, tending to come out during the more moving parts. Obviously, the focus is not placed on the harsh nature; instead, the focus is placed on the cleaner vocals, allowing the album to have a lush, rich nature. The vocals also sound grander than what you would get from four voices [3] – it feels like Xanthochroid asked an actual choir to back their music and the lead vocals. It’s an excellent choice, as it feels intimate and beautiful, as if you too are a part of what’s happening in the story. The album closes with the epic ‘The Sound Which Has No Name’, bringing the whole choir to full force as the music reaches its climax, ending abruptly to the sound of silence.

Of Erthe and Axen, Act II
Act II begins directly after the end of Act I, a funeral dirge playing after the aftermath of ‘The Sound Which Has No Name’. This brings forth the idea that this second act will be both more somber and harsher than Act I, focusing more on the heavier aspects of the music and vocals rather than on the artistry behind it – and this is indeed the case. The music continues to be lush and majestic, but the focus has shifted to a darker outlook. In contrast to Act I, which sounded jubilant and awe-inspiring, Act II is mournful while retaining its reverent nature. The vocals have definitely changed here, as the growls are the focus now. Granted, the sweeping, majestic nature of the music as heard in Act I are still abound, but the melancholic nature of the music takes precedence, especially when the chanting comes in.

The thing I enjoy most about Act II, outside of the vocals, is the emotional complexity that gives the music a vibrancy that is different from what was heard in Act I. The somber nature of ‘Reveal Your Shape O Formless One’ sets the tone for the rest of the album, even with a particular focus on the heavier tones. Every emotion is played towards the music: you can feel the sorrow, the loss, the betrayal, and the eventual anger that comes at the death of a loved one. There is also an energy that stems from the heightened emotions, creating a dynamism that fully encompasses the vibrancy of the music and let it intertwine with the vocals. This also creates an inconsistency that, while it could have made this act weaker, instead makes it stand out more, especially when it got resolved in the fittingly titled ‘Towards Truth and Reconciliation’. This makes sure the contrasting nature of the albums were resolved at the end, allowing for the albums to tie up any loose ends musically.

Closing Remarks
If you were expecting a black metal feast of fast blasting, tremolo picking, and everything that makes black metal its own class, prepare to be disappointed. Xanthochroid is cinematic and have progressive influences running through their music, but the blackest black metal thing about them is the harsh vocals. However, if you happen to enjoy both concept albums and lush music with gorgeous vocals, then Of Erthe and Axen is for you. Because this is essentially a double album, it may take a few listens to understand what’s going on. While the idea of having a double concept album may seem like a gimmick – in that it would have been easier to release these albums as one with two discs – it doesn’t feel gimmicky. Both of these albums feel authentic and dynamic, a true testament to the production values and the work that went into creating them. They were brave in their decisions and it paid off. Five years is a long wait, but Of Erthe and Axen was worth the wait and I fully suggest listening to both albums.

Footnotes:
1. Lore on the website
2. Taken from the credits on the Bandcamp page.