The words of Euronymous, despite being something of a contentious figure [1] in black metal circles, still carry weight. Back in 1994, in an interview with Metalion in issue 10 of the now-legendary Slayer ‘zine, the Mayhem guitarist made special mention of Rotting Christ as making him happy, a ‘band that bears the spirit from the ancient days.’ In this instance, he wasn’t wrong. He even had plans to sign them to his label Deathlike Silence productions, a scheme that was somewhat curtailed by his murder. [2]

Rituals, Rotting Christ’s 12th full-length album, is not just a distillation of everything frontman Sakis Tolis has been working toward over the past 28 years (as their merchandise proudly states, “since 1988”), it’s also a great album – stirring, massive and intelligent whether listened to as a whole or as individual tracks. Rituals is also a selection of hugely complex arrangements – but that’s nothing to be surprised by. Since 2007’s Theogonia Rotting Christ’s layered blend of Mediterranean melodies, chanted vocals and folk instrumentation on top of the “chuggingest” guitars in the business has been an immediately recognisable aural trademark. However, where Kata Ton Daimona Eaytoy felt like a direct successor, stylistically speaking, to 2010’s Aealo, Rituals is a bit more of a leap. It’s still undeniably Rotting Christ in terms of approach, texture and composition, but its tone is far darker – and right from the get-go (opener ‘In Nomine Dei Nostri’s invocation of just about every denizen of hades imaginable pulls no punches) the overall sound Rotting Christ produce is much more confrontational.

This aggressive stance might not seem surprising to an outsider (the band’s name is Rotting Christ, after all) but it definitely holds the potential to raise eyebrows. Sakis was also prepared to assume a false name (Χ Ξ Σ, something any fan would recognise immediately, while smiling at the irony: is ‘Rotting Christ’ really so much more offensive than ‘666’?) for two upcoming shows in my home country, South Africa [3] – a move that met with varying reactions internationally, but much gratitude from a South African fanbase desperate to experience quality metal acts. This conciliatory approach may seem a bit out of character when taken in the context of the current album, but the local promoter has recently switched back to billing the shows under Rotting Christ as a reaction to a fundamentalist petition against so-called ‘satanic bands’ made mainstream news. [4] 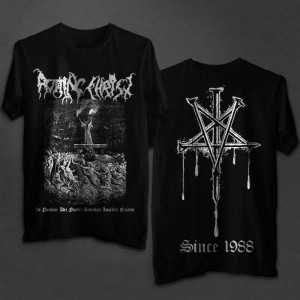 Making waves might be exactly what black metal does best, but Rotting Christ take it a step further, by adding intelligent and memorable songwriting to the mix. Historically, Rotting Christ has always been a ‘traditional’ metal band, building songs around guitar and drums. Rituals is no exception, despite the addition of a number of alternative instrument arrangements wound throughout. Catchy chorus chants and a slightly lowered tempo overall – Themis Tolis’ blastbeats and tight martial drumming rarely stray above the 150BPM mark – lends Rituals a menacing tone in the vein of Celtic Frost, especially in the main riff of ‘Konx Om Pax’ The nod to Tom G Warrior doesn’t end there either – ‘The Four Horsemen’, a cover of Greek prog rockers Aphrodite’s Child’s 1972 original, carries on in the same doom-tinged vein.

As on previous records, the massive wall of mid-tempo metal is expanded on with traditional Greek folk instruments and guest vocal performances. The frenetic, vitriolic venting by Danai Katsameni (from the National Hellenic Theatre) on ‘Elthe Kyrie’ isn’t quite the Diamanda Galás worship that was Aealo’s cover ‘Orders From the Dead’, but it fits the staccato thrash riffing of the song beautifully. Sakis’ growling response verses, layered over soaring, sustained orchestration and the restrained tapped lead section are almost a balm after the venom of the female vocal verses. 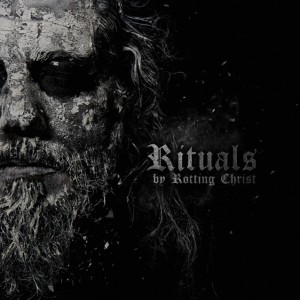 The expanded range of vocal experimentation present on Rituals is really what marks this album as the next step in the evolving sound of Rotting Christ. On top of Sakis’ unmistakeable bark, we have clean spoken-word French (supplied by Vorph from Samael) and English (‘Les Fleurs du Mal’ and ‘For a Voice Like Thunder’ – a martial tribute to William Blake – respectively), soft whispers (‘Tou Thanatou’) and the aforementioned female vocal performances all blending together in a blackened opera spectacle, wherein the human voice becomes another instrument in Sakis’ orchestra. A number of guest artists provide this additional layer, including Nick Holmes (Paradise Lost), Kathir (Rudra) and Magus (Necromantia). [5] The last song mentioned, ’Tou Thanatou’, is the album’s highlight for me: the more I listen to it, the more its subtle incorporation of folk and dynamic changes of pace put me in mind of ‘Nemecic’ (off Theogonia), only polished, darkened and even more sinister. Being a bagpiper myself, reed instruments hold a special place in my heart and both these compositions make excellent use of the instrument. Another Mediterranean black metal band, Italy’s Selvans [6] also effectively exploit reed flutes in making equally dramatic, powerful music.

‘Theatrical’ is probably the perfect word to sum up Rituals. Palm muted triplets, violent double bass and growled vocals may be the foundation of the Rotting Christ sound but clever pacing of songs (the slow, tense build on ‘Ze Nigmar’ before the more driven attack of ‘Elthe Kyrie’ is a perfect example) and interludes make the entire album seem like a series of scenes from some war-torn history being acted out. The call-and-answer introduction to ‘Apage Satana’ itself comes across as enactment more than rendition: other bands may get on a stage and play their songs for an audience, Rotting Christ put on a planned, prepared performance.

This review may be tainted somewhat by my excitement at the prospect of finally seeing a band perform live that was spoken of in hushed, awed tones as a teenager in the mid-90s. Sadly, thanks to South Africa’s limited exposure to good music, [7] I only really discovered this band around the time of the Aealo album, but despite this, I do think Rituals is the best thing Rotting Christ have done. Admittedly, when I first listened to ‘In Yumen – Xibalba’ (from Kata Ton Daimona Eaytoy) I thought they had reached their pinnacle. I can only hope they continue in this trend and keep upping the musical ante.

FOOTNOTES
1. Whether it was his elitist stance, his political beliefs or his grandiose claims, the Norwegian black metal scene has always been a bit divided on Euronymous’ actual place in kvlt history. ‘Until the Light Takes Us’ (full documentary here) is possibly the most diplomatic overview of the birth of the second wave of Scandinavian black metal.

3. This TeamRock article spells things out pretty well. Metalsucks, unsurprisingly, responded to this news with their usual tongue-in-cheek approach as this article illustrates.

4. Example number one and example number two (in Afrikaans) of the rampant fundamentalism present in the South African media.

5. Interestingly, Magus is in another long-running band with Sakis called Thou Art Lord, not to be confused with the Rotting Christ song of the same name.

6. The band’s website is a good first port of call for discovering this band if you haven’t already done so. I would describe them as a hybrid of Mgła’s sombre menace and Winterfylleth’s folk-influenced atmosphere.

7. Part of the fallout of life before democracy was minimal access to international recordings besides the more ‘mainstream’ acts – Iron Maiden, Metallica and AC/DC were staples in record stores, with the occasional import making rounds. See our article on South African heavy metal history for a bit more insight to metal in South Africa, pre-1994. Sam Dunn’s Banger TV (channel link here) has three recent videos that showcase the contemporary South African scene and support the article.