Bombastic. Triumphant. There are only so many words to describe the sound of Sabaton’s latest album Heroes. Themed around the idea of war heroes, defined by bassist Pär Sundström as “individuals who basically went beyond their call of duty”,[1] each song relates the brave actions of a particular war hero or heroic regiment from World War Two. It is a rousing collection of power metal anthems, presenting the listener with a magnificent addition to the Sabaton discography.

The blistering opener, ‘Night Witches’, blasts its way through the somewhat neglected story of an all-female Russian bomber squadron, the 588th Night Bomber Regiment.[2] The pilots would idle the engines of their planes as they neared their targets, ensuring as stealthy an approach as possible before delivering the payload. The noise the planes made as they glided on the wind sounded like witches flying on broomsticks, leading the Germans to label them Nachthexen, or “Night Witches.” Combining the backing choir’s explosive crescendo at the beginning, fade out at the end, and newcomer Hannes van Dahl’s pounding drums, the song is, in essence, a perfect musical representation of the Night Witches’ attacks.

The two singles, ‘To Hell and Back’ and ‘Resist and Bite’, are the other major highlights of the album. The first is a biography of Audie Murphy, and Cracked.com do a much better job of telling his story than I can,[3] so I will say only that he was one of the most decorated soldiers in World War Two. Musically, the song’s opening flute motif echoes the fife-and-drum of marching songs used in parade grounds, but has a ghostly feel to it and, taken up by the guitar, haunts the rest of the song. Murphy was diagnosed with post-traumatic stress disorder after the war, but locked himself in a hotel room for a week to kick the addiction he developed to the drugs used to treat him for it; hence, perhaps, the ghostly flute motif. The lyrics, in part adapted from his poem Crosses Grow on Anzio[4] and part highlighting his actions in combat, combine with the stirring music to make a triumphant story out of a man struggling against PTSD. ‘Resist and Bite’, meanwhile, tells of the Belgian Regiment of Chasseurs Ardennais (battalion of hunters from the Ardennes), who put up fierce resistance against the German invasion of Belgium.[5] The chorus is a rousing call-to-arms, proudly proclaimed over a marching beat and growling guitars that evoke the chatter of machine-gun fire, all of which combine to make the song a fearsome opener to the latter half of the album. 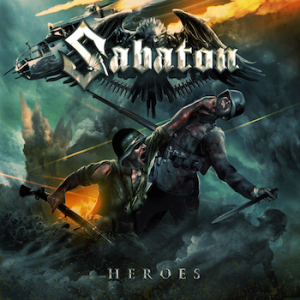 It is in the B-sides, however, where my one problem with the album arises. There is little musical variation between each song on Heroes itself, and there are only so many stirring anthems one can take before it becomes repetitive. The more bass-driven sounds of bonus tracks ‘7734’ and ‘Man of War’, and their subject matters – a play on metal being evil and an homage to Manowar respectively – may not fit comfortably with the World War Two theme of the rest of the album, but they represent a welcome change of pace that could have been included, musically if not lyrically, in the official track list to balance out the overall sound. Although ‘The Ballad of Bull’ is a slower, more melodic break in the middle of the album, it feels as if Joakim’s voice is too coarse, for lack of a better word, for the music behind it. Fantastic as his keyboard skills are, his gruff vocal style grates against both the piano and the orchestral sounds underneath it. It is only the aforementioned songs, as well as the two singles and the opener, that really stand out musically, and the rest sound fairly homogenous, which diminishes the album’s power as a whole. This may, understandably, be due to the new band members playing it safe during the composition of the songs, and returning to a pre-Carolus Rex sound so as not to upset older fans, but it is still a fault in an otherwise fantastic album. The overarching theme of Heroes may also give reason for the songs sounding the same, but this is less forgivable than new band members not wanting to upset the fanbase.

These minor personal criticisms aside, the album is a triumph. As a relative newcomer to Sabaton, I was worried that they might be more enthusiastic about war than my pacifism would be comfortable with, but I needn’t have worried. A scroll through their discography highlights the balance they strike between praising the actions of the brave and condemning the horrors that result from war. Sabaton maintain this balancing act on Heroes, never allowing the songs to become jingoistic in glorifying the heroes in question. They do this by highlighting the horrors of war: ‘Inmate 4859’ brings the complex politics of war to light from the shadows of Auschwitz; the previously-mentioned ‘To Hell and Back’ deals with post-traumatic stress disorder; and ‘The Ballad of Bull’ explicitly states that war is more than just killing and highlights the nobility of saving lives in amongst the horrors of war.

The album demonstrates how heroism and horror go hand-in-hand in war, and gives it a depth not seen on other war-themed albums, which either treat the heroes as legends, like Turisas in The Varangian Way, or Bad Religion‘s war protest album The Empire Strikes First. Furthermore, as a historian, it is always refreshing to discover new historical events to delve into and I shall certainly be doing some catch-up reading on the Night Witches. Musically, any fears that the new band members wouldn’t stand up to their predecessors can be put to rest. They stand confidently with Joakim and Pär, defiantly stating to fans new and old that this new line-up is Sabaton, just as fearsome and magnificent as it always has been. This, then, is the triumph of Heroes: a new line-up have crafted a fantastic album that, despite a slightly repetitive sound, stands shoulder-to-shoulder with its widely-celebrated predecessors, and promises much more to come.

Footnotes:
1. http://www.grande-rock.com/sabaton-2014
2. http://en.wikipedia.org/wiki/Night_Witches (The True Widow song of the same name is worth looking up, but does not convey the same gravitas as Sabaton’s tribute.)
3. http://www.cracked.com/article_17019_5-real-life-soldiers-who-make-rambo-look-like-pussy_p2.html
4. Available to read here: http://www.audiemurphy.com/poems.htm
5. http://en.wikipedia.org/wiki/Chasseurs_Ardennais