Trending
You are at:Home»Interviews»Sakis Tolis (Rotting Christ): “As long as our biological power permits, we will go till the end!”
By Angel on April 26, 2016 Interviews

Rotting Christ are a curious entity. The Greek band are fiercely defiant in their traditions, and yet their evolutionary arc since those primordial days nearly three decades ago has been remarkable as they incorporate ever more stylistic variation in their black metal. As frontman of the band, Sakis Tolis was the natural person to speak with regarding this latest incarnation of the band, their fascinating new album Rituals [reviewed here] and the scene from which they were spawned.

Sakis is in a jovial mood when answering. Reflecting on the band’s recent performance at 70000 Tons Of Metal – the famous cruise from Miami to Barbados which packs a number of impressive bands on an equally impressive ship – he quips, “Sailing in the ocean together with another 3000 metal heads ain’t that bad, right?” He does however acknowledge that the band’s extreme style of metal was a little strange in the blazing sun: “A none-too-black metal experience, but definitely one of the most interesting experiences in my career.” And with a career of 25 years in Rotting Christ, that’s quite a statement.

As the latest milestone in their career, it is inevitable that we discuss the band’s newest album Rituals, a record with plenty of talking points to dive into. Firstly, the guests: from legends in metal such as Nick Holmes of Paradise Lost/Bloodbath and Vorph from Samael reciting poetry, through old friends in the underground like Magus from Necromantia and Kathir of Rudra, to the left-field placement of Danai Katsameni from the Hellenic National Theater in a memorable vocal spot on ‘Elthe Kurie’. Speaking highly of these performers who “lift up the songs”, Sakis comments “I adore their capabilities as musicians, and of course I respect their personalities,”. Each of them are felt clearly on the individual tracks, whether it’s Holmes’ commanding intonation of William Blake’s writing on ‘For A Voice Like Thunder’ or Vorph reciting Baudelaire’s Les Fleurs Du Mal in ‘Les Litanies De Satan’.

Linguaphiles may well have noticed the number of languages spoken on Rituals: aside from the obvious English, there’s Aramaic, French, Sanskrit and, of course, Ancient Greek. “I felt like traveling back in time and being a part of history. A quite challenging procedure that I really enjoyed. It also open some horizons,” presumably in reference to some of the guests on the album. “History keeps well-hidden treasures!” 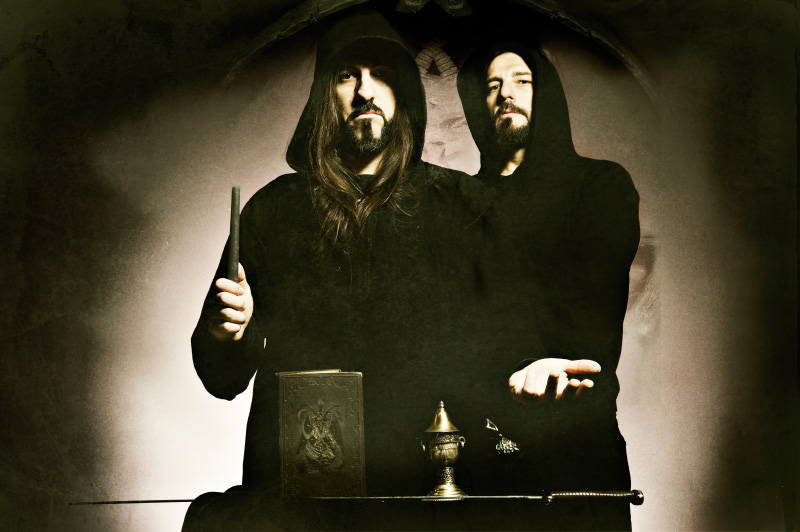 This leads us onto our next point: the sheer depth of mythology referenced in Rotting Christ’s work. In the last few albums alone they’ve gone from Mesopotamian and Assyrian mythology to Russian, Greek, and even Mayan mythology. “All civilizations have something interesting to teach you and this is what attracts me, trying to bring it back to life. I like in my last albums first to read and then to take the guitar and write a song.” The spirit of these myths inspired some of the best songs in Rotting Christ’s arsenal to date, whether in ‘Elthe Kurie’, or the fascinating cover of ‘Tou Thanatou’ by Cretan folk musician Nikos Xylouris, as highlighted in Dayv Oblyvyon’s review.

Rotting Christ has always been renowned for a defiant stance in both the black metal community and the world at large. While their musical style may have shifted from the days of Thy Mighty Contract in 1993, “our heart still belongs to black metal,” albeit this time they have a more honed cause to strike for: “the total liberation of minds. This time we know better how to hit the core!” While the band have stayed true to the black metal ethos as Sakis views it, he is more skeptical of other bands embodying their ‘non serviam’ motto. “In the last decades, big social changes have returned people back to a kind of dogma and, I am afraid, to a phobia that will return humanity back to the dark ages.” There is still hope, however, at least in terms of underground music. When asked to point to specific bands Sakis has been enjoying from his home country, he replies, “So many that I will sound rude if I forget anyway. The Hellenic scene currently lives an orgasm of creation.” [1]

It is this Hellenic underground scene which spawned them, and Sakis is thankful both for the bands that surrounded Rotting Christ, and for his own brother who has been by his side in the band since the beginning. “I do not hide that there are ups and downs in a more than quarter of a century relationship. But I do not think that you can find a most trustful person. So all good, and we still keep the spirit alive together!” He is defiant to the last, a fierce pride imbued in his words: “We are still here since the very early days and we still are frontline in the battlefield. As long as our biological power permits, we will go till the end!” Non serviam, fellows.

Thanks to Sakis for his time and Enrique for the opportunity. Rituals is available via Season Of Mist.

N.B. This interview was a collaborative piece featuring research and questions from Zaina Nazerally and Wemmy Ogunyankin.