Guess what everybody? Sepultura are back. It’s been four long years since their last release, The Mediator Between Head and Hands Must Be the Heart in 2013 – the longest gap between any Sepultura records to date. It’s fair to say that a lot has happened to the world since then. The band’s latest album Machine Messiah covers themes of religion, technology and violence – rather than the socio-political angle the band has been known for, which would have been easy pickings given recent events. The Brazilian masters of metal may have been absent for longer than usual, but boy, it was worth the wait.

Machine Messiah is a brutal, mesmerising album. The record twists and turns across its full duration, introducing unexpected elements to a band who have been going for over 30 years, such as clean vocals. This is an album that showcases all aspects of what fans have come to love about Sepultura over the years, too – their heaviness, their progressive nature, and their ability to throw in the unexpected effortlessly. Machine Messiah is a record that combines the best of thrash, progressive and death metal. It’s exciting and vibrant throughout.

Take the opening title track for example; this slower, atmospheric song builds to something rather special: a heaviness set to a slower pace than Sepultura usually embrace. ‘Machine Messiah’ creates an expectation of the unexpected with this album, before diving straight into what the band is perhaps best known for with ‘I Am the Enemy’: high-tempo, heavy thrash reminiscent of their earlier material and the bands that inspired them, such as Metallica. ‘I Am the Enemy’ isn’t mind-blowing like the rest of the album unfortunately – it’s a solid, brutal thrash track, but it doesn’t carry the weight or inventiveness of the rest of the record.

From there the album diverges: there are violin sections, clean vocals and, of course, tribal-sounding percussion – it wouldn’t be a Sepultura record without the latter since Roots back in 1996. Machine Messiah is at its best when the tracks are longer and more progressive, containing elements such as those listed above. ‘Phantom Self’, ‘Sworn Oath’ and ‘Cyber God’ all show that the band is still improving and experimenting with their sound, whilst retaining the aspects fans have come to love. The tracks with the aforementioned violin sections – and clean vocals in the case of ‘Cyber God’ – are the ones where the band’s work with producer Jens Bogren [1] is felt the strongest. They may showcase that Sepultura are open to new sounds and ideas the more experimental elements of the record, but they all retain the core tenets of Sepultura’s sound – they are brutally heavy and uncompromising in nature.

Then there is ‘Resistant Parasites’. Perhaps the heaviest track on the record, it calls to mind the chunky riffs and excellent bass-playing of Korn at their best – Paulo Pinto Jr’s moment in the sun. Conversely, ‘Silent Violence’ and ‘Vandals Nest’ round off the record nicely, with a more classic Sepultura thrash sound to them – intense, fast affairs. Machine Messiah is full of nice surprises and moments that make your hairs stand on end. 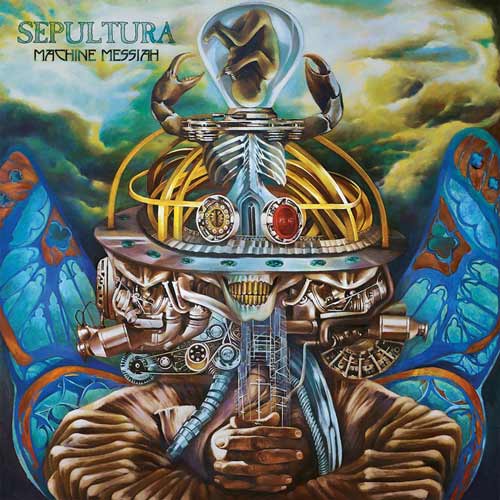 In a studio report, the band stated they “learned a lot of things about [themselves], and being able to push ourselves with our sound… it feels such a musical album.” [2] It sounds grandiose at times, carrying a more melodic sound overall than most of their previous work. This in no small part to the guitar and drum work respectively. Andreas Kisser certainly hasn’t lost his aggression or eye for detail. Eloy Casagrande’s drumming is equally impressive. ‘Alethea’ and ‘I Am the Enemy’ are strong examples of his considerable talents. ‘Alethea’ showing his slower, more groove-laden side, whilst the bonkers blast-beats of ‘I Am the Enemy’ take the blistering metal drumming sound into the stratosphere. Casagrande also played a larger role in writing the album this time around, and it shows; there are echoes of the expert drumming of Dirk Verbeuren and his big imprint into the writing of Soilwork‘s latest records.

If there is one area where Machine Messiah could have been improved, however, it’s the vocals. Derrick Green is undoubtedly a great vocalist, and Machine Messiah is up there with his best work, but it could have benefited with more backing vocals and a more favourable balance toward clean singing. The tracks with more vocal variety stand out, such as the opener ‘Machine Messiah’ and the incredible ‘Cyber God’ that expertly closes the record.

There is no doubting the quality and power of this album. Thought 2016 was rough? Listen to this as a pick-me-up. Do you want to think about religion and faith, and how it can all be tied into the scary, fast rise of technology? Give this record a whirl. Just want to listen to a monumentally heavy album? Machine Messiah is for you. Whatever you want to take out of this record, you can. But everyone will agree after a listen that not only is 2017 off to a spectacular start, but that Sepultura are back and in fine form.

Footnotes:
1. Jens Bogren has worked an astounding range of bands including the likes of Opeth, Soilwork and Devin Townsend.
2. Studio report on YouTube.