Such a docile town harboring such a dark secret. Underneath the streets of quaint Bath, England, one band rumbles with a psychedelic, riff-powered and above all doom-laden force. Sergeant Thunderhoof prepares to ride once more, 18 months after redefining the duration of an EP with the 40-minute slab Zigurat.

Opening Ride of the Hoof – their début album – with a 9-minute track is a gutsy move for this four-piece, but ‘When Time Stood Still’ is up to the task. Thick, oozing and grooving riffs from Mark Sayer fill the speakers, with Dan Flitcroft’s warm and bluesy vocals sitting pretty on top, and a rumbling thunder underneath signifies the might of Jim Camp bass strings and Darren Ashman’s kit. As the track progresses, more and more doom creeps in during breaks in the song, while solos come flying out, and the song resolves itself with Flitcroft adopting a raspier bellow before a bass lick shows everyone the door. 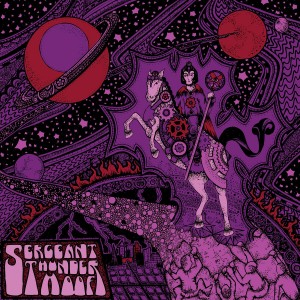 Sergeant Thunderhoof clearly take inspiration from the 60s and 70s in psychedelia and proto-metal (the cowbell in the above track proves that), but their music avoids sounding dated, and they have plenty of room to experiment. ‘Planet Hoof’ and ‘Goat Mushroom’ doom hard, especially the 13-minute latter track where one particular riff obliterates the song with a monstrous tone. Conversely, ‘Enter The Zigurat’ and closer ‘The Staff Of Souls’ toy with psychedelic expectations, delivering mellower numbers to counterbalance the weight of the other tracks.

The production on this record is certainly of note; a lot of fuzz-driven records run the risk of sacrificing clarity in the name of inducing tinnitus, but Ride of the Hoof strikes a perfected balance for their genre; the riffs have crunch as they should, but with a smoothed edge that showcases remarkable and diverse vocals. The lyrics may be a little questionable at times (“My sexy lady/My sacred gypsy” rounds out ‘Goat Mushroom’) but Flitcroft is clearly having fun singing of spacecrafts and Satan. And mercifully, ‘Reptilian Woman’ is not a David Icke track but a hilarious anecdote involving a well-endowed alien:

“She’s a hell of a woman
She’s got snakes for thighs
She’s coming to get you, NO!
Reptilian woman, she’s got breasts of size
She wants me inside her, NO!”

For most of the 50-minute record, the band have their style down pat, but occasionally they toe the line of their influences; ‘Reptilian Woman’ is one such example, where it is impossible to shake the Black Sabbath from their riffing – wiggles à la the band’s eponymous song included – in the latter half. In fact, the phrase ‘former/latter half’ comes up a lot throughout this record; the longer songs give the impression of two songs stitched together seamlessly, which certainly provides for variety but can be a little jarring on initial listens. Another confusing move, although not a misstep, is ending the album on ‘The Staff of Souls’, a brief 5 minutes that feels more like a melancholic coda after the grand finale of ‘Goat Mushroom’.

Ride of the Hoof may be caught up in a sweeping new wave of British doom that’s seen the likes of Alunah, Greenhorn and Undersmile rise to the crest, but with songwriting like this so early into their trajectory, it won’t be long before Sergeant Thunderhoof can be counted among these ranks. Ride on through the streets of Bath!