In 2009, metal giants Cannibal Corpse and Killswitch Engage played the Rockstar Mayhem Festival together (albeit playing on different stages). Adam Dutkiewicz of Killswitch Engage (guitarist and former drummer) approached friend and prolific Cannibal Corpse singer George “Corpsegrinder” Fischer to do vocals for some songs he had been writing. Fast forward to present day, and the fruits of that conversation resulted in Serpentine Dominion, a three-piece supergroup that also includes former Black Dahlia Murder member Shannon Lucas on drums. Metal Blade have released their much anticipated debut self-titled album, and has no doubt whet the appetites of fans of the bands the project derived from.

The album eases us in with an acoustic intro establishing melodic intent and then ups the heaviness with metalcore-type riffs before it finishes. ‘Vengeance in Me’ comes in immediately with blast beats and classic Corpsegrinder growling, adding the death metal element to the momentum built in the first track. The majority of the tracks are melodic death metal with touches of metalcore; Dutkiewicz utilizes clean singing in the choruses of ‘Vanquished Unto Thee’, ‘Sovereign Hate’, and ‘On the Brink of Devastation’, while ‘Vengeance in Me’ has gang vocals. A prelude calms things down using a somber classical guitar melody, before ‘This Endless War’ kicks in with the album’s dynamic conclusion. 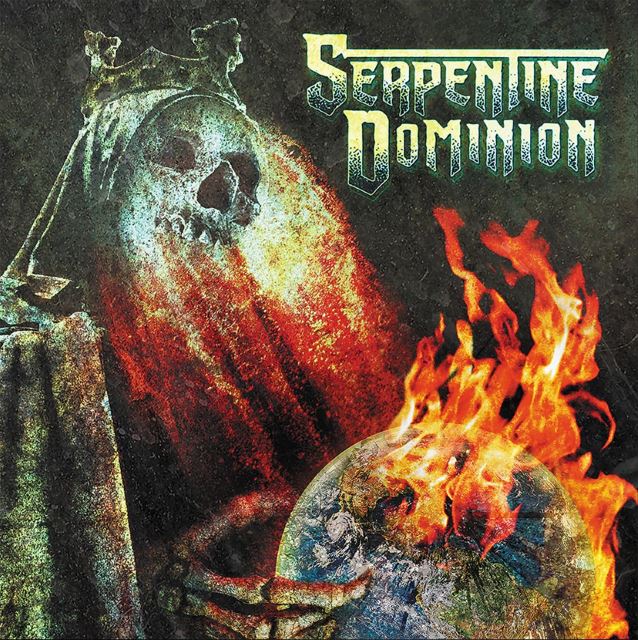 Although Adam Dutkiewicz was the initiator that put the project in motion, his focus was more on the musical side. According to Corpsegrinder: “I originally was going to write stuff [for the new band], and you know what? [Writing lyrics has] just never been my thing.” [1] Suffice to say, this would have been a different record had he written the lyrics. Dutkiewicz got Killswitch Engage vocalist Jesse Leach to pen the lyrics (initially as a ghostwriter) [2] and it shows. Songs about society, oligarchy, war, religion, and revenge will come as no surprise to Killswitch fans (especially of their later material) as they are no stranger lyrics of dark times and fighting oppression (“Deceivers/No more/Suffer this sickness/For intolerance/Plague the innocent” – ‘Vengeance in Me’).

An album like this comes with high expectations. It is the first album put out by a supergroup containing members of revered and seasoned heavy-hitters, and almost seven years in the making. Serpentine Dominion has a lot to live up to, and fortunately the album never comes close to underwhelming. However, fans of straight death metal and the old ultra-violence and gore of Cannibal Corpse will find familiarity in Corpsegrinder’s vocals and the musical execution, despite the lyrics not fitting the mold. This is very much Adam Dutkiewicz’s pet project, and elements of Killswitch Engage’s sound carry over here. Although Serpentine Dominion is dubbed melodic death metal, the melody comes from the metalcore tendencies of Dutkiewicz’s riffs applied to the vocals and Shannon Lucas’s drumming (‘Jagged Cross Legions’ is the best example of this fusion). Anyone expecting either a game-changer or more of what they have come to expect from Corpsegrinder and Dutkiewicz will put down their headphones having been entertained, but a tad dissatisfied. But any fan interested in the combined forces of metal veterans and the best attributes of their respective sounds will be far from disappointed.