Trending
You are at:Home»Interviews»Serpentyne: “I’ve always been inspired by powerful female figures throughout history – Joan of Arc or Helen of Troy, for example”.
By Nick Dunn on June 21, 2017 Interviews

Celtic mythology and artwork litter the British Isles – from the Celtic crosses in Ireland, through the Pictish stones in Scotland, to the replica village in St. Fagans, Wales. It is a subject rich in history, steeped in myth, and a source of gorgeous knotwork art. It has also found a home in metal and rock music, from Skyclad’s jolly folk-rock to the atmospheric black metal of Fen, or Cnoc an Tursa. Adding their catchy sound to the mix is English group Serpentyne, based in London. I sat down with vocalist Maggiebeth Sand and guitarist Mark Powell to discuss mythology, music, and Ritchie Blackmore.

Where some bands might borrow mythological artwork as an aesthetic choice, or occasionally thread a flute melody into their work, Serpentyne have been steeped in history and myth from the beginning. Frontwoman Maggiebeth Sand draws her inspiration from the powerful female figures of history: “I’ve always been inspired by true or legendary tales, and I’m particularly interested in myths or historical accounts or powerful female figures throughout history – Joan of Arc or Helen of Troy, for example.” Given this inspiration, it seems only natural to combine mythology and music in Serpentyne, starting with the use of acoustic instruments hailing from the time of medieval minstrels on their first album, Stella Splendens. This brings the music as close to its source as possible: “We learned a lot of the music … live during our performances at various castles and medieval festivals in the UK, France and Germany during that period of 2010-2012.” As they toured the European mainland, influences from bands as diverse as Eluveitie, Faun and Omnia crept in. The mediaeval roots of the music were maintained, but the instrumentation changed from a didgeridoo on Myths and Muses in favour of an electric guitar and bass for 2016’s The Serpent’s Kiss. A more unusual source of inspiration which they claim, outside the world of folk-metal, comes from Canadian artist Loreen McKennitt, whose work also focusses on mythic themes.

Folk-metal is not all hurdy-gurdys and didgeridoos, however. The mythology itself is also deeply important, particularly as a lyrical theme. Where Eluveitie write about Gaulish history, Serpentyne focus more on the Celtic myths of Britain and Ireland. Frontman Mark Powell cites The Cycle of Kings as a favourite work. The stories it contains are akin to the stories around King Arthur – in that the central figures presumably did exist, but we have little to no historical record of them beyond oral histories and legendary tales. One such figure is Conn of the Hundred Battles, whose story I encourage readers to look up for themselves.

Readers may be wondering what relevance this all has to the modern world, with the technological revolution we are currently living in pushing us further from the pastoral scenes usually depicted in fantasy and more towards the cyberpunk worlds of writers like William Gibson. As Maggiebeth points out, “[t]he success of films such as the “Lord of the Rings” series, and “Game of Thrones” shows that mythology has a huge appeal to many.” Guitarist Mark agrees, stating that the films and books “provide a kind of release – they take you from the modern world, with all of its worries, stresses and strains, into a different one.” In addition, he argues that their relevance to the modern world lies in portraying the battle between good and evil: “although they are a form of escapism, they also strike a chord with modern viewers or readers.” This is most topically notable in the tempestuous maelstrom of current Western politics: one only needs to look at how polarised Britain is in its views on Theresa May and Brexit, or literally anything Donald Trump does, to see a modern-day battle between good and evil that would rival anything in Tolkien or George R.R. Martin’s books. 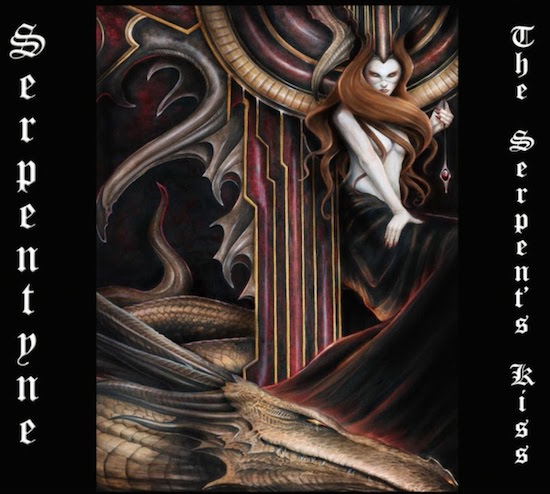 One of the band’s strongest influences is also one of their biggest supporters – Ritchie Blackmore. Not only is his work with Blackmore’s Night a strong musical influence on the band, but the man himself has supported them almost from the beginning, as described by Maggiebeth: “Back in our pre-rock days, many people compared us to Ritchie’s Renaissance-themed band, Blackmore’s Night, and we actually had a very nice and encouraging e-mail from him soon after we started, when he found some of our videos on YouTube.” For Mark, “Ritchie was actually one of the first rock guitarists that I heard as a kid, so you could almost say that he introduced me to the world of rock.”

So, what does the future bring for Serpentyne? A record label has made an offer, though no names are mentioned, which will hopefully lead to the next album being released later this year, leading into an extensive touring schedule in the festival circuit in 2018. As Mark says, “Watch this space!”

Thanks to Maggiebeth and Mark for their time, and Tom Brumpton for the opportunity. Serpentyne’s homepage is here, and they are on Facebook.