Trending
You are at:Home»Reviews»Metal»Servers – Everything Is OK
By Neil Criddle on August 22, 2016 Metal, Reviews, Rock
Band: Servers
Album: Everything Is OK
Record label: Undergroove Records
Release date: August 19th, 2016
Website & Facebook & Twitter
Purchase/Download
Tracklisting:
1. Spells
2. My Friends Are Enemies
3. To Hell With You
4. Unconditional
5. Our Lady of Bad Counsel
6. Codes
7. I Will Make You
8. Recklessly Extravagant
9. Bodies In The Ground
10. Into the Grave

2014 was a splendid year in the UK alternative music scene, with new records from Architects, Savage Messiah and Feed The Rhino rising to the top of a very crowded pile. However, it was the introduction of three mysterious hooded characters from Barnsley, UK known as Servers who quietly released one of the best debut records of that year, Leave With Us. Combining monolithic riffs with haunting melodic vocals, the band set their stall firmly at the feet of Baroness and Kyuss while delivering a masterpiece of brooding, modern rock/metal that the UK had been crying out for in the music scene for quite some time.

It has only taken a couple of years for Servers to dust off those hooded robes and set upon creating their second record Everything Is OK. The irony of the album title is evident from the opening track ‘Spells’ which delivers an atmosphere-laden guitar riff far more grandiose and doom-laden than anything on the debut. The six minute runtime may seem brave for an opening track but it whizzes past at a canter with barely a moment to process the melodic bombast emitting from the speakers. The track also picks up from the end of Leave With Us’ ‘Mother’s Grave’ with a quip from the same disembodied voice that delivered the Last Chance To Evacuate Planet Earth speech which finished the latter song, [1] an interesting connection point.

‘To Hell With You’ introduces a spoken word introduction from Christopher Hitchens [2] centred on religion, corruption and politics with the mainstream media followed up with an eye-wateringly heavy guitar riff followed by mind-numbingly harsh screams from vocalist Lee Storrar. The rest of the track is broken up with small periods of spoken word and softer interludes – demonstrating the variability in Storrar’s voice – but nevertheless this is hands down one of the heaviest songs the band have written. 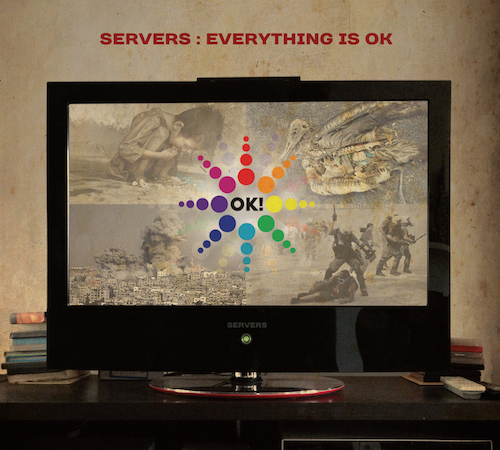 The themes of cult worshipping and brainwashing reappear from Leave With Us in the eerie ‘Unconditional’. Citing several Charles Manson references which adds to the creepiness. Those Baroness influences come through again thick and fast in the vocal and guitar arrangements, albeit with shedloads of diversity apparent amongst the clean vocals and periods of lurching impassioned screams backed by discordant guitars and an air of despair in the sound. That aforementioned diversity rears its head at several points during the album’s running time, such as with ‘Our Lady Of Bad Counsel’ sounding like a depressed Biffy Clyro (fairly upbeat for Servers…).

With no filler material evident in this record, the final couple of tracks bring this remarkably strong album to a close. ‘Recklessly Extravagant’ has a regal vibe to it – almost Oriental in places – while incorporating various electronic synth elements – a new inclusion into Servers’ overall sound. ‘Into The Grave’, conversely, is pure Ghost worship with hooky vocals, an impressively tight rhythm section and an assortment of all things catchy and retro.

Everything Is OK is a polished catalogue of impressively produced songs that show true progression from their debut. What Servers have produced on this album is wholly experimental, hugely accessible and ridiculously heavy in equal parts pushing the boundary of their sound to new heights.

Footnotes:
1. Full video of Last Chance To Evacuate Planet Earth Before It Is Recycled