I first heard Shepherd in 2012, a year after the band released its first demo. I saw them the following year opening for Blood Division at Bangalore.[1] At the time, the band was a four-piece and had a dedicated singer. This line-up hit its peak with their rendition of Motörhead‘s ‘Sacrifice’ [2] on the Indian Motörhead tribute album that came out in 2013.[3] Things didn’t quite work out, the singer left,[4] but the riffs lived on and Shepherd sprung back as what it is now – an all-round three-headed juggernaut.

Shepherd are an impertinent bunch; they have a wry sense of humour and a penchant for all things 90s. But most of all, they understand structure: every riff, every turn, every roar on Stereolithic Riffalocalypse contributes significantly to the beautiful mess that is this album. The song-writing is nuanced, dynamic and retains a lot its wanton, obey-the-riff vibe from the band’s early material. The music is well within the sludge side of the spectrum, with a lot of grit and an unmistakeable punk bent – the latter being an absolute standout. The sludge-punk weirdness is further bookended with a smack of early Seattle grunge (think Tad or Melvins). It is rather spectacular to hear how it all comes together. Be it the dripping tarriness of ‘Bog Slime’ that erupts into a bout of unhinged heavy rocking or the easy, sing-along swing of ‘Turdspeak’ – it is consistently exciting music that warrants complete attention. The genius lies in the volatility of it all; every song on the album is just raring to shape-shift. 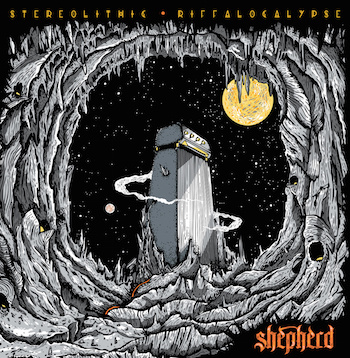 Namit Chauhan (guitars) writes the best riffs – his riffing is full of vim & vigour and relies heavily on instinct, in the sense that each riff takes time to occupy its space and often, explodes – a style much akin to Buzz Osborne (Melvins) or Greg Anderson’s work in Goatsnake. To add to this, Abhishek Michael’s well-judged bass-playing along with Deepak Raghu’s dynamical, at times frenzied drumming makes for a taut rhythm section. While everyone in the band sings, it is Chauhan and Raghu for the most part, singing in foul, whisky-soaked moans. The two harmonize remarkably, occasionally trying to channel Mike Scheidt (YOB) or Peter Stahl (Goatsnake).

All in all, it all works in their favour and contributes largely to their identity as a band. More than that, it propels them several cuts above the rest in their field. Stereolithic Riffalocalypse is one of the most accomplished sludge albums the year has offered so far. The band is clearly, very much in its element and has carved itself a niche in sludge music. Here is to more of Shepherd’s brand of sludge-punk goodness! 1-2-3-4!