Trending
You are at:Home»Interviews»Silver Dust: “With the magic mirror, the costumes, we wanted to create something that really makes a statement.”
By Catherine Fearns on August 25, 2017 Interviews

Rock and metal have always been inextricably linked with spectacle. From the Seventies shock-rock of KISS and Alice Cooper, the Satanic imagery of Black Sabbath, through glam metal’s hairspray, black metal’s corpse paint and the horror masks of Slipknot; even Eighties thrash metal’s anti-showmanship was a form of spectacle. Nowadays in the ‘post-album sales’ era, when touring is everything, all bands understand the importance of putting on a show, and metal abounds with themed and costumed bands such as Ghost and Babymetal.

Within this arguably saturated market, Swiss band Silver Dust are carving a niche for themselves with their unique brand of steampunk-inspired music. I caught up with them at Rock Altitude festival, where they were performing on home territory and proudly opened the main stage. Said drummer Mr Killjoy: “It’s a great honour for us to be here, and especially on the main stage on the same billing as Children of Bodom; we are very appreciative of being here and very happy. We are having a great time!” I asked frontman Lord Campbell to describe their sound. “What is coming out in the press is this idea of ‘Tim Burtonian Rock’. To clarify that further, we are rock/metal, with electronic elements, and an industrial side as well.” I hear a thrashy side to their sound as well, and I find Silver Dust at their best when playing heavier, riff-laden anthems. Lord Campbell has a wide vocal range and incorporates guttural growls and falsetto on top of his rich operatic style. He continues: “There’s a bit of everything in there. Also a few Eastern influences, and also some influences from classical music, it’s a mix of everything, our style is very unique, we don’t want to define it too much…”

It is not, therefore, a criticism to say that Silver Dust’s music is inseparable from their image. Their live performance is a dystopian Victorian circus, with the top-hatted Lord Campbell acting as a sort of ringmaster, the other musicians each playing their own character (Mr Killjoy – drums; Tiny Pistol – rhythm guitar; Kurghan – bass). Meanwhile a seemingly endless stream of beautiful women appear, both inside a clever magic mirror screen and in person, to perform the songs alongside the musicians. Steampunk is very appropriate for metal, and the band thought long and hard about their style. Lord Campbell reveals, “I wanted to create a group that was on my wavelength, we wanted to create an identity, so we talked about looks, modern and vintage ideas, the concept of steampunk, and I developed them with Kurghan. Then Mr Killjoy and Tiny Pistol arrived, to create Silver Dust one hundred per cent – they added what was missing.” 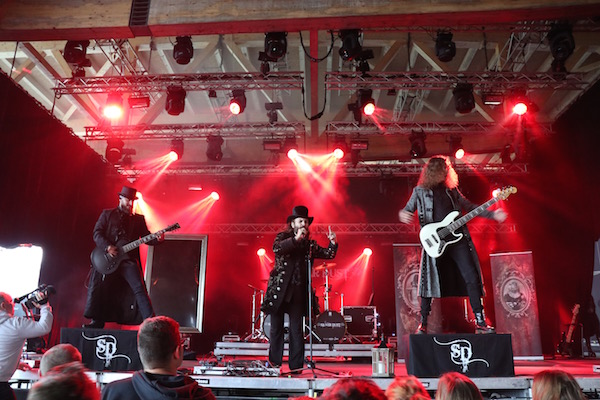 Kurghan adds: “We wanted to create something that really makes a statement… so with the magic mirror, the costumes, we wanted to create something that people really remember, to keep in their minds..”
While it does get a little cheesy at times, on what must have been a small budget Silver Dust have created a remarkably entertaining show. The absurdity works because they happen to be excellent musicians; Mr Killjoy performed an impeccable drum solo, and at one point Lord Campbell duetted Bach’s Toccata and Fugue with a phantom organist in the magic mirror. Silver Dust are not ashamed to throw the kitchen sink at their live show; it is part of their respect for their audience. Says Kurghan: “Nowadays artists need to make money from touring far more than selling albums, so the price of tickets is increasing. Therefore you need to assure a quality show; because when someone pays 50 francs to attend, it’s important to give them something they deserve…”

Silver Dust are from the town of La Chaux-de-Fonds in the Jura mountains, where watchmaking is the main employer; indeed bassist Kurghan is a watchmaker himself. They allude to the struggles of Swiss bands to break out internationally, a theme I came across repeatedly that evening at Rock Altitude. Kurghan comments, “There are loads of amateur rock/metal groups, but more on the German side of Switzerland than the French. In Zurich, Winterthur, Pratteln, there are lots of venues, but not so much in Geneva or Lausanne. And it’s very difficult to get out of Switzerland…”

Despite the geographical and possibly cultural constraints however, Silver Dust are working hard to make an international name for themselves. Their second album, The Age of Decadence, is heavier and more confident than their first and has some very catchy anthems (stand-out tracks are ‘Welcome’ and ‘My Heart Is My Saviour’). They see the fantasy/historical themes of the album as a reaction to the dystopian times in which we are living: “We are living in tumultuous, warlike times, we are entering a phase where everything happens very fast, one has to be very strong in everything. The album reflects a fundamental imbalance, a revolt against certain contemporary themes. We bring in animal causes, legends, we have our own particular stories… you see them in the magic mirror on stage. Check out our video!”

With an enterprising attitude (Lord Campbell drives the bus) and help from friends, they have managed to play in many European countries, and supported Finnish ‘monster rock’ giants Lordi on their European tour. This was a dream pairing for Silver Dust, as Mr Killjoy explains: “There are no words, it was exceptional, it was the best experience of our lives…” Another dream partnership awaits this autumn, as the band are excited to have been chosen by German power metallers Battle Beast as special guests on their European tour. Lord Campbell remarks, “We have a great November coming up – we’ve been invited as special guests on their European tour – Holland, Czech Republic, all over. It will give us lots more visibility, and to be chosen by their production team was amazing.”

Having only been around since 2013, things have happened quickly for Silver Dust, and they credit that with a combination of luck and hard work. Mr Killjoy: “It’s enough to fall on the right people and to have a good team, and then things click…” Lord Campbell follows up, “Also we are a very serious group, we work hard, we don’t drink, we don’t take drugs, we don’t say stupid things…” It’s worth giving Silver Dust a try, because what exudes from their music and performance is an enormous warmth and respect for their audience. Lord Campbell: “That’s the image of the group: the performance, the relevance… what can we give to the public. There is a lot of athleticism from us on stage, because we don’t want to be has-beens.”

Mr Killjoy: “We are fans as well, we know what we like, what we don’t like, so we want to do everything that our idols have done well.” For Mr Killjoy – who even named himself after one of their songs – Lordi have already provided him with his dream tour partner. So I ask the others, and they respond KISS, Guns N’ Roses, and Iron Maiden. No shortage of ambition then, but with Silver Dust’s enterprising creativity I wouldn’t put it past them… 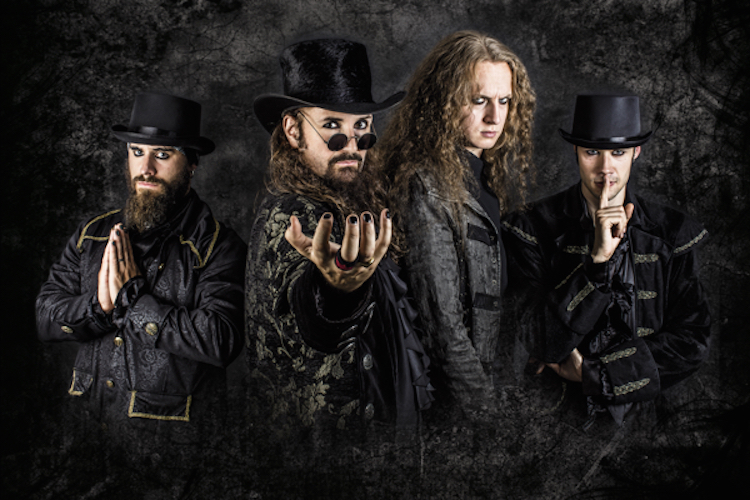 Thanks to Silver Dust for their time. You can check out the band on their website, Facebook and Twitter pages, and stream/purchase their second album via Bandcamp.