To best understand Skuggsjá, it’s important to understand the background to how this record came to be. Ivar Bjornson (Enslaved) and Einar Selvik (Wardruna) were originally commissioned to write Skuggsjá as a concert piece, to commemorate the 200th anniversary of the Norwegian constitution, and now given full release and further live performances. [1] It is, first and foremost, a piece of art celebrating history and heritage. The feeling the album gives off is one that even few within the realm of pagan or folk metal achieve. It is a deliberate, highly authentic attempt to explore the musical history of Norway, combining some of the oldest instruments and poetry in Norse and Norwegian with metal elements of more modern music, linking past with present in the traditions of folk music. [2] Considering the origins of the project (and especially the Nordic folk nature of Wardruna), it is fair to say that there are few metal albums out there like it, both in sound and story, even amongst other albums where the metal elements regularly take second place to the folk instruments. This is not an inherently a bad thing; rather, it means that Skuggsjá is an album that will take time to understand and fully appreciate, and an awareness of its origins is key to that.

It should be clear from early on that this is no typical pagan metal album. Right from the first moments of introductory track ‘Ull Kjem’, there is a weight and atmosphere to the music that does justice to its folk origins and intentions, and it’s not until third track ‘Makta Og Vanæra, For All Tid’ that metal guitars can be clearly heard. This is the one of the few tracks on the album that can be clearly described as metal, of a kind that unsurprisingly recalls Enslaved – more specifically, their Ruun and Isa albums – blending the brute force of metal with more ambitious, progressive song-writing. Double bass-drums and harsh black metal vocals combine with the guitars to produce the most direct track on the album, but the historical purpose of the project is not forgotten; traditional folk instruments can still be heard, and the group vocals – a recurring feature of Skuggsjá – ensure that the track sits well within the theme and feel of the album. 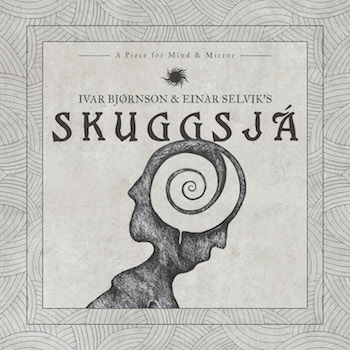 Over the course of Skuggsjá though, it is more often the case that the traditional folk instruments take the lead, and as a result, initial listens might perhaps be disappointing if you were expecting a pagan metal masterpiece, especially given that ‘Makta Og Vanæra, For All Tid’ is such an early highlight and demonstrates just how strong the style can be. Instead, Skuggsjá is a masterpiece of a different kind. The possibly unfamiliar and unexpected instruments being used so prominently can be a lot to take in, given that the guitars and drums are often used more as the basis of the songs, providing the background whilst the traditional folk instruments and clean vocals take centre-stage. There is still plenty of heaviness to the album, though it is mostly of a dark, emotional kind rather than sheer metal thunder. It has to be stated that, as celebratory as it feels at points, there are plenty of moments where Skuggsjá is a very oppressive, almost sorrowful listen, given extra gravitas by its purpose and authenticity (this contrast is perhaps most stark between the incredibly ominous ‘Rop Fra Røynda – Mælt Fra Minne’ and following track ‘Skuggeslåtten’, which is much more uplifting with its bright melodies and interplay between electric guitar and traditional taglharpa [3]). In many ways, this heartfelt atmosphere is one of the strongest points of Skuggsjá, and by giving the folk elements such prominence, the origins of the record and its purpose as a celebration of Norwegian history are done justice to.

It’s difficult to over-emphasise just how important the traditional folk elements are to Skuggsjá – they are far more important to the sound, ethos, and overall atmosphere of the project than the metal parts could ever be. In a lot of ways, to consider it as a pagan metal album feels wrong; such a description invites metal comparisons, whether it be to Bathory‘s Viking trilogy [4] or the more sombre likes of Primordial and Moonsorrow. None of these comparisons do Skuggsjá justice; instead, the only record I can think of that had similar aims, methods, and awe-inspiring success is OM by Negură Bunget, a similarly weighty mixture of metal and traditional folk music and structures, where the folk elements often took prominence over the metal aspects, to better serve the narrative and purpose of the album.

Approaching Skuggsjá with that in mind is key to enjoying and appreciating it; and even then, it may take several listens to fully understand. It is a remarkably deep, challenging album, and many of its charms take time to reveal themselves (such as the delightful way the closing track ‘Ull Gjekk’ features a subtle variation of the central melody to opener ‘Ull Kjem’; the way the tracks flow in to each other when the album is played on repeat is both musically impressive, and full of deeper significance). After a dozen plays, I still don’t feel like I have grasped half of what Skuggsjá has to offer, and my appreciation of it grows with each listen. Not a record for casual listening, then; but dig deep, and there are plenty of riches to be found.

Footnotes:
1. As well as the initial performance, the band have performed at Roadburn Festival, and will be performing at London By Norse on 19th March.

2. When I use folk music in this context I am referring to traditional folk music, where music is passed down through generations and is strongly linked to place and identity, rather than more the modern genre of ‘folk music’.

3. The taglharpa is a four-stringed bowed lyre, originating from Northern Europe; for an example of how it sounds solo, here is a video on Youtube.

4. Bathory’s Viking trilogy is considered to comprise the fourth, fifth, and sixth Bathory albums (Blood Fire Death; Hammerheart; and Twilight Of The Gods)