The biggest question that people have been asking about the new Slipknot album is in which way their sound was going to go. The band have not recorded music together for over four years, and are still reeling from the departure of Joey Jordison from the band in 2013, not forgetting that in 2010 the band lost somebody who was like a brother to them – their bassist and co-songwriter Paul Gray. These are factors which make it very difficult to sit down and write an album, compounded further when fans are tossing about the rumours on Twitter that Corey Taylor drove Joey Jordison out of the band so that he could write a Stone Sour record.

Bearing the above in mind, I doubt anybody was quite expecting .5: The Gray Chapter to sound quite like it does. We certainly expect it to be an emotional rollercoaster, but there is nothing that could prepare us for the pure filth and heaviness that exudes from every aspect of it. It is Iowa Mk. 2, with one distinction: it is even more sadistic and twisted than its predecessor. Iowa was born out of an emotional state where Slipknot were at each others’ throats after tumbling off the cramped tour bus they spent most their time on while heavily touring their début album. This allowed for an incredibly vicious album that is still continually recognised as being one of the best albums produced by a modern metal band.

.5 The Gray Chapter was born out of a similar emotional state, but with a couple of differences. Firstly, it has been four years since the band has released new material with All Hope Is Gone, and any such tour-created wounds have been allowed to fester. Secondly, as mentioned before, the album is also heavily influenced by Paul Gray’s passing. Many of the festering wounds this time round are linked to this. Percussionist Shawn Crahan stated in an interview with Rolling Stone [1] that losing Paul Gray was harder than losing both his parents. Put seven individuals who were affected by Gray’s death, give them access to the ability to create devastatingly heavy music and the end result is, quite frankly, utterly terrifying and emotional crippling.

This is an album Slipknot have put their heart and soul into. You can tell that there were moments where the various band members must have broken down into tears. A song that demonstrates this is the opening song ‘XIV’. It is, for the lack of a better word, a dirge. The entire song serves as a eulogy to Gray, but also contains a message of hope and unity for the fans of Slipknot. This is especially evident when vocalist Corey Taylor delivers the lyric “walk with me / don’t let this fucking world tear you apart.” From that point, everything launches into full-blown chaos. Slipknot unleashes the Iowa-like beast from thereon with ‘Sarcastrophe’, containing their typical loud and blisteringly intense guitar riffs and blast-beats that result in utter pandemonium at concerts. Slipknot managed to combine the pure sadism and viciousness of Iowa with the melodic harshness of All Hope is Gone. This just makes the album seem even more cruelly sadistic. In typical Slipknot fashion they deliver a multitude of songs that shock you, with ‘Custer’ being one of the most terrifying song present on the album. Snarling guitars and furious drumming lead you into the song and then Taylor delivers a terrifying spoken word piece before launching into a violent rap section. 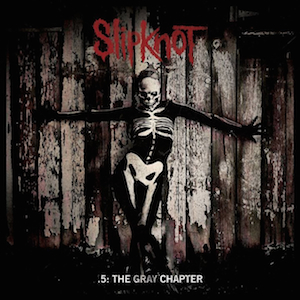 Throughout the course of the album, Taylor demonstrates that he never had the intention of making .5: The Gray Chapter sound like a Stone Sour album by delivering brutish unclean vocals in his typical rapid bursts of violent aggression. His clean vocals, instead of all sounding pulled off a Stone Sour album, seem to revert back to the rather harsh-sounding singing heard emerging from Vol. 3: (The Subliminal Verses) and then easily shifting to the soaring cleans that he perfected for Stone Sour. This adds a change of mood to the album, as he can easily spew vitriolic hate, which usually references “the negative one”, and then veer to lamenting and paying tribute to his fallen friend. ‘AOV’ and ‘The Devil In I’ are especially good examples of portraying the shift between hate and lamenting. ‘Skeptic’ also pays tribute, adopting a similar sound to the tragically beautiful ‘Vermillion Pt.2’. Concerning ‘The Negative One’, people may be led to assume that this is about Joey Jordison, but it is in fact about Corey Taylor’s own self-loathing, especially pertaining to Gray’s death. In an interview with Faster Louder[2], he speaks about how he felt a sense of self-loathing for not doing enough to help his best friend.

The brilliant thing about the album is that – instead of simply adopting a one-dimensional sound and remaining in their comfort zone – they lift themselves to new heights by exploring new sounds. For instance, the goth-metal sound of ‘Killpop’ borders on the macabre, with a whispering of industrial synth subtly curling itself around carefully drop-tuned guitar riffs, and a rhythmic intensity to the drums. The bass riffs often tower above the rest of the song, and give it a freakishly eerie quality on the bridge. Corey Taylor’s vocals shift between sneering clean vocals and cauterising uncleans, as he does so well.

.5 The Gray Chapter is by far their heaviest and best album to date, and this isn’t just the incredibly happy thirteen old within saying this. This is the Slipknot I grew up with, the Slipknot that got me through my first year of high school and fuelled my love for nu-metal. Slipknot is a testament to overcoming the greatest difficulties and emerging stronger than ever. Here is to another generation of moshers being created due to this album.