Belfast and Liverpool have a strong bond on Slomatics‘ Future Echo Returns. The Irish lads had their latest album produced by Chris Fielding at the Jon Davis-owned Skyhammer Studios – both members of northerners Conan – and the record sees a continuation in monumental doom that overpowers the listener. The two groups’ careers have grown simultaneously, and both have important releases this year; Conan’s Revengeance showed a great deal of impactful songwriting as well as clever evolution back in late January, now Slomatics’ fifth full-length is their chance to follow their sludgy brethren’s example.

Unlike the dark, fantasy-obsessed doom of Conan, Slomatics’ music has a cosmic edge that influences the band’s engulfing sound, giving it a grander scope. Their clobbering metal looks out into the vast universe, whilst keeping its feet firmly within the dense smoke of doom metal. As such, Slomatics’ sound is enveloped by an electronic, futuristic haze, rather than the murky gloom of most sludge metal.

However, Future Echo Returns is still heavily invested in the world of crushing sludge, as it suffocates the listener under the weight of hefty riffs and uncompromising fuzz – all despite the band not having a bassist. Slomatics’ slow-paced riffs are a touch more melodic than the average doom outfit, allowing them to smoothly grace the listener in a style which is less polarising to those unfamiliar with the genre. The album’s sci-fi doom is delivered via a staggering production, which gives it an unbridled power that is unstoppable once it gets going. 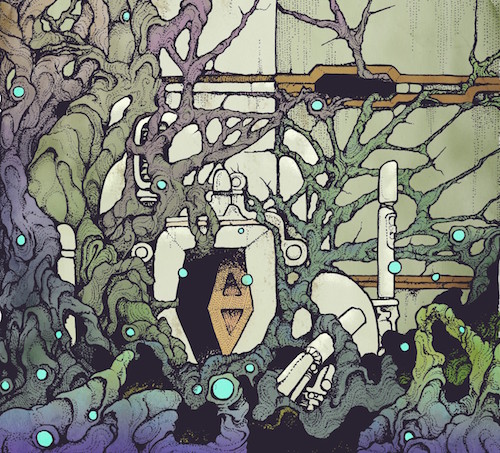 Slomatics evolve beyond simply assaulting the listener with their forceful riffs; they use spacey synths to achieve varying effects. Their subtle use of ‘Ritual Beginnings’ sees Slomatics fully embrace the universe beyond our planet, delivering a moment of uncharacteristic, post-rock-esque tranquillity before ‘Rat Chariot’ brings encompassing metal back into the fray, as well as colossal drone-like noises that paint pictures of monolithic robot overlords.

Drummer M. Harvey’s vocals are used sparsely to great effect, with his voice occasionally emerging from behind the wall of fuzzy guitars. This puts his vocals on a level playing field with the listener, such as within the smothering riffs of ‘Electric Breath’, where he tries to break through the wall of hazy production to greet the listener face-to-face. On closer ‘Into The Eternal’ his vocals truly soar, with oohs and ahhs that would seem almost silly were it not for the effective way in which they replace the album’s synths.

Well-crafted and a heck-of-a-lot more innovative than most, Slomatics expertly fuse the world of doom, which rarely strays beyond its own incense-filled borders, with an outward-looking and forward-thinking sensibility that breaks free from the constrictions of its genre, without ever turning its back on it. Though much of Future Echo Returns still engulfs the listener in Slomatics’ trademark impenetrable wall of unfathomable heaviness, it holds a futuristic nature, as if the group are stood gazing up at the stars from within a gloomy fog, pondering the implications of escaping.