Sometimes it can be a nightmare being a band on social media. For every respectful and good-hearted fan, there is someone who crashes the party, succeeding in pissing off band and fans alike in the process. This article series is for those people, to provide a bit of education and guidance about how to interact with bands online in a way where everyone is happy. There are two points for band pages and two points for musician profiles. Enjoy.

1. Begging To Play Shows
“Come play my city!” “Why don’t you play this country ever?” “Why do you play this venue? It’s shit!”. Let’s be honest here, we see this comment on a daily basis now and almost think nothing of it cropping up in every status of a relatively successful band. Almost.

What may surprise some of you, is that bands actually have far less control of where they play than it seems, and the act of booking a tour goes through many hoops before the final schedule is drawn up. Travel routes, visas, budgets and a whole manner of other logistics need to be factored in, and very often sacrifices need to be made.

So, if you are desperate for a certain band to play in your area, here is what you need to do. Find out who your local metal promoters are, or the e-mail address of the person who books bands for the venue, and contact them with information about the band. Make sure to do this in a respectful fashion, without caps lock and exclamation marks. Also ensure the band are right for the venue: a recently-formed hardcore punk band are unlikely to play a classical concert hall. If the venue or promoter is interested, they will certainly get in contact, either with you or with the band directly.

And make sure this doesn’t happen.

N.B. This tactic works even better when you know the band are touring and looking to fill in dates. So keeping an eye on their social media helps.

2. “New album! New album! New album!”.
It’s almost a betting game: how long will it be before some fans pop up and start harassing a band for new material. With a frequency only topped by pestering comments for touring (and spam comments for bigger bands), any status that doesn’t have the words “writing”, “recording”, or “studio” in is usually met by a slew of fans whining about why the status doesn’t have those three words in it.

But here’s the thing.
Think of a time when you’ve been pressured by others to deliver a project, whether in school or a job or even something among friends. Now imagine multiplying that by the number of people who remind a band on a regular basis that the fans’ needs will not be sated until they create some music. Not just any music, though, it must be high quality, at least as good as the last album if not better. And failure to comply to these standards brings a whole new level of disparaging comments on the band’s page.

So instead of relentlessly badgering your preferred bands to make new records, particularly bands who are not renowned for being especially prolific in the first place, consider the amount of stress that goes into making an album and try to understand that these musicians are still fundamentally human. Even the ones who do music for a living are not necessarily able to work night and day on making new music, when they’re not touring or doing press or any of the myriad of tasks associated with being in a band. And ultimately, the old maxim of ‘good things come to those who wait’ will most likely continue to ring true.

Now we move into a touchier realm, that of adding musicians on their private accounts. Some people are open with their profiles, and seem to accept pretty much any friend request from fans. But this adds an element of trust, and it can be all too tempting to break the unwritten rules of adding a famous musician on Facebook. There are several things you can do or not do to stay respectful, but these two come out on top as the most obvious ones.

3. “Heyyyy Stevey!”.
A musician you deeply admire has accepted your friend request, congratulations! So you get really excited, and temporarily forget that your new-found friend may not actually know who you are. You see their status updates, and comment on them in a chummy manner, presuming that your Facebook friendship entitles you to actually being their friend. One day you pluck up the courage and send them a message, perhaps a simple “Hey, how’s it going?”. A couple of days pass, and you hear nothing. Perhaps you can see the message has been marked as seen, perhaps not. You give them a week of grace, then send a follow-up message with much a similar message as before.

Let’s face it. If you’ve added a musician who has 3,000 friends, chances are they are not going to know every single one of them personally. Even if we take Dunbar’s Number theory as a conservative estimate, we cannot realistically remember that many people. [1] Now bear in mind that, even if you have met this particular musician, it’s usually one fleeting memory across one tour where you meet hundreds of people. Before hitting send on that message containing your wrath that your musician ‘buddy’ has not replied to you, remember the following:

1. This person may not know who you are.
2. They may have tens of other messages of a similar ilk sitting in their inbox.
3. They probably do not have the time to reply to every single one of them, let alone engage in conversation with every one.

So, a suggestion. While it may be very cool to be able to talk to someone you deeply admire in such a personal way, it may be better to refrain from doing so unless you have a genuine reason to message them. And no, that doesn’t mean asking for updates on upcoming material.

4. “4,975 people have tagged you in a photo!”
This is geared more towards Facebook, but Twitter also has the ability to tag people in photos. [2] Regardless of the platform, you need to be considerate in the photos that you tag people in. All too often you see blurry photos of concerts with the band members tagged, or even generic photos where the band aren’t present, just to get their attention. 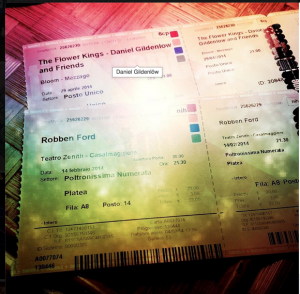 Is this strictly necessary?

In this case, ask yourself why you are tagging the band member in this picture. Is this the kind of impression that you want to give as a fan? Furthermore, are they going to want this representation of themselves to be visible to all who are connected with them? Put yourself in the musician’s shoes and consider the implications of a similar action on your profile.

I suppose the fundamental overarching principle to take away from this, one which is all-too-easy to forget in the face of fandom, is that musicians are humans too, regardless of the stature of the band in question. Bear this is mind as you interact them, and your interaction as a fan on social media will go a lot more smoothly.

Stay tuned for the second installment, with further exploration of the dos and don’ts in the minefield of social media band etiquette.