How do Sólstafir follow a record like 2014’s widely lauded masterpiece Ótta? Played live in its entirety with accompanying piano and strings, the 2016 tour for it was a sterling success [report here]. So, what do you do when you want to make the next album? You knuckle down and get on with making Berdreyminn: a record just as good, but in a very different way. It would have been foolish to simply make another Ótta, or a record similar in style. It simply would not have worked. Instead, Berdreyminn explores some of their more esoteric influences, showing off the proggy, ambient bands they clearly admire, and in so doing, expose something of their soul to the listener. Fair warning, dear reader: listening to it may make you cry.

The warm, lush soundscapes of Ótta and Svartir Sandar have been traded for a faster paced ride through bleak, emotive songs that ultimately leave the listener wholly satisfied, yet still wanting more. It is the pace of the songs, and moreover the emotional depths they plumb, that sets this album apart from its predecessors. Right from the off, ‘Silfur-Refur’ rockets along, not a single second of its nearly seven minutes wasted, and following swiftly on is ‘Ísafold’, home to one of the best bass riffs and drum fills this year is likely to produce.

‘Hula’ is the most emotive song on the album, slowing the pace down for a piano-led ballad. The crowning moment of the song appears just before the four minute mark, leading into the climax: soaring choirs join in, with layers of pure, clean vocals reaching deeply into soul, tugging on the heartstrings. It sends chills down the spine, raises the hairs on the back of the neck, and could very easily make you cry. The coarse, angst-ridden edge to Ađalbjörn Tryggvason’s vocal style only adds to the emotional depths. His emotive vocals are skilfully deployed throughout the album: of particular note in this regard are ‘Hvít Sæng’ and ‘Ambátt’, which showcase how easily he can convey emotional fragility with his voice, weaving it seamlessly in with the guitar and piano’s mournful melodic lines. 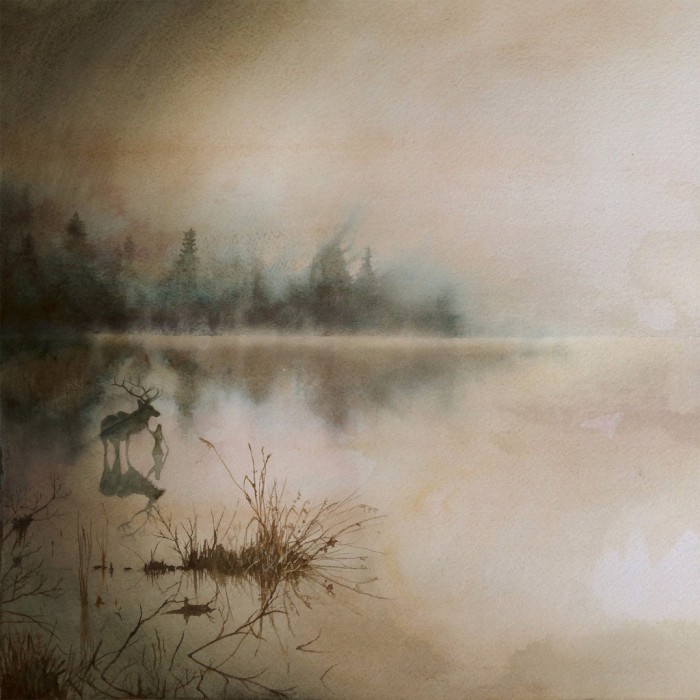 The Sólstafir canon is not without its emotive moments – previous prime examples being ‘Lagnætti’, ‘Fjara’, and ‘Necrologue’ – but Berdreyminn captures the band at their most emotional. The melodies are keenly mournful – even on what might be the happiest song ‘Ísafold’, the mood is rarely lifted above ‘gloomy’ – and Tryggvason’s anguished vocals are given more prominence in comparison to the musicians than on previous albums. Thus the record drips with a weary sorrow, one that even the relative pace of the album cannot lift, making the album a very cathartic experience for the listener and, perhaps, for the band themselves given the recent split with founding drummer Guđmundr Óli Pálmason.

This is not to say that emotion is the entire focus of the album. Berdreyminn delivers a lot for listeners to chew on. No two songs sound the same, and it is a very different beast to the current discography. It still retains the atmospherics of the previous works, but these are woven more into the layers of the songs, rather than serving to create a sonic arc as with Ótta. Listeners can still bask in the music, but where the songs on Ótta formed one glorious soundscape that washed over the listener, Berdreyminn pushes the listener to engage with each song on its own merit. They are all carefully constructed works, built on layers of sound that swell into crescendoes, and die away again to exhibit an emotional core. Thus, no song is without its hidden depths. ‘Hvit Sæng’ initially present itself as a simple piano ballad, but the carefully deployed strings and guitar, along with the undercurrent of quiet synth bass and solemn drum lines in the first half anticipate the heaviness of the latter half. That heaviness is a surprise, on first listen, perhaps designed to shock the more apathetic listener into paying attention, and the band does turn on a dime from quiet to loud, but the climax is foretold from the beginning if one pays attention.

This is not to suggest the band have abandoned playing metal. The fearsome riffs of ‘Nárós’ and ‘Bláfjall’ are testament enough to that, recalling the band’s earlier, heavier roots without straying into the black metal territory they left behind on Svartir Sandar. The short bass solo in the middle of ‘Ísafold’ is a masterclass in dexterity, followed by a drum fill that John Bonham himself would have been proud of. New drummer Hallgrímur Jón Hallgrímsson acquits himself excellently – were it not for the furious spat kicked up by Pálmason, the lineup change could have gone unnoticed.

Ultimately, Berdreyminn represents the continued evolution of Sólstafir’s sound. They have long eschewed the black metal sound that made their name, favouring more the expansive and emotive sounds of post-rock mixed with a heavy rock sound. The exhibition of unadulterated emotion on Berdreyminn is phenomenal, born from mournful melodies buoyed along with pace and fervour. The layers and layers of sound ensure that the album is one to keep coming back to, and is certain to place highly on Album of the Year lists. It may even top them.