Arguably, one of the defining characteristics of black metal is a sense of duality. Even more than blast-beats or tremolo picking, black metal at its best is built upon a foundation of both musical violence and a sense of grandeur. Whilst other genres of extreme metal may largely seek to batter the listener with ferocity and volume, black metal will also often possess a strong melodic aspect, balancing brutality with a kind of warped beauty. The new release, Spirit Warfare: Demo MMXVII, from US black metal act Sovereign is further evidence of this paradigm. For sure, the demo may be cloaked in a low-fi, raw production, and the music may often be played at a blistering pace, with vocals as vicious as you could hope for; but there is also real melody throughout, with evocative, glorious hooks, leads, and riffs that will stay in the memory for days. It’s a mighty impressive release, and leaves an impression that lasts long after the tape has finished playing.

Despite hailing from the US, and members having previously played in bands such as Woe, to describe Sovereign as playing USBM would be misleading. Instead, a better point of reference would be Young and in the Way, with whom guitarist/vocalist M.S. has previously performed. There is a comparable sense of danger and intensity to Spirit Warfare as there is that band at their best, with plenty of moments of blackened crust fury. Yet the melodies in the riffs and leads are often reminiscent of Finnish black metal more than anything else – the riff at the 1:30 mark of ‘Diadem Of Wound’ is a prime example, and compares favourably with almost anything that Horna mainman Shatraug has written [1]. In comparison, the opening moments of ‘Hammer Of Fevered Light’ draw heavily from Cascadian black metal. Combined with the raw production, the varied, restless nature of the songs makes for a devastatingly intense listen. Spirit Warfare is full of dangerous energy and moments of dark grandeur, transitioning to and from malevolent maelstroms seamlessly. 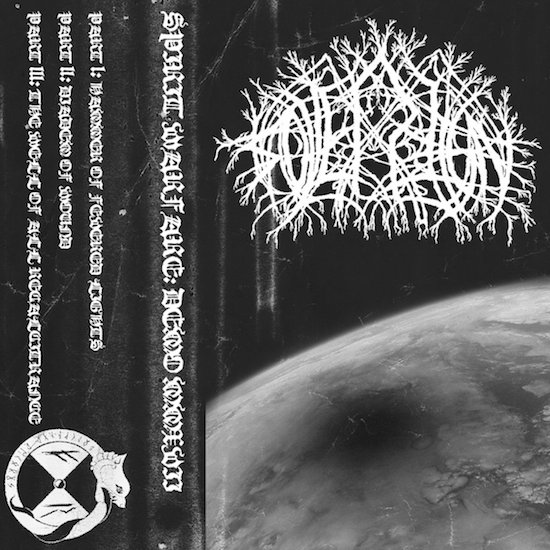 The production is one of the most immediately noticeable aspects of Spirit Warfare, and whilst some may find its raw, abrasive nature acts as the perfect way in which to present black metal such as this, there, may well be those who find the production that bit too raw – this is very much a demo quality recording, in both a positive and negative sense. The low-fi character of the recording certainly lends Spirit Warfare extra punch, but there’s also a sense that details are being lost in the mix. These are more than counterbalanced by the sense of energy and urgency the production helps provide, but if you’ve ever felt that Transylvanian Hunger’s production made it unlistenable, you may want to steer clear of this tape.

For those who can tap in to what is being offered though, Spirit Warfare is worth your time and attention. It may be short – third track ‘The Well Of All Recalcitrance’ is essentially an extended outro – but whilst it may be short, Spirit Warfare is never lacking in quality. Here is hoping for more to come from Sovereign, as this demo is hugely impressive.

Footnotes:
[1] as well as forming Horna, Shatraug has also been heavily involved with Behexen, Sargeist, and a host of other underground black metal bands, whether for recordings or live performances.