Spiritual Beggars: a band whose members have an unquestionably impressive list of musical achievements in their varied projects. Sunrise To Sundown, the third album from the band’s current lineup (their tenth overall), showcases exactly how comfortably this band play together and how versatile they are, especially when you consider their collective projects elsewhere comprise of an extreme variety of styles and artists. As you delve into the world of Spiritual Beggars, you are instantly drawn into a hybrid of music based mainly in the 70s, but there is much more here on offer than rehashing that era. As the band’s sound has evolved across more than two decades of existence, and with this latest offering, they continue to add an eclectic yet often subtle mix of more modern genres and other influences.

With eleven tracks on Sunrise To Sundown, and no major weakness on individual tracks, each subsequent song allows the album to grow stronger. Catchy melodies and memorable vocal lines are scattered throughout its entirety, playing off the consistently heavy retro riffs, groovy bass lines and solid, punchy drums that keep the tracks feeling tight and unified. That they chose to record ‘off the floor’ – as opposed to individually tracking – just further shows just how tight-knit the group really are even with the limited time they get to perform together.

The members of this band, as previously mentioned, are a motley crew, with everyone bringing something different. Michael Amott’s guitar work may be better known for darker, heavier riffs and lightning fast solos in the melodic death band Arch Enemy. He shows a different side to his musical chops here, providing dirty blues riffs and catchy hooks alongside more emotive solos. His typical style of playing does seep through occasionally, but as it seamlessly integrates into the mix and gives an edge to the music, there’s no room for complaint on this. Per Wiberg, better known as ex-keyboardist for progressive rock (formally progressive death metal) band Opeth, is no stranger to 70s organs and psychedelic keyboard arrangements, bringing these into the fold for added layers to unpack. 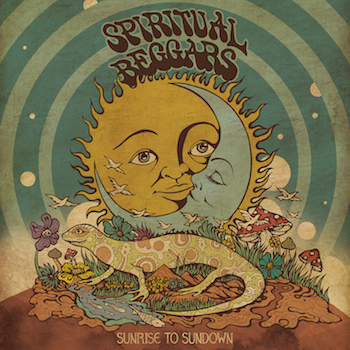 Apollo Papathanasio shows exactly why he should be fronting Spiritual Beggars, possessing a powerful voice and massive range – which you would do as ex-frontman for Greek power metallers Firewind – as he commands attention but also knows exactly when to tone it down; compare the chorus of ‘Diamond Under Pressure’ chorus to the eclectic ‘Turn To Stone’. This latter song is also of note for being a sharp deviation from the album’s formula: an intriguing combination of primal drum rhythms and dark organ sounds dominate Papathanasio softer vocals, whereas in almost every other song on this record he is the focal point when he sings.

While the title track is a strong showcase of exactly what the band represent, each song brings something different and is enjoyable for its own reasons; the versatility of the album becomes clearer with consecutive listens. With that in mind it is no surprise just how much each member gets to shine at their instrument of choice. While some tracks rely heavily upon guitar-based melodies, there are moments where this is put on the backburner to allow the keyboards to shine through. The track ‘Diamond Under Pressure’ is one such example, as the main point of focus throughout is a brilliantly old school organ sound propelling the song along. There’s a surprising amount of ground covered, from the perfectly executed guitar solo in ‘What Doesn’t Kill You’ to the overall unhurried feel of ‘Southern Star’, and plenty more besides.

Repeat listens make it is crystal clear that Sunrise To Sundown is a well-balanced blend of retro and modern rock styles. Catchy and memorable throughout, it’s easy to love and hard to fault. There is no reason why this album shouldn’t appeal to several generations of rock lovers. Those who grew up in the 70s and 80s will feel right at home, but the music still feels fresh and exciting. Spiritual Beggars are a perfect example of what rock music in its purest form is all about: loud guitars, catchy vocals and, most of all, a huge amount of fun.